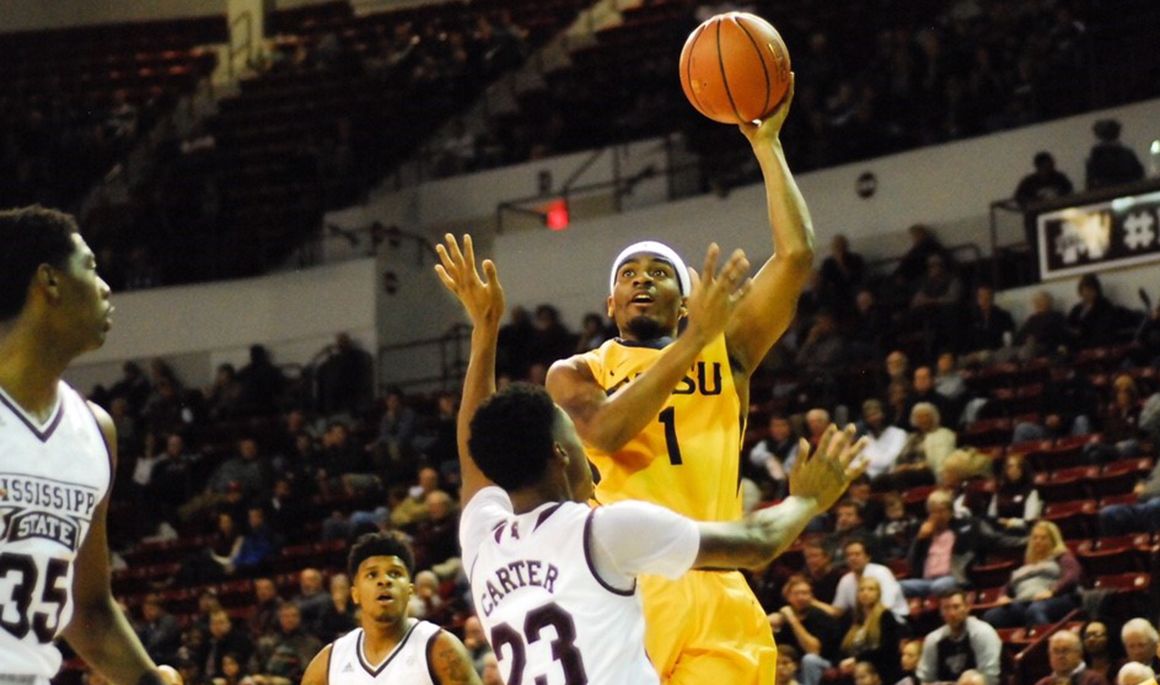 The Bucs, who led much of the game and by as many as 10 points in the second half, improved to 8-2 on the season and are now 3-1 all-time against the Bulldogs. Meanwhile, Mississippi State dropped to 6-3 on the year.

“I thought we played a complete game tonight and that’s not something we did in our last game on Saturday (at Dayton),” said ETSU head coach Steve Forbes, whose team has now beaten Power 5 Conference foes in back-to-back seasons after dropping Atlantic Coast Conference member Georgia Tech a year ago. “We were a lot more physical and tougher today. Two big things that were important to me coming into this game were turnovers and rebounding. And we did the job in those areas tonight.

“This Mississippi State team is going to be good. They are young but really talented. This is a good win for us.”

Mosquera-Perea’s heroics came after the Bulldogs’ Lamar Peters hit a 3-pointer to tie the game at 65 with 10.4 seconds left. Following a timeout by Forbes, junior guard Desonta Bradford (Humboldt) drove the ball up the floor and attempted a jump shot from the right of the lane that missed the mark. On the rebound, junior forward David Burrell (Milwaukee) got his hand on the ball and attempted a second shot before Mosquera-Perea corralled that miss and put back the game winner on a third try.

For the game, Bradford finished with a team-high 15 points to lead the Bucs’ attack, while senior guard T.J. Cromer (Albany, Ga.) had 14 to represent ETSU’s only double-figure scorers on the night. The Bucs finished the game out-rebounding the Bulldogs 36-35, outscoring them 38-32 in the paint and 25-16 in bench points.

The first half went well for the Bucs, who trailed 12-11 before putting together a 13-4 run to take a 24-16 lead with eight minutes left before the break. For the remainder of the half, the Bulldogs tried to cut into the lead and ultimately closed with a 5-2 run to trail 31-26 at the intermission.

In the opening 20 minutes of play, the Bucs shot 48 percent from the field while holding Mississippi State to a 37 percent clip. In addition, ETSU finished with a 20-14 edge on the boards and outscored the Bulldogs 20-12 in the paint. Cromer led the way offensively, scoring a game-high 10 in the first half.

After the break, the Bucs continued to attack the rim in transition and a thunderous dunk by Bradford gave ETSU its largest lead of the game at 42-32 with 15:36 left in regulation.

However, at that point, the Bulldogs began to eat away at the ETSU advantage, getting to within one at 50-49 with eight minutes left and then tying the game at 54. The Bucs regrouped from there and led the rest of the way before Peters’ game-tying shot with 10 seconds left.

The Bucs will now move on and wrap up their current three game road stretch on Saturday, when they take on Ohio Valley Conference foe Morehead State at 2 p.m. ETSU’s next home game will be the long-awaited matchup with Tennessee at Freedom Hall in Johnson City on Dec. 22. For more on ETSU men’s basketball throughout the 2016-17 season, visit ETSUBucs.com and click on the men’s hoops link.