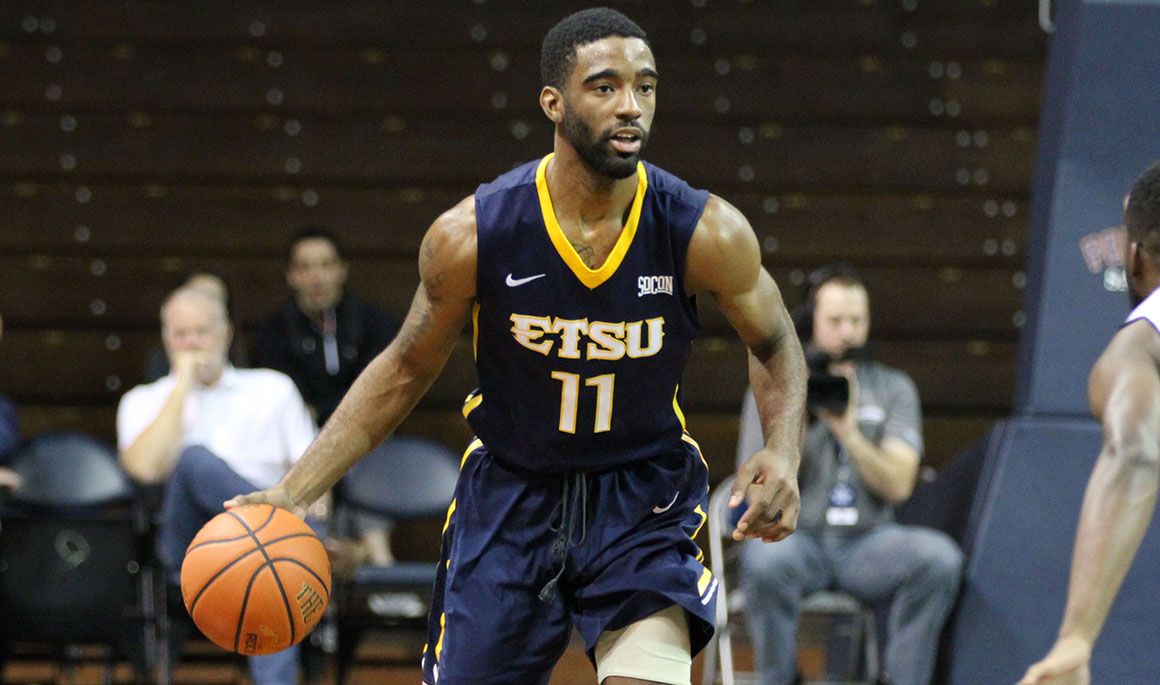 MOREHEAD, Ky. (Dec. 17, 2016) – With a last-second win in its previous game against Southeastern Conference opponent Mississippi State and a long awaited home contest with Tennessee looming on the horizon next week, Saturday’s game with Morehead State seemed like a perfect trap game for the ETSU men’s basketball team.

But the Buccaneers would have none of that.

Building a lead of as many as 23 points in the first half, the Bucs held off a pair of comeback attempts in the second half and bested the Eagles 78-68 Saturday afternoon inside Ellis Johnson Arena. With the win, the Bucs have won seven of their last eight games and improved to 9-2 on the season, while Morehead State dropped to 2-8.

“They did this to us last year when we got up by 20 and they battled back, so we knew this was going to be a hard game,” said ETSU head coach Steve Forbes. “This is a good win and we had some nice numbers statistically, but what I’m really proud of is how this team grew up this week. We bounced back from the Dayton loss last week with a big win at Mississippi State on Wednesday. We get back up early on Thursday morning and head home. Practice yesterday and then come up here and win. That says a lot about these guys.”

Shooting 50 percent from the field and 53 percent from 3-point range for the game, the Bucs were led by senior guard T.J. Cromer (Albany, Ga.) with 23 points and seven assists, while fellow senior Hanner Mosquera-Perea (Istmina, Colombia) and junior guard Desonta Bradford (Humboldt) finished with 13 points apiece. Cromer and Bradford combined for nine total 3-pointers on the night, with Cromer hitting six and Bradford going a perfect 3-for-3 from outside the arc.

In the first half, the Bucs enjoyed one of their most proficient offensive efforts of the season to build a 44-29 lead at the break. While the 15-point advantage at the intermission was positive, the Bucs had led by as many as 23 after going on an impressive 18-3 run midway through the half.

The Eagles managed to cut back into the Bucs’ cushion thanks to an 8-0 run that became a 17-7 spurt and made it 42-29 in favor of ETSU with 28 seconds left in the half. MSU had what appeared to be the final possession of the half, but a missed shot led to a long rebound for ETSU senior forward Tevin Glass (Norcross, Ga.), who turned that fortuitous bounce into a layup as time expired, giving the Bucs their 15-point halftime lead.

Cromer powered the Bucs’ offense in the opening 20 minutes, scoring 12 points on a 4-of-6 effort from 3-point range. The Bucs did share the scoring fun, as 10 of 11 players to step on the floor scored in the first half and ETSU dished out 12 assists. Meanwhile, the ETSU defense was stingy, holding MSU to 32 percent shooting from the floor and 25 percent from 3-point range. The Bucs also out-rebounded the Eagles 21-19.

After the intermission, Morehead State made its move, outscoring the Bucs 13-7 over the opening seven minutes of the second half to cut the ETSU lead to nine at 51-42. The Eagles stayed within nine until the Bucs put together its own 14-3 run powered by a pair of threes from Bradford and another from Cromer, which made it 67-47 in favor of ETSU with nine minutes left in the game.

Instead of going away, the Eagles battled back again with a 14-4 run of its own to cut the ETSU advantage to just eight at 71-63 with four minutes left in regulation. However, that’s as close as Morehead State could get as the Bucs hit their foul shots down the stretch.

The Bucs’ next game will be back in Johnson City on Thursday, Dec. 22, as ETSU hosts in-state rival Tennessee in a highly-anticipated matchup with the Volunteers at a sold out Freedom Hall. For more on ETSU men’s basketball throughout the 2016-17 season, visit ETSUBucs.com and click on the men’s hoops link.