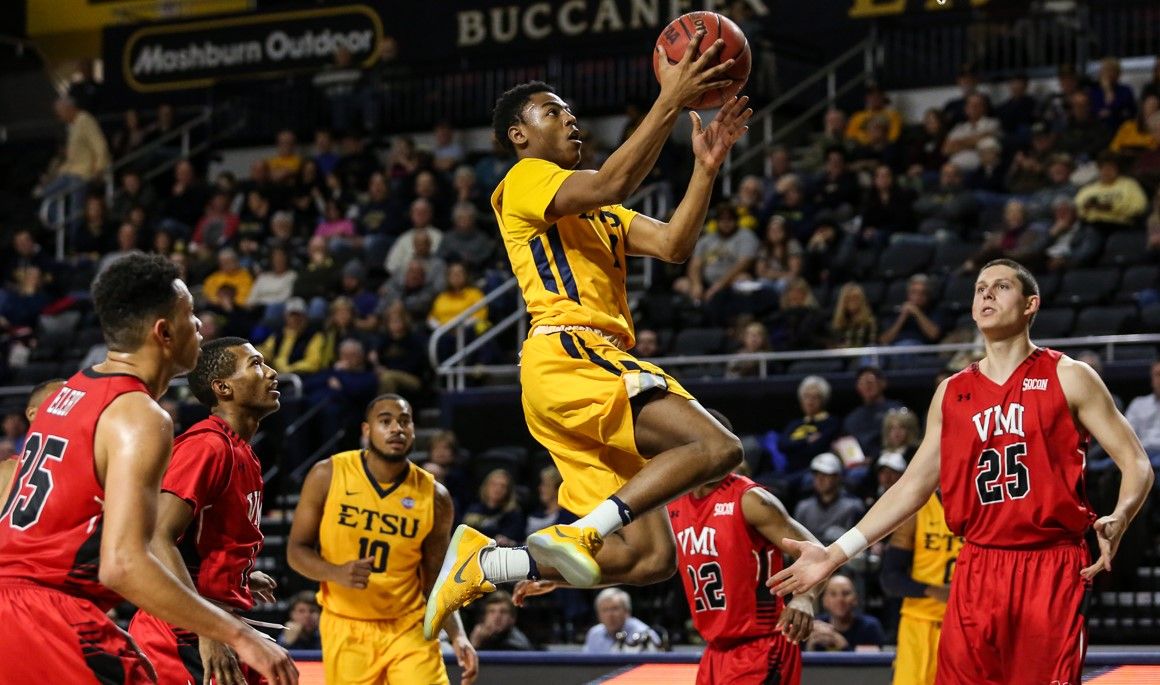 JOHNSON CITY, Tenn. (Dec. 31, 2016) – Prior to Saturday’s Southern Conference opener against VMI, the storyline coming from the ETSU men’s basketball team had been that this game with the Keydets was the most important game so far this season. The Buccaneers certainly played like it.

With a relentlessly hounding defensive effort and an offensive showing that included multiple dunks along with long-range 3-pointers, the Bucs rolled in dominating fashion to a 102-75 win over the Keydets. With the victory, ETSU improved to 11-3 overall, 1-0 in SoCon play, while VMI dropped to 3-9, 0-1.

“I’m really proud of our team,” said ETSU head coach Steve Forbes. “I thought in the second half we really turned the game defensively. We got a lot of stops and that’s something we talk about a lot, especially getting three strikes or three stops in a row. That led to offense for us because we got a lot of run outs. I thought our athleticism showed today as well, especially defensively.”

The final statistics certainly backed up Forbes’ comments, as the Bucs dominated in nearly every part of the game. Shooting 56 percent from the floor and 77 percent at the foul line, the Bucs also out-rebounded the Keydets 37-24, collected 14 steals, forced 20 turnovers, dished out 18 assists, and outscored VMI 48-18 in the paint and 30-7 in points off turnovers. In fact, every player on the Bucs’ bench played and scored.

Senior guard T.J. Cromer (Albany, Ga.) led the way with 21 points for the Bucs, while juniors David Burrell (Milwaukee) and Devontavius Payne (Carbondale, Ill.) posted double figures with 12 and 10 each.

It looked like it would be ETSU’s day early on, as the Bucs matched their highest offensive output in a first half this season, scoring 47 points in the opening 20 minutes. ETSU slashed to the rim time after time, and used their size advantage under the basket to out-rebound VMI 18-11 and outscore the Keydets 26-10 in the paint during the first half.

Shooting 53 percent from the field and 72 percent at the foul line, the Bucs led by 47-35 at the halftime break. Defensively, the Bucs held the SoCon’s scoring leader QJ Peterson – who entered the game averaging 18.5 points per game – to only six points in the first half.

For VMI, guard Julian Eleby finished with 21 points to lead the Keydets, while Peterson netted 16. Other VMI players to reach double figures were Keith Smith and Armani Branch, scoring 11 points each.

Following three straight games at Freedom Hall, the Bucs will now embark on a two-game road swing in SoCon play, beginning with a visit to The Citadel on Thursday, Jan. 5 at 7 p.m. in Charleston, S.C. For more on ETSU men’s basketball throughout the 2016-17 season, visit ETSUBucs.com and click on the men’s hoops link.