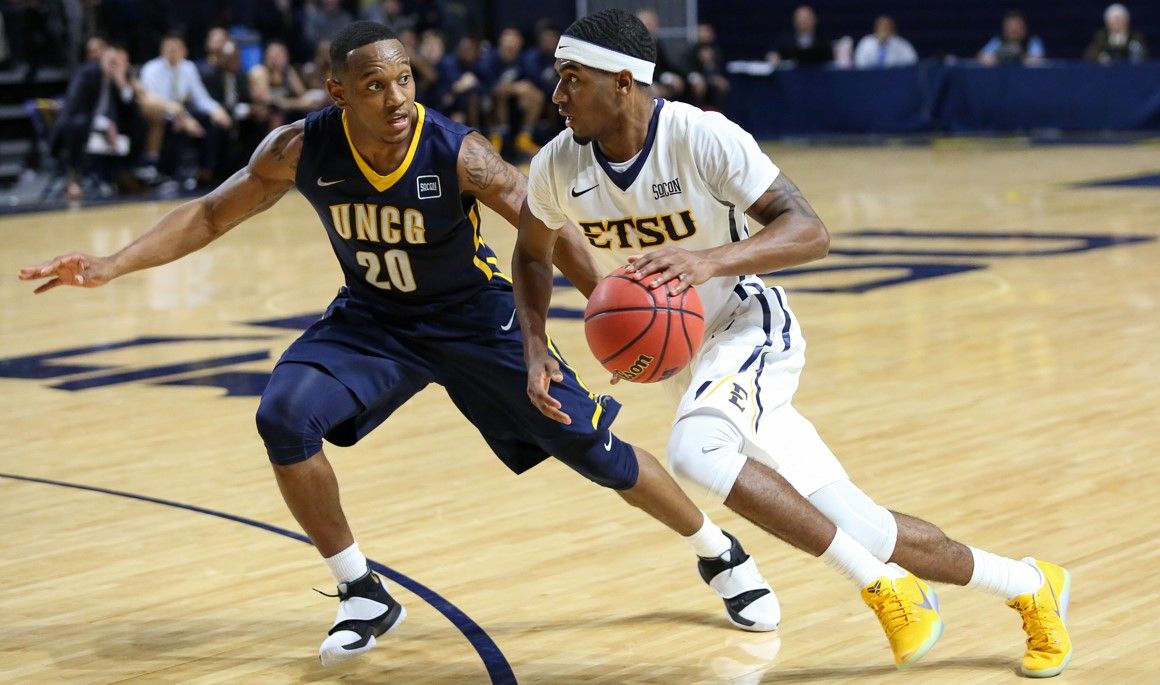 JOHNSON CITY, Tenn. (Jan. 12, 2017) – It took an uncharacteristically good shooting performance and an individual player hitting more threes in a single game than he had all season, but the UNCG Spartans were glad to take the effort in a hard fought 83-79 win over the ETSU men’s basketball team Thursday night at Freedom Hall.

In a matchup of teams atop the Southern Conference standings, the Spartans connected on 13 3-pointers, shot a remarkable 65 percent (13-of-20) from beyond the arc, and got five 3-pointers from post R.J. White – a player who had made three 3-pointers all season – to improve to 13-5 overall and 4-1 in SoCon play. Meanwhile, the Buccaneers – who entered the game in first place – remain tied for first in the loss column, dropping to 13-4 overall and 3-1 in league action.

“It was a hell of a game,” said ETSU head coach Steve Forbes, whose team led 75-74 before being outscored 9-4 down the stretch. “It came down to them making five more threes than us, they made 13 for the game, and No. 33 (White) made five. You’ve got to tip your hat to him because that means he made only one of his six made shots in the paint, which is a big time performance for a post. I’m not frustrated and I told our team that they competed their butts off and fought tonight. There are good teams in this league. It comes down to they made 13 threes to beat us by four.

“It’s not like we’re in last place after this one. We’re still up there with everyone else in our league. You just have to move on to the next one.”

While White finished with 18 points on a 6-of-13 effort from the field – 5-of-7 from 3-point range – the Spartans also got a game-high 23 points from guard Francis Alonso, while teammates Diante Baldwin and Marvin Smith added 15 and 10 points, respectively. For the Bucs, junior guard Desonta Bradford (Humboldt) scored a team high 17, junior forward David Burrell (Milwaukee) had 15, senior guard A.J. Merriweather (Jackson) added 12, and senior post Tevin Glass (Norcross, Ga.) netted 10.

In the first half, the Bucs raced ahead, scoring the first nine points of the game to take a 20-10 lead with 10:21 left before the intermission.

However, at that point, the Spartans hit their first 3-pointer of the game and never stopped shooting from outside. Going 6-of-8 from beyond the arc in the first half and getting a game-high 15 points from Alfonso in the opening half, UNCG outscored the Bucs 33-17 the rest of the half to take a 43-37 lead into the break.

After the half, the Bucs turned up their defensive effort, holding the Spartans scoreless for over five minutes of game play and cutting their lead to two at 50-48. Unfortunately for the Bucs, they also struggled to score at that point and were unable to take the lead despite multiple opportunities to do so.

The game remained close and UNCG led 69-67 before Burrell took over the game. Over a two-minute stretch, the junior dunked for a score, blocked a shot, and then hit back-to-back 3-pointers to put the Bucs up 75-74 with 2:36 left in the contest.

Unfortunately for ETSU, the Spartans responded with a 7-0 run, as Alonso made a runner in the lane, White connected on his only two-point basket of the game, and Baldwin nailed a game-clinching 3-pointer that put the Spartans up by six with 50 seconds left in regulation.

The Bucs will be back in action at Freedom Hall Saturday, hosting SoCon foe Western Carolina at 4 p.m. For more on ETSU men’s basketball, visit ETSUBucs.com and click on the men’s hoops link.