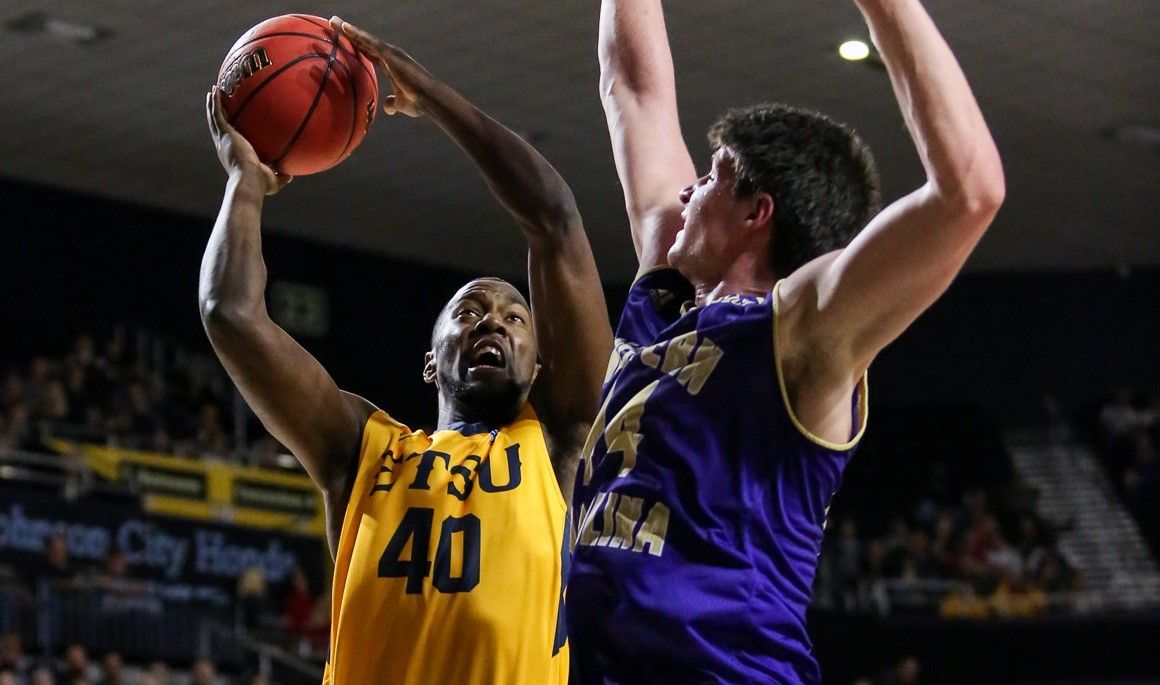 Senior post Tevin Glass scored a game high 14 points and collected eight rebounds, going 7-of-7 from the field in the win over Western Carolina.
Bucs race to early lead and cruise past WCU, 75-52
Western Carolina at ETSU | January 14, 2017
Related Links

JOHNSON CITY, Tenn. (Jan. 14, 2017) – Making its first seven shots of the game and shooting 73 percent in the first half, the ETSU men’s basketball team built a 21-point halftime lead and then cruised to a 75-52 win over Southern Conference rival Western Carolina Saturday afternoon inside Freedom Hall.

Senior posts Tevin Glass (Norcross, Ga.), Hanner Mosquera-Perea (Istmina, Colombia) and Isaac Banks (New Orleans, La.) combined to go 14-of-15 from the floor on the night to power the Buccaneers’ offense and improve ETSU to 14-4 overall, 4-1 in SoCon play. Glass finished with a game high 14 points and eight rebounds while shooting 7-of-7 from the field, and Mosquera-Perea collected 12 points on a 4-of-4 shooting effort.

Defensively, the Bucs hounded the Catamounts relentlessly, forcing 27 turnovers and holding WCU to just 36 percent from the floor. With the loss, Western dropped to 5-13, 0-5.

“We came out really focused today and ready to play,” said ETSU head coach Steve Forbes, whose team rebounded from its first league loss which it suffered in its last game against UNCG. “After a tough game like we had on Thursday night, sometimes you wonder as a coach how we are going to be mentally. I thought our guys set the tone on offense in the first half, but defensively we really played hard as well. That was the real difference in the game to me.”

Indeed, no Western Carolina player finished in double figures on the night, and the Bucs actually hit more field goals in the first half alone (19) than the Catamounts had in the game (17).

The Bucs’ inside game was the story of the first half, as Glass and Mosquera-Perea combined to shoot a perfect 10-of-10 and helped the Bucs post such a high percentage as a team. Making matters worse for the Catamounts, ETSU’s defense forced 14 turnovers on eight steals.

Those numbers resulted in a 46-25 halftime advantage for the Bucs. Glass’ individual stat line was impressive, as he finished the half with a game high 14 points and four rebounds to go along with two steals.

In the second half, the Bucs moved ahead by as many as 30 before both squads emptied their benches when the result became clear.

Senior guard T.J. Cromer (Albany, Ga.) was the only other ETSU player in double figures with 12 points, as the Bucs finished the game shooting 57 percent from the floor as a team. ETSU dominated the game statistically, holding a 31-27 edge on the boards, while outscoring Western on points in the paint (44-22), points off turnovers (23-10), fast break points (12-0) and bench points (25-14).

The Bucs will now return to the road for a matchup with Furman in Greenville, S.C. on Thursday, Jan. 19. For more on ETSU men’s basketball throughout the 2016-17 season, visit ETSUBucs.com and click on the men’s hoops link.