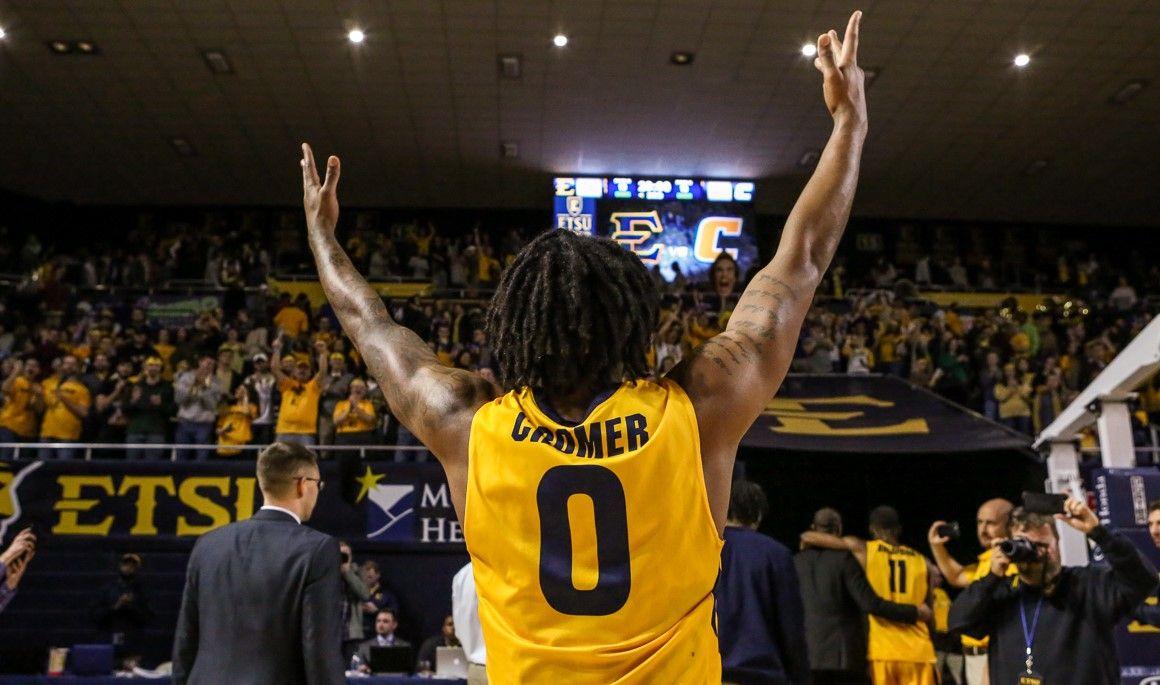 JOHNSON CITY, Tenn. (Jan. 28, 2017) – With the opportunity to best its archrival, the ETSU men’s basketball team went to the power game – and it worked.

With the win, the Bucs improved to 17-5 overall, 7-2 in conference play, and are now tied for first with Furman in the SoCon standings after the Paladins win over UNCG earlier in the day. Meanwhile, the Mocs (15-6, 6-3) dropped to fourth and are a half game back of third-place UNCG.

Glass finished with 14 points and 12 rebounds on the night, while junior guard Desonta Bradford (Humboldt) posted a team high 19 points and senior guard A.J. Merriweather (Jackson) finished with 13 in the winning effort. Along with his 18 points, Mosquera-Perea finished with nine rebounds himself and was clutch in the final minutes, going 7-of-9 at the foul line.

“We talked a lot today before the game about not having any regrets, and to just make sure you play hard and leave it out there,” said ETSU head coach Steve Forbes, whose team out-rebounded the Mocs 43-28 and shot 74 percent from the foul line for the game. “I thought we played our guts out. They are a really, really good team and we knew they were going to make their runs, but we matched them each and every time. It is a tremendous team win for our guys over a good team.”

The game lived up to the hype from the tip, as the level of play by both teams met expectations. Chattanooga used a 10-2 run to go up nine at 15-6, but ETSU’s defense clamped down at that point, holding the Mocs to just two field goals over the next nine minutes of play. While UTC struggled to score, the Bucs went on a 21-5 run to lead 27-20 with 5:09 left before the intermission.

Unfortunately for the Bucs, a second foul on Bradford sent him to the bench for the remainder of the half, and the Mocs took advantage by outscoring the Bucs 14-7 the rest of the way to tie the game at 34 just prior to the break. In the first half, the Bucs out-rebounded UTC 23-17 and blocked seven shots.

After the break, the game continued to be a back-and-forth affair, with the lead changing five times over the first 13 minutes of the second half. The Bucs did pull ahead by seven at 52-45, matching their largest lead of the game, but UTC quickly went on a 9-1 run to regain the lead at 54-53.

It remained a one possession game until the Bucs’ big men once again made their presence felt. First, a block by Mosquera-Perea led to a 3-pointer in transition by Bradford with five minutes left in the game. On the next UTC possession, Mosquerea-Perea pulled down another rebound on a missed shot, was fouled and then hit two free throws to make it 62-58.

While the Mocs would get back to within two at 63-61, a pair of free throws from Bradford, another rebound and two more free throws from Mosquera-Perea, and a steal and score from Glass in transition powered a 6-0 ETSU run that made it 69-61, bringing the fans at Freedom Hall to their feet.

UTC would get back to within three at 72-69 with 40.1 seconds left, but ETSU continued to hit its free throws down the stretch, going 14-of-18 over the final four minutes of play to ice the win. The Mocs were led by a game high 21 points from guard Greg Pryor, while Mocs’ post Justin Tuoyo finished with 15 and Johnathan Burroughs-Cook added 10.

The Bucs will be back on the road in SoCon play Thursday night, when they travel to face VMI in Lexington, Va. Tip is set for 7 p.m. For more on ETSU men’s basketball throughout the 2016-17 season, visit ETSUBucs.com and click on the men’s hoops link.