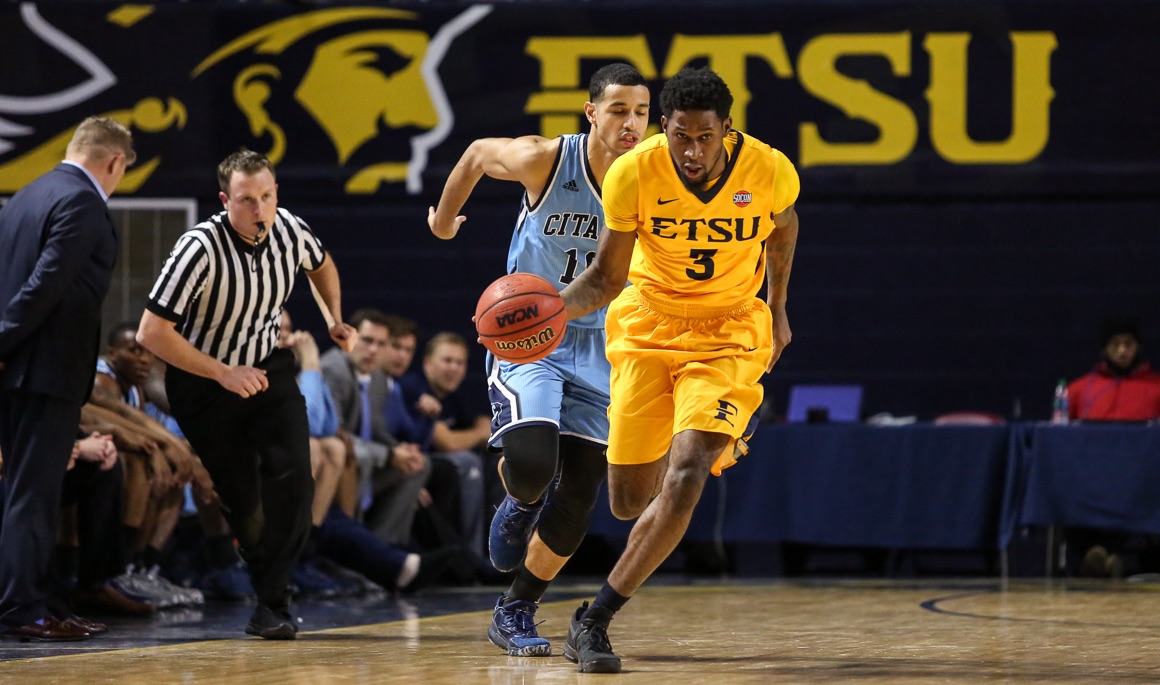 Junior David Burrell celebrated his 22nd birthday with 11 points and five rebounds on Thursday.
Bucs bounce back with 90-69 win over The Citadel
The Citadel at ETSU | February 09, 2017
Related Links

JOHNSON CITY, Tenn. (Feb. 9, 2017) – Coming off a tough three-point loss at Wofford on Monday, the ETSU men’s basketball team was in search of bouncing back into the win column.

The Bucs did just that as four players scored in double figures – including a team-high 17-point effort by senior guard T.J. Cromer (Albany, Ga.) – as ETSU capped off the season sweep over The Citadel with a 90-69 victory on Thursday night inside Freedom Hall.

Joining Cromer in double figures were juniors Desonta Bradford (Humboldt, Tenn.) and David Burrell (Milwaukee, Wis.), along with senior Hanner Mosquera-Perea (Istmina, Colombia). Bradford and Mosquera-Perea both finished with 12 points, while Burrell – who was celebrating his 22nd birthday – added 11 points and five rebounds in 20 minutes off the bench. Perea ended a perfect 6-of-6 from the field and totaled four rebounds and three blocks, and Bradford pulled down six boards and dished out four assists. To go with his 17 points, Cromer also filled up the stat sheet with five rebounds and five assists.

As a team, the Buccaneer defense held the nation’s leading scoring team 24 points below their single-game average, along with limiting them to 34 percent shooting (24-for-71). ETSU’s offense shot 49 percent (32-for-66), while the Bucs’ 14 three-pointers were one shy of tying a single-game program record. Burrell and Jason Williams (Detroit, Mich.) combined for 6-of-10 from beyond the arc. ETSU also moved the ball well as they assisted on 18 of its 32 makes, while the bench generated 37 points.

“This was good, solid win for us tonight. I thought we defended for all 40 minutes as we held them to 34 percent from the field,” said head coach Steve Forbes, whose team extended its home win streak to four straight. “It’s always important now to win every game. If we win the rest of our games, we will be in really good shape. We have to take it one game at a time and can’t look down the road. Mercer will be a tough game on Saturday. We have to come ready to play.”

ETSU – who hit six threes during its run midway through the half – shot 47 percent from the field (16-of-34) and 50 percent from beyond the arc (9-of-18). The Buccaneer bench accounted for 21 points as 10 different players reached the scoring column in the opening 20 minutes. Cromer led all players with 11 points, while Burrell and Williams each pitched in with six points off the bench.

In the second half, ETSU’s lead never dipped below double figures as the Blue and Gold scored the first four points after the break to go back up by 17, but the Bulldogs didn’t go away. The Citadel pulled within 10 when Preston Parks drained one of the Bulldogs’ 15 three-pointers to make it 55-45 with 13:59 remaining, but that’s as close as the visitors from Charleston would get. Over the next seven and a half minutes ETSU posted a 25-11 run to go ahead 80-56 on another triple by Burrell, while a Bradford three with less than two minutes to go gave the Bucs their largest lead of the night at, 88-63.

Parks led all scorers with 22 points on 7-of-16 shooting, while Tom Koopman finished with 10 points and three rebounds for the Bulldogs.

ETSU continues its homestand Saturday afternoon when the Bucs take on Mercer at 4 p.m., inside Freedom Hall.