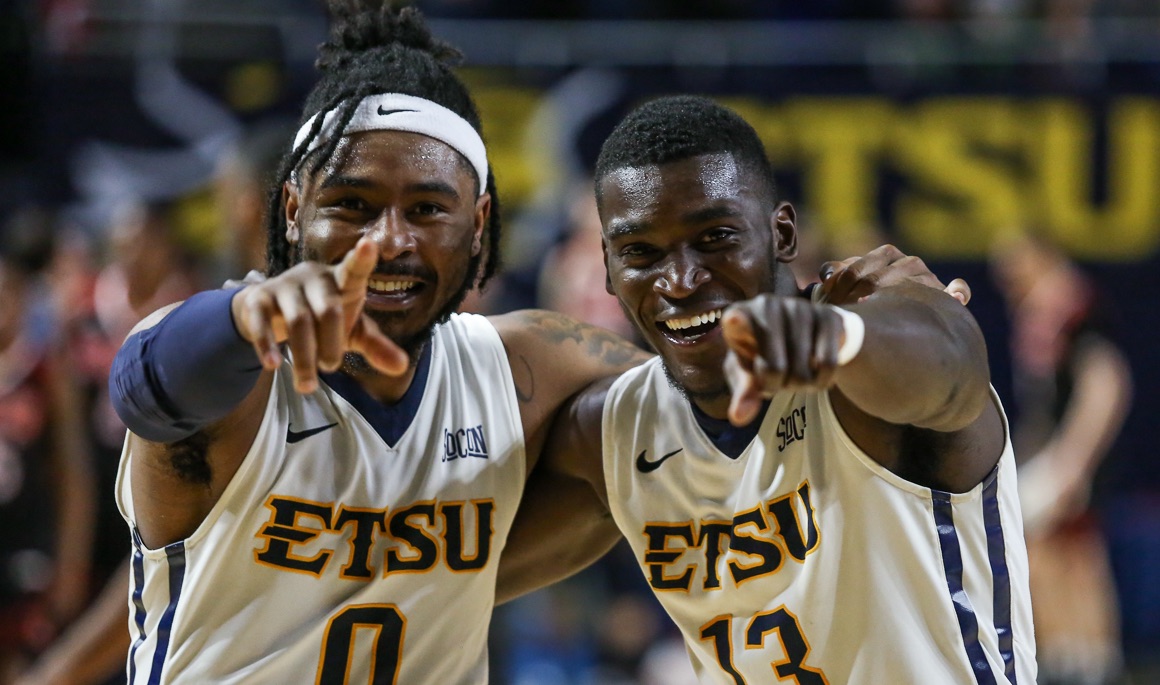 The Buccaneer senior duo both reached their respective mark in the first four minutes of the contest as ETSU opened on a 22-8 run en route to downing Mercer, 88-71, in front of 5,225 fans on Saturday afternoon inside Freedom Hall.

Cromer entered the game needing only five points to reach the club, while Merriweather needed six and they combined for 38 points on 14-of-22 shooting. Cromer finished with 28 points and sits 36th all-time with 1,023 career points, while Merriweather is 39th with 1,004 career points. Cromer also added eight rebounds and six assists in 31 minutes. Ironically, it was Cromer’s second assist of the night which resulted in Merriweather’s 1,000th career point as the Jackson, Tenn. native drained his three-pointer at the 16:02 mark, while Cromer’s clinching bucket came one minute earlier.

ETSU – who extended its home win streak to five straight games – improved to 20-6, 10-3 in Southern Conference play. The Bucs have now posted back-to-back 20-win seasons in the Steve Forbes era, marking the fourth time in program history ETSU has accomplished the feat in consecutive seasons. The 20-win campaign marks the 12th time the Blue and Gold have reached the mark since the 1988-89 season.

“I thought our guys came ready to play today. We played really strong for 40 minutes and got off to a great start against a quality opponent,” said Forbes. “We played well on both ends of the court and really shared the ball. We also cut down on our turnovers and I was really pleased with that. We had great balance with four guys in double figures and we got solid play from our bench, as this was our third game this week. I thought our depth was a big factor in getting the win tonight. Mercer deserves a lot of credit because they didn’t go away and they are a tough team to play.

“It’s an incredible accomplishment for both T.J. and A.J. to reach the 1,000-point milestone in the same game. This is something they will always have with them for the rest of their lives. A.J. is one of the best student-athletes that I have ever coached. He’s a great person, great student and great player. With T.J., I have coached a lot of junior college players and I can’t remember one reaching 1,000 points in two seasons. What he has accomplished is really hard to do at the Division I level. He’s a really good player and having a tremendous year.”

ETSU sprinted out of the gates to start the game as they scored eight of the first 10 points before taking a 22-8 lead when Cromer laid one in at the 13:16 mark. After making eight of their first 11 shots during that opening run, the Bucs saw their lead balloon to 34 as ETSU held Mercer scoreless for over five minutes and led 39-15 on a Tevin Glass (Norcross, Ga.) lay-up with 5:58 remaining in the half. The Bears closed the half on a 12-5 run, but ETSU still led by 17 at the break, 44-27.

For the half, the Bucs shot 53 percent (18-of-34) and out-rebounded Mercer by 13, 25-12. ETSU turned nine offensive rebounds into 10 second-chance points, while the Blue and Gold also outscored the Bears by 12 in the paint, 20-8. Cromer and Merriweather combined for 22 points in the opening 20 minutes.

Like they did on Thursday, the Bucs never saw their lead dip below double figures in the second half.

ETSU led by 18 early in the half and went up 61-45 following a David Burrell (Milwaukee, Wis.) layup with 10:09 remaining. From there, Mercer used a mini rally to pull within 10, 61-51, but then Bradford found Payne for back-to-back threes to extend the Bucs’ lead back to 16 with less than seven minutes left. The Bears would get as close 12, 83-71, but the Blue and Gold scored the final five points en route to improving to 12-0 when scoring over 80 points this season.

Mercer had won four of its last six games prior to today, but the Bears moved to 12-15, 6-8 following the setback. The Bears have now lost five straight to ETSU as the Bucs now lead the all-time series 18-8.

Jordan Strawberry and Ria’n Holland combined for 31 points in the loss. Strawberry finished with a team-high 16 points.

ETSU wraps up its three-game homestand Wednesday night when the Bucs host Samford at 7 p.m. inside Freedom Hall.