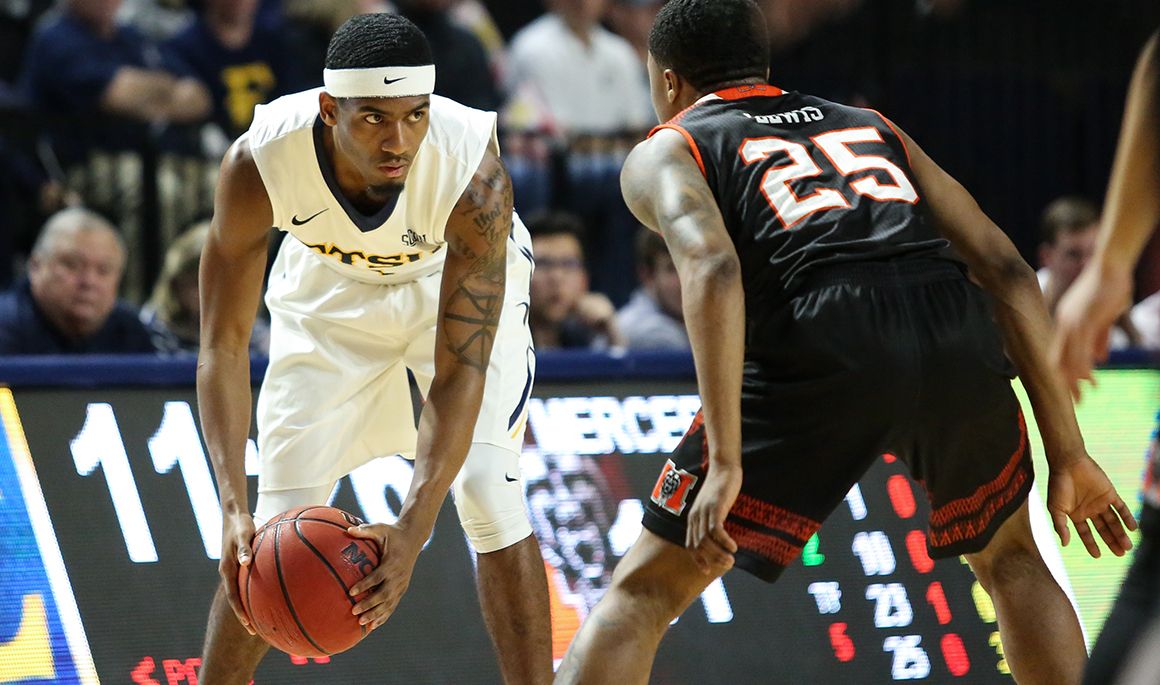 The second-place Bucs (20-6 overall, 10-3 SoCon) find themselves one game back of first-place Furman in the loss column of the conference standings. In addition, a road trip to Chattanooga is also looming on Saturday before a second matchup with the Paladins, which is scheduled for Wednesday, Feb. 22, inside Freedom Hall. Meanwhile, Samford (15-11, 6-7) will be trying to avenge a double-overtime home loss to ETSU earlier this year in Birmingham, Ala., and seeks to improve its seeding for the SoCon Tournament later this season in Asheville, N.C.

For those unable to attend Wednesday’s game, the contest will be streamed live on ESPN3 with “Voice of the Bucs” Jay Sandos (play-by-play) and Bruce Tranbarger (color analyst) on the call. Fans can also listen to the call on WXSM-AM 640 beginning with the Atmos Energy Pregame Show at 6:30 p.m. Live stats will also be provided via StatBroadcast or by visiting BucsStats.com. For tickets to Wednesday’s game, please call the ETSU Ticket Office at (423) 439-3878 or click on the ticket link at ETSUBucs.com.

In his first season as head coach of the ETSU men’s basketball program in 2015-16, Steve Forbes wasted little time reinvigorating the Buccaneers’ program with an energetic style of play, an engaging approach with the fan base, and plenty of success on the court … In all, the Bucs finished the with 24 wins – which marks the program’s third highest win total in the modern era – and collected 14 victories in Southern Conference play, which is second only to the 15 collected by the Bucs’ 2003-04 squad … ETSU also reached the Southern Conference Tournament finals, which marked the 12th time the program has played in a conference championship game, and the team also earned a postseason tournament berth for the 14th time with an invite to the inaugural Vegas 16 Tournament … Heading into the 2016-17 season, the Bucs will be losing players such as first-team All-SoCon performer Ge’Lawn Guyn (Lexington, Ky.), 1,000-point club member Lester Wilson (Knoxville), high-flying dunk specialist Deuce Bello (Greensboro, N.C.), and steady point-guard presence Petey McClain (Mobile, Ala.) … Last year, Guyn averaged 18.3 points per game, while Bello and Wilson combined for another 16 points a contest … However, not all of the production from a year ago is gone, as All-SoCon selection T.J. Cromer (Albany, Ga.) returns after averaging 14.9 points and a team high 3.1 assists per game a year ago … In addition, players such as All-SoCon Tournament selection Desonta Bradford (Humboldt), who averaged 7.6 points and 2.9 rebounds a year ago, and veterans like A.J. Merriweather (Jackson) and Isaac Banks (New Orleans, La.) will be back on the court for the Bucs … Post Peter Jurkin (Juba, South Sudan) will also return after a season in which he showed marked improvement throughout and finished averaging 5.3 points and 3.1 rebounds per game … Fans will also get to see two new players on the floor this year that sat out as redshirts a year ago … This duo includes transfers Hanner Mosquera-Perea (Istmina, Colombia) from Indiana and Tevin Glass (Norcross, Ga.) from Wichita State … Perea and Glass are both post players who will quickly add depth and talent in the paint … Along with these eight returning players, the Bucs will also be adding five new recruits to the team, a group that includes a couple of Junior College All-Americans and a great deal of offensive firepower … The class is comprised of guards Devontavius Payne (Carbondale, Ill.), Jason Williams (Detroit), Jermaine Long (New Orleans) and transfer Kanayo Obi-Rapu (Greensboro, N.C.), along with forward David Burrell (Milwaukee).

The series vs. Samford

The Bucs are 7-1 all-time against Samford ... In a series that dates back to 1979, the Bucs won the first four contests before dropping a home game to the Bulldogs during the 2014-15 season ... The Bucs have won the last three meetings between the two programs, including a 96-86 victory in double overtime the last time the two met back on Jan. 25, 2017 in Birmingham, Ala.

Last time out vs. Samford

BIRMINGHAM, Ala. (Jan. 25, 2017) – In one of the classic games in the history of ETSU men’s basketball, the Buccaneers battled through two overtimes to ultimately drop Southern Conference foe Samford 96-86 on the road Wednesday night at the Pete Hanna Center. ... The game – which included 12 ties and 21 lead changes – saw the Bucs make a defensive stop at the end of regulation to force the first overtime, but then look on as Samford’s Christen Cunningham hit a buzzer-beating, game-tying 3-pointer to send the teams to a second extra period. At that point, the Bucs scored 18 points in the final, five-minute OT period – an offensive surge led by 11 points from junior guard Desonta Bradford (Humboldt) and a clutch 3-pointer by senior guard T.J. Cromer (Albany, Ga.) – to take the win. ... Bradford finished with his first-ever double-double thanks to 10 rebounds and a career high 21 points, while Cromer finished with a game high 27. In all, five ETSU players would score in double figures, with junior forward David Burrell (Milwaukee) adding 14, while senior post Tevin Glass (Norcross, Ga.) and senior guard A.J. Merriweather (Jackson) netted 12 and 10, respectively.

JOHNSON CITY, Tenn. (Feb. 11, 2017) – T.J. Cromer (Albany, Ga.) and A.J. Merriweather (Jackson, Tenn.) wasted little time reaching the 1,000-point milestone. ... The Buccaneer senior duo both reached their respective mark in the first four minutes of the contest as ETSU opened on a 22-8 run en route to downing Mercer, 88-71, in front of 5,225 fans on Saturday afternoon inside Freedom Hall. ... Cromer entered the game needing only five points to reach the club, while Merriweather needed six and they combined for 38 points on 14-of-22 shooting. Cromer finished with 28 points and sits 36th all-time with 1,023 career points, while Merriweather is 39th with 1,004 career points. Cromer also added eight rebounds and six assists in 31 minutes. Ironically, it was Cromer’s second assist of the night which resulted in Merriweather’s 1,000th career point as the Jackson, Tenn. native drained his three-pointer at the 16:02 mark, while Cromer’s clinching bucket came one minute earlier.  ... Meanwhile, juniors Devontavius Payne (Carbondale, Ill.) and Desonta Bradford (Humboldt, Tenn.) also scored in double figures. Payne finished with 18 points and Bradford totaled 11 points, seven assists and three rebounds. ... ETSU – who extended its home win streak to five straight games – improved to 20-6, 10-3 in Southern Conference play. The Bucs have now posted back-to-back 20-win seasons in the Steve Forbes era, marking the fourth time in program history ETSU has accomplished the feat in consecutive seasons. The 20-win campaign marks the 12th time the Blue and Gold have reached the mark since the 1988-89 season.

Off and running: Bucs’ start one of the best ever

At 20-6 so far this season, the Bucs are off to the their best start since the 2003-04 ETSU team finished the regular season and tournament with five losses ... That group -- led by the trio of Zakee Wadood (Lonoke, Ark.), Jerald Fields (Gainesville, Fla.) and Tim Smith (Newport News, Va.)  went 15-0 in SoCon play before falling to College of Charleston in the regular season finale ... The 2003-04 Bucs went on to win the SoCon Tournament and gave Cincinnati a scare in the NCAA Tournament, losing to the Bearcats by three and finishing the year at 27-6 overall, one of the best seasons in school history.

During the win over Mercer on Feb. 11, 2017, senior guards A.J. Merriweather (Jackson) and T.J. Cromer (Albany, Ga.) both eclipsed 1,000 points in the same game ... Cromer was first to the milestone with a 3-pointer at the 17:05 mark of the first half, followed by Merriweather  with another 3-pointer at 16:02 on an assist from Cromer ... The two now rank among 40 ETSU players to have reached that 1,000-point threshold ... Their current standing is below:

Entering November’s Sanford Pentagon Showcase, the Bucs led the nation in field goal percentage, shooting a blistering 58.8 percent from the floor three games into the season ... Currently, ETSU ranks 12th nationally at 49.2 percent ... With a 68.3 percent clip in the game against UDM, ETSU came up just half a percentage shy of the program’s single game record ... The 68.3 clip vs. UDM is the seventh highest percentage in a D-I game this year ... The Bucs currently rank in the Top 50 in multiple categories nationally ...  A complete list of the Bucs current position in the national statistics can be found to the left of this note.

With their 20-6 start, the Bucs are currently ranked 13th in the most recent CollegeInsider.com Mid-Major Poll, which was released on Monday ... The Bucs are joined in the ranking by Furman (12th) and Chattanooga (16th).

While ETSU has enjoyed its share of wins over “major” opposition in the past, the Bucs’ have now posted back-to-back seasons with wins over teams from “Power 5” Conferences ... The Bucs dropped Atlantic Coast Conference foe Georgia Tech last season, and followed that victory with a win over Mississippi State earlier this year ... The win over GT  was the firs over an ACC foe since defeating N.C. State back in 1991 ... The MSU win was the first since dropping the same Bulldogs back in 2010.

Depth, bench play coming through in the clutch for Bucs

The depth of the ETSU bench is becoming more apparent with each game this season ... Through the first 26 games of the year, the Bucs’ bench players have outscored their opponents in 18 of those contests ... For instance, in the road win over The Citadel, Jermaine Long (New Orleans) put together season highs for points (11), rebounds (5) and assists (5) in 20 minutes of play. ... Other players like Devontavius Payne (Carbondale, Ill.), who is averaging 7.2 points per game this year, and David Burrell (Milwaukee), who is averaging 8.0 points and 3.7 rebounds a game, have also provided much-needed production ... Jason Williams set career highs for point (9), three-pointers made (3) and minutes played (20) in the win over The Citadel on Feb. 9.

In a Basketball Times’ story by Tony Jimenez earlier this year, ETSU head coach Steve Forbes and his staff are were praised for their recruiting efforts at the junior college level. ... In fact, the Bucs’ 2016-17 recruiting class -- which includes JuCo first team All-Americans -- was ranked No. 2 in the nation behind only Southeastern Conference member Arkansas.