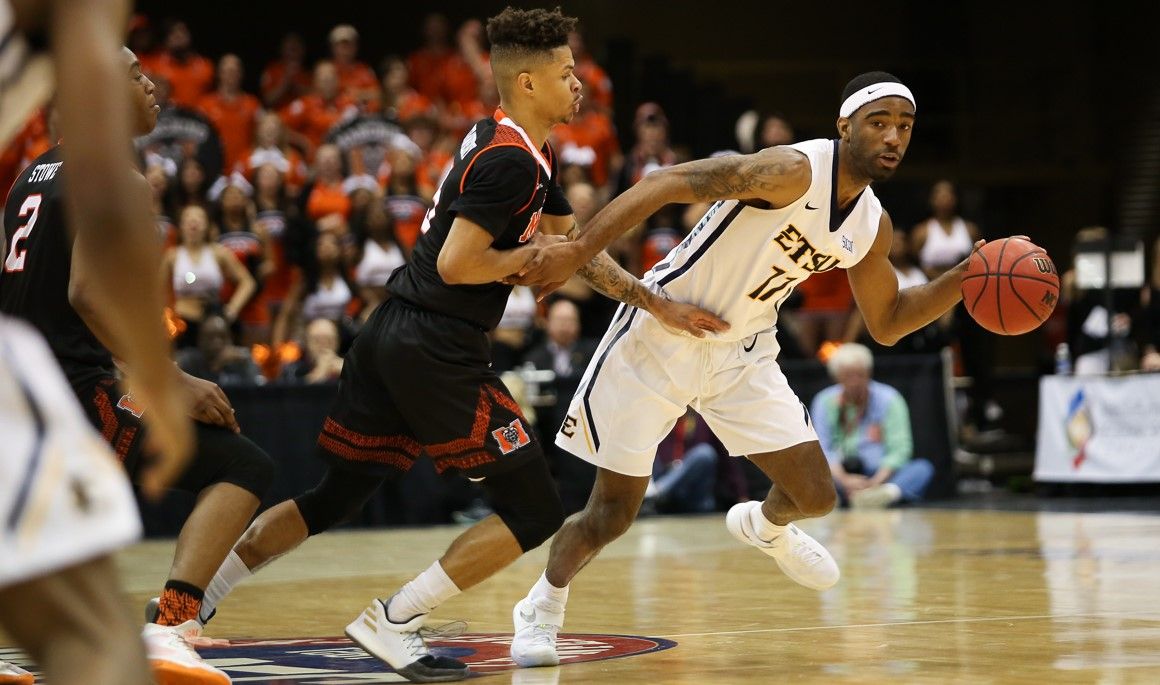 In a contest that was tied midway through the second half, the 6-foot-4 junior guard powered a game-defining offensive run by scoring nine of 11 straight points for the Buccaneers, who raced ahead of the Mercer Bears and ultimately secured a 73-66 victory Saturday evening in the quarterfinals of the Southern Conference Tournament presented by General Shale at the U.S. Cellular Center.

The Bucs, who improved to 25-7 on the year, had trailed by as many as 13 points in the first half, but will now prepare for a 7:30 p.m. matchup with No. 7 seed Samford in the semifinals on Sunday evening. Meanwhile, Mercer – which has now lost six straight games to the Bucs dating back to last season – dropped to 15-17 on the year.

“They hit us with a lightning bolt there in the first half, but we stayed connected and didn’t fracture,” said ETSU head coach Steve Forbes, who improved his SoCon Tournament record to 4-1. “We have strength in numbers. We knew someone would step up and shots would start to fall. That happened in the second half.”

The first half certainly did not start well for the Bucs, as Mercer went strong to the boards and shot a high percentage from 3-point range, hitting six shots from beyond the arc and using a 15-3 offensive run to claim a 13-point lead at 20-7 with 13 minutes left in the half.

Mercer retained its double-digit lead at 33-21 with 4:22 left before the intermission when the ETSU offense finally came to life. Using a 13-2 run to close the half, the Bucs ultimately trailed the Bears 35-34 at the break. The Bucs got a team high 11 points from Glass in the first half, while junior guard Devontavius Payne (Carbondale, Ill.) came off the bench to provide a valuable nine points and three rebounds.

After the break, the game stayed tight for the first part of the second half, as the game remained tied at 45 with 11:50 left. However, Bradford took over at that point, scoring nine of the Bucs next 11 points to power an 11-0 run that gave ETSU a 56-45 lead with 7:41 left in the game. During that stretch, Bradford had a traditional 3-point play and an alley-oop dunk from Cromer that was highlight-reel worthy.

From there, the Bucs maintained a comfortable lead to close out the win. For Mercer, three players reached double figures, led by 18 points from junior guard Demetre Rivers.

For the game, the Bucs ended up out-rebounding the Bears 36-34, blocked 11 shots, outscored the Bears 38-22 in the paint, and had a 21-11 advantage in bench points. Also, the Bucs ultimately outscored Mercer 66-46 after falling behind 20-7 to start the game.

For more on ETSU men’s basketball throughout the 2017 postseason, visit ETSUBucs.com and click on the men’s or women’s hoops links.