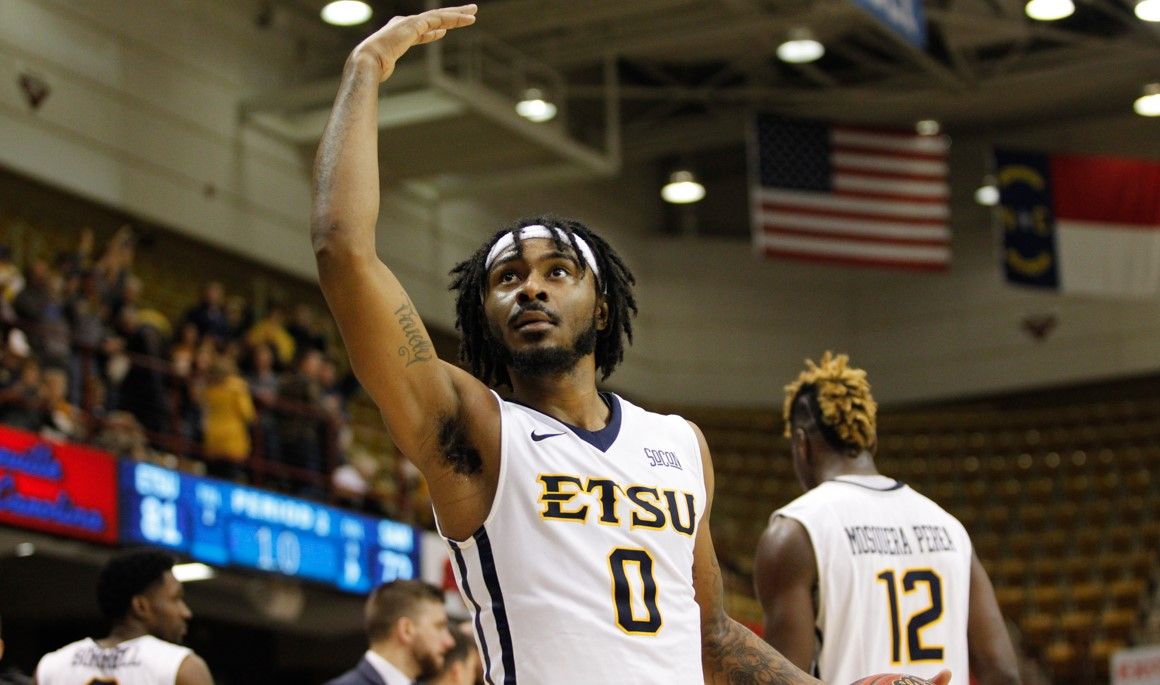 ASHEVILLE, N.C. (March 5, 2017) – The ETSU men’s basketball team has enjoyed its share of outstanding individual performances in the Southern Conference Tournament over the years, but on Sunday night, senior guard T.J. Cromer (Albany, Ga.) had a game for the ages.

Scoring a career high 41 points – 25 of which came in an incredible first half – Cromer became the first player to eclipse 40 points in a Southern Conference Tournament game since NBA star Stephen Curry went for 43 in 2009, as the Buccanners raced past Samford 81-72 in the semifinals of the SoCon Tournament at the U.S. Cellular Center.

With the win, the Bucs improved to 26-7 on the season, but more importantly secured a spot in Monday night’s SoCon title game against UNC Greensboro at 7 p.m. It was announced after the game that the championship tilt has been moved from ESPN2 and will now air on ESPN. Meanwhile, Samford’s season ends with a 19-15 record.

Connecting on 9-of-12 shots from beyond the 3-point arc, Cromer tied the tournament record for threes in a game and came up just one shy of the ETSU single-game mark. He also became the first ETSU player to eclipse 40 points in a game since Tim Smith’s 41 in a win over Georgia Southern back in 2005.

“I thought we came out tonight and really played well, and T.J. had a lot to do with that,” said ETSU head coach Steve Forbes. “He didn’t shoot the ball well last night, but he does so many other things for our team. Tonight, he got us going. Forty-one points is a special night. Sometimes when you play these kind of games, I think you need someone to step up like that, and he did that.

“Give a lot of credit to Samford, they have a really good team. We put them in a hole, and we did not let them fight out of it until right at the end. They did not have anything to lose but to come at us, and they kept playing hard.”

Cromer – who finished 11-of-18 from the field and 10-of-11 at the foul line – was joined in double figures on the night by junior guard Desonta Bradford (Humboldt) with 13. For Samford, three players netted double figures, led by a strong 30-point showing from guard Christen Cunningham.

Cromer’s offensive play and the Bucs’ defensive effort were the story of the first half. Scoring six of ETSU’s first nine points thanks to a pair of 3-pointers, Cromer went on to net his remarkable 25 points in the opening 20 minutes thanks to an 8-of-12 shooting clip from the floor and 6-of-8 showing from 3-point range.

Meanwhile, as Cromer did his damage of the offensive end, the Bucs’ defense blocked four shots and forced eight turnovers by the Bulldogs, while also holding Samford to a 25 percent shooting percentage over the opening 15 minutes of play. The result when the smoke cleared was a 19-point lead for the Bucs at 31-12 with six minutes left in the half.

After the break, another 12-0 run by the Bucs – powered by three straight 3-pointers from Cromer – put the Bucs up 53-30 with 15 minutes left and the game was all but decided. While Samford did rally late with some aggressive defense, the game was never in doubt.

For the game, Samford outscored the Bucs by a whopping 34-14 count in the paint, but the Bucs shot 57 percent from 3-point range and went 13-of-23 as a team from beyond the arc. ETSU also picked up six blocks and 11 steals on the night, holding Samford to a 40.6 percent shooting clip from the field and 30 percent mark from 3-point range.

For more on ETSU men’s basketball throughout the 2017 postseason, visit ETSUBucs.com and click on the men’s hoops link.