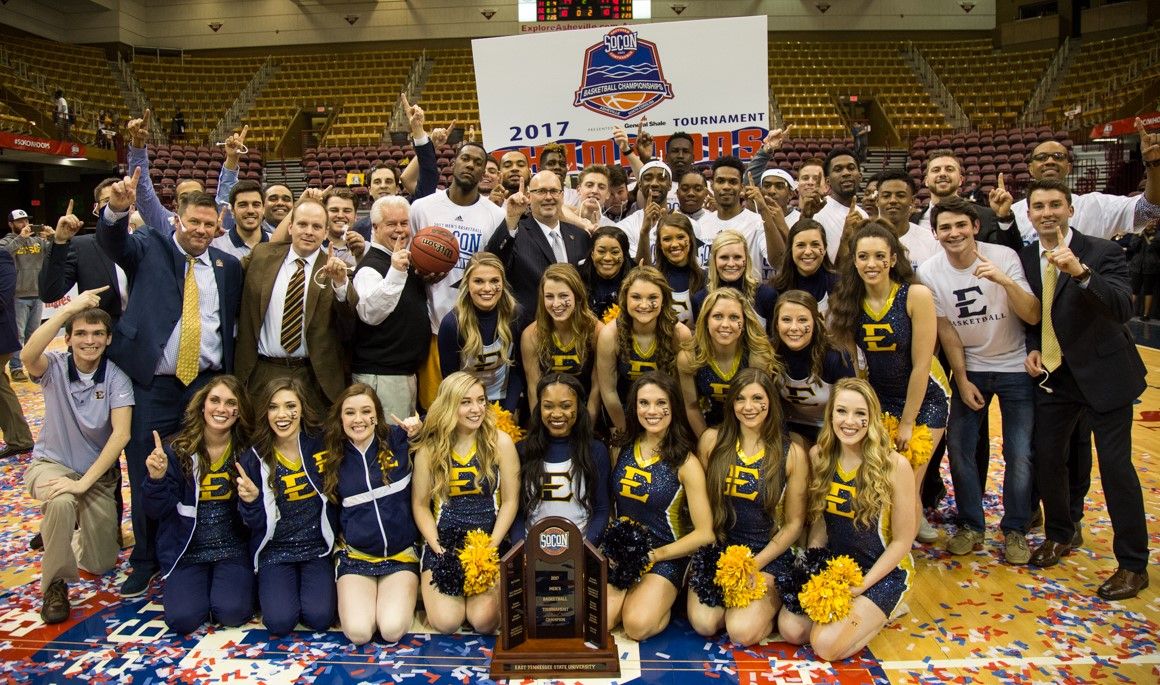 When Steve Forbes was hired as the men’s basketball coach at ETSU on March 31, 2015, he promised that the Bucs would have a program of “first, best and most.” Less than two years later, Forbes made good on that guarantee.

Avenging two losses to UNC Greensboro during the regular season, the ETSU men’s basketball program made history Monday night, dropping the Spartans 79-74 in the championship game of the Southern Conference Tournament and earning the program’s 10th trip all-time to the NCAA Tournament.

In front of a sold out crowd dominated by ETSU fans and before a national television audience on ESPN, the 2016-17 Bucs improved to 27-7 on the season and are now tied for second on the program’s all-time list for wins in a season. Meanwhile, UNCG dropped to 25-9.

Four players scored in double figures for the Bucs, with senior T.J. Cromer (Albany, Ga.) netting a team-high 23 points and going 11-of-11 at the free throw line, while senior A.J. Merriweather (Jackson) added 13 on 5-of-5 shooting. Hanner Mosquera-Pera (Istmina, Colombia) and Tevin Glass (Norcross, Ga.) each finished with 12, while David Burrell (Milwaukee, Wis.) pitched in with five points and tied the single-game tournament record with six blocks. Glass just missed a double-double as he pulled down a game-high nine rebounds.

As a team, ETSU – which outscored the Spartans 48-36 in the second half – shot 53 percent from the field and posted a school record by going 19-of-19 from the charity stripe. Cromer was named the tournament most valuable player, while both he and junior guard Desonta Bradford (Humboldt) were named first-team, all-tournament.

“I’m really happy for our guys, for our staff, our administration and our fans,” said Forbes, who led the Bucs to their seventh SoCon Tournament title in school history. “(Asheville) is Johnson City South. I was just blown away by our fan support. They’ve been unbelievable all year long and they made a big difference in this game. I think we’re 5-1 here now since we’ve been here, so we’ll keep coming back.”

In the first half, the Bucs struggled to stop the UNCG outside shooting attack, as the Spartans went 5-of-12 from outside the arc while the Bucs were shutout with a 0-for-5 clip. While both teams shot an identical 46.2 percent and 12-of-26 from the field, that differential from outside the arc allowed UNCG to lead 38-31 at the intermission. The Bucs had gotten to within two points at 31-29, but the Spartans closed the half on a 7-2 run to help take the seven-point lead at the break.

Before the intermission, ETSU out-rebounded the Spartans 15-13 and held a 16-8 advantage in the paint and off second-chance points. But the Spartans got strong double figure scoring efforts from their big three of Francis Alonso, Diante Baldwin and R.J. White, with Alonso scoring a game high 16 heading to the locker room.

Fortunately for the Bucs, the story of the game changed in the second half. While UNCG led for a majority of the first 26 minutes of the contest, it was 50-48 when Burrell ignited an 18-4 run with a three-pointer with 13:53 to play. Two Jermaine Long (New Orleans) free throws with 7:39 remaining then made it a 12-point lead for the Bucs, 66-54. But it wasn’t over.

It was still a 10-point advantage as the clock ticked with a minute-and-a-half to go. White drained a three from right in front of his bench to provide a spark. Alonso then hit another making it a four-point game, 75-71, with 40 seconds left.

Cromer, who scored 14 of his 23 in the second-half comeback, made two free throws after a quick foul by the Spartans. However, UNCG got off three triples on the ensuing possession with Jordy Kuiper finally making it a three-point game with 12 seconds left.

Baldwin got the steal as the Bucs attempted to in-bound the ball. He found Alonso, whose 3-point attempt was just off the mark. Merriweather sealed it with a strong rebound and two free throws for the 79-74 final margin.

Alonso led all scorers with 28 on the night, followed by White’s 23.

The Bucs now await Selection Sunday, March 12. It is the 10th time in ETSU’s history it’s advanced to the NCAA Tournament, and the first time since 2010.

ETSU: Made all 19 free throws attempt, which set a school record…both teams attempted 19 for the game with UNCG making (15).

ETSU: 7-3 all-time in the championship contest…last SoCon title came in 2004.