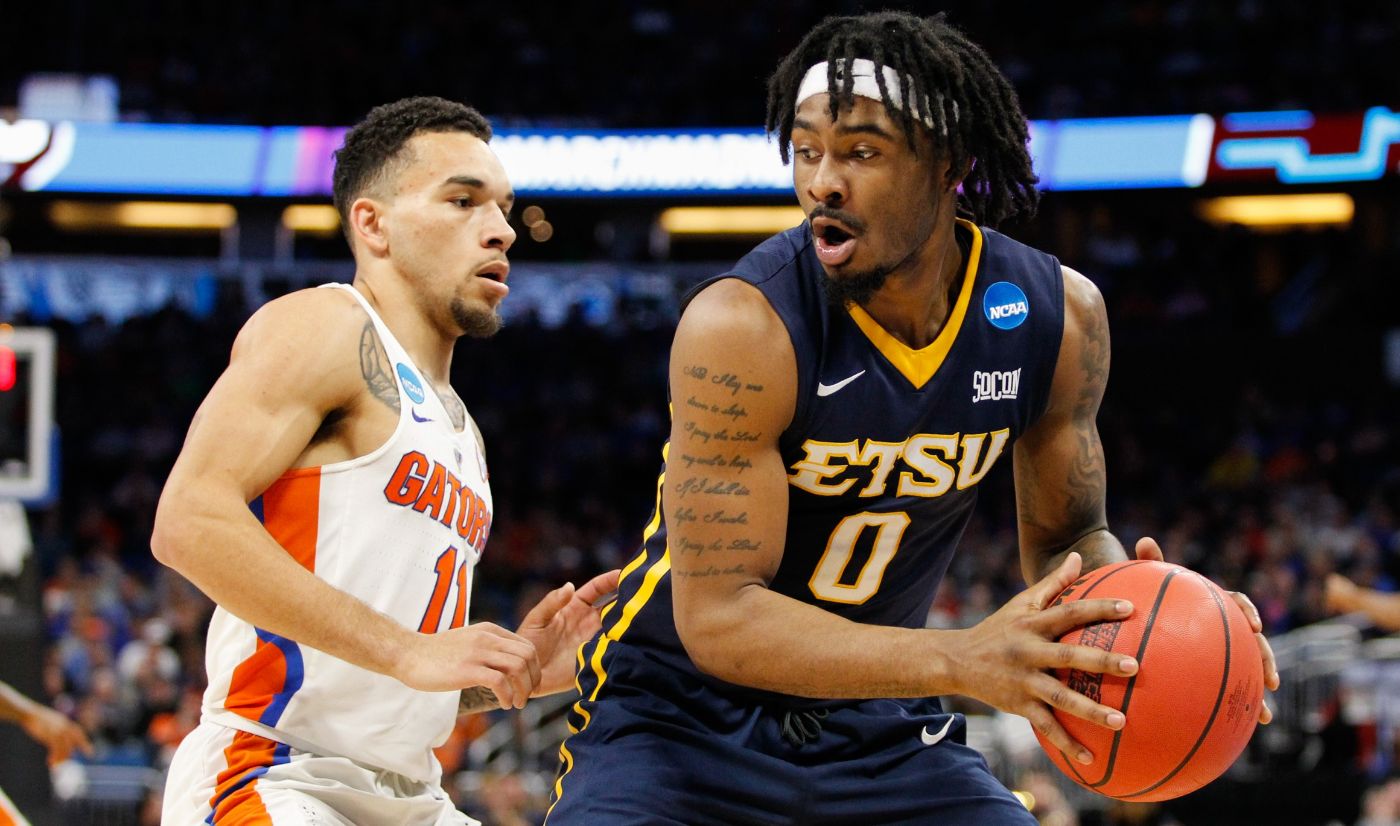 ORLANDO, Fla. (March 16, 2017) – A magical season for the ETSU men’s basketball team came to an end Thursday afternoon in the first round of the NCAA Tournament, as the No. 13-seeded Buccaneers dropped an 80-65 contest to the No. 4-seeded Florida Gators inside the Amway Center.

When a 3-pointer by senior guard T.J. Cromer (Albany, Ga.) on the first play of the second half gave ETSU its first lead of the game at 37-35, the large contingent of Bucs’ fans that traveled to Orlando roared their approval. However, over the next 10 minutes of play, the Bucs would connect on only one field goal and looked on as the Gators pulled away to a 16-point lead and never looked back.

With the loss, the Bucs end their season with a 27-8 record, a mark that features the second highest win total in school history. Meanwhile, the Gators improved to 25-8 and move on to face No. 5 seed Virginia in the second round on Saturday.

“Give credit to Florida, they played well today and deserved it,” said ETSU head coach Steve Forbes, who has guided the Bucs to back-to-back, 20-wins seasons and both the 2017 Southern Conference regular season and tournament championships. “I’m proud of our guys. Today didn’t go as we wanted, but that takes nothing away from the season they put together. This is a special group and they have done so much for our university and our community.”

For the game, Cromer finished his career with a team high 19 points, while junior forward David Burrell (Milwaukee) netted 11. Meanwhile, Florida got a game high 24 points from Devin Robinson, while both Kasey Hill and Chris Chiozza finished with 14 points each.

While the final result was not good for ETSU, the Bucs did stand toe-to-toe with the Gators for the first 25 minutes of play.

In the first half – while the Bucs struggled with some early turnovers – Florida took advantage by cashing in on several transition scores, taking a 14-6 lead five minutes into the game. The Gators’ cushion remained eight midway through the half when the Bucs woke up offensively with a 14-6 run powered by eight straight points from Burrell, which included two 3-pointers, tying the game at 28.

The contest stayed close the remainder of the half, with the Bucs scoring their final bucket of the opening 20 minutes on a layup by Cromer, making it 33-32 in favor of the Gators at the break. Before the intermission, ETSU shot 48 percent from the floor and got a team best 10 points from Cromer. Meanwhile, the Gators were just 1-of-10 from 3-point range, but were 8-of-13 from the free throw line while the Bucs did not take a shot at the charity stripe the entire half.

After the break, the Bucs took their first lead of the game by opening the half with a 3-pointer by Cromer to make it 35-33. Unfortunately for the Bucs, the Gators responded with three straight 3-pointers of their own to manufacture a 9-0 run and retake a 44-37 advantage with 15 minutes left in regulation.

At this point, the decisive stretch of the game doomed ETSU. In all, the Bucs would go from the 17:53 mark of the second half to the 7:40 mark with just one field goal – a 3-pointer by junior guard Jermaine Long (New Orleans) – as the Florida lead only grew, capping out at 59-43. ETSU cut the Gator advantage to 10 at 62-52 and had a chance to get to within single digits following a Florida turnover with four minutes left, but the Bucs were unable to convert on the other end of the floor and the Gators were never threatened again.

For the game, Florida held ETSU to 40 percent shooting and forced 17 turnovers on 12 steals. They also held a sizeable advantage for points off turnovers (20-5) and fast break points (18-2), scoring 47 points in the second half, the highest total relinquished by the ETSU defense all season.

The Bucs will now enter the offseason following one of the most memorable years in program history. For more on ETSU hoops throughout the offseason, visit ETSUBucs.com and click on the men’s hoops link.