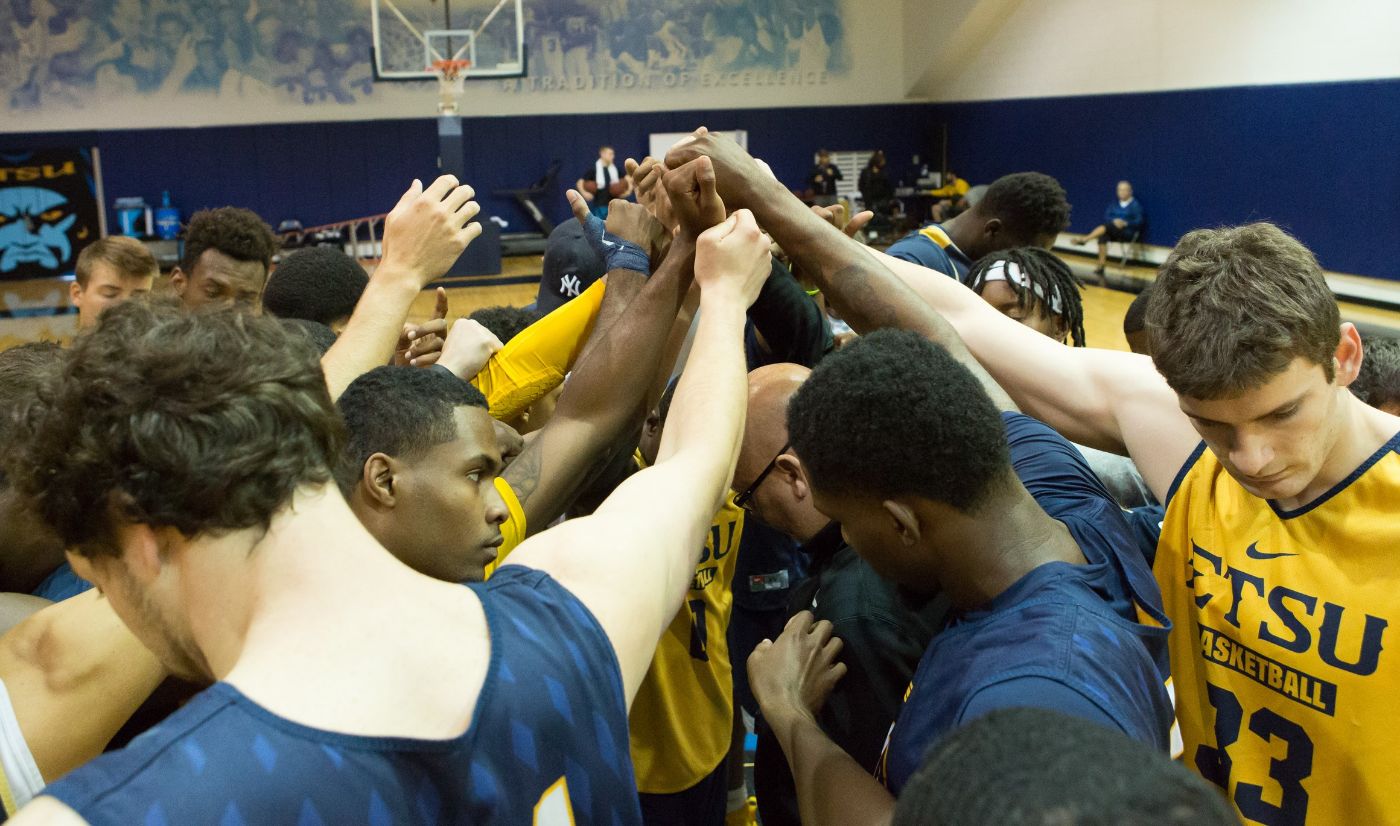 “Everybody in the country has a great first practice,” said Forbes, whose teams have won a conference-best 51 games over the last two years. “The true test of our progress will be a week or two from now. Our seniors showed great leadership and that needs to be consistent the entire year. I liked where we were at today.”

The Bucs will open on Nov. 10 at Northern Kentucky, which is the first of three straight road games to start the season. The team’s home opener will then follow on Nov. 20 against Delaware State inside Freedom Hall.

When Steve Forbes was hired as the men’s basketball coach at ETSU on March 31, 2015, he promised that the Buccaneers would have a program of “first, best and most.”

Less than two years later, Forbes made good on that guarantee as he guided the 2016-17 ETSU men’s basketball team to a 27-win season, both a Southern Conference regular season and tournament title, and a 10th trip all-time to the NCAA Tournament. Overall, the Bucs have combined to win more games than any other program in the SoCon over the last two years and have made back-to-back appearances in the league’s tournament championship game. As the squad enters the 2017-18 season, the momentum and excitement around the program are high, but there will be challenges.

Graduating four of its starting five players from a year ago, the Bucs have lost 62 percent of its offensive production from a year ago, along with its two best interior post defenders. Gone are SoCon Tournament MVP and leading scorer T.J. Cromer (Albany, Ga.), along with fellow graduates A.J. Merriweather (Jackson), Hanner Mosquera-Perea (Istmina, Colombia), Tevin Glass (Norcross, Ga.) and Isaac Banks (New Orleans). However, as they have in the past two years, Forbes’ staff continues to recruit well and has landed what appears to be another talented class of incoming players.

Heading into the 2017-18, senior point guard Desonta Bradford (Humboldt) will be the one returning starter from a year ago that is expected to raise his level of play after averaging 10.4 points, 4.4 rebounds and 3.9 assists per game a year ago and being named first team All-SoCon Tournament. Along with Bradford, returning perimeters players such as senior guards Jermaine Long (New Orleans) and Devontavius Payne (Carbondale, Ill.), as well as sophomore Jason Williams (Detroit) and transfer Kanayo Obi-Rapu (Greensboro, N.C.) will be called upon to provide more production, as well as newcomers such as fifth year transfer Jalan McCloud (Fort Worth, Texas) and true freshman Bo Hodges (Nashville).

On the inside, the only returning player with significant minutes from a year ago will be junior forward David Burrell (Milwaukee), who averaged 7.5 points and 3.2 rebounds a year ago, while shooting 41 percent from 3-point range. The new cast of Bucs to help Burrell on the inside will include highly acclaimed junior college transfer Jeromy Rodriguez (Santiago, Dominican Republic), along with fellow transfer James Harrison (Dallas, Texas), true freshman Mladen Armus (Belgrade, Serbia), and fan favorite senior Peter Jurkin (Juba, South Sudan), who was granted a sixth year of eligibility by the NCAA. The Bucs roster also includes three other players, including senior guard Dillon Reppart (Johnson City), senior center Karl Overstreet (Lynchburg, Va.) and freshman forward Kendrick Gray (Newport, Vt.).

The Bucs will open their season with three straight road games beginning with Northern Kentucky on Nov. 10th. Trips to Kentucky (Nov. 17) and Xavier (Dec. 16) will follow, as well as a seven-game non-conference home schedule. The team will then open SoCon play with another three-straight road games before its home conference opener on Jan. 11 versus UNCG ... ETSU’s main home league games will also include visits from rival Chattanooga (Feb. 3), as well as Mercer (Jan. 24), Samford (Feb. 1), Wofford (Feb. 23) and Furman (Feb. 25).