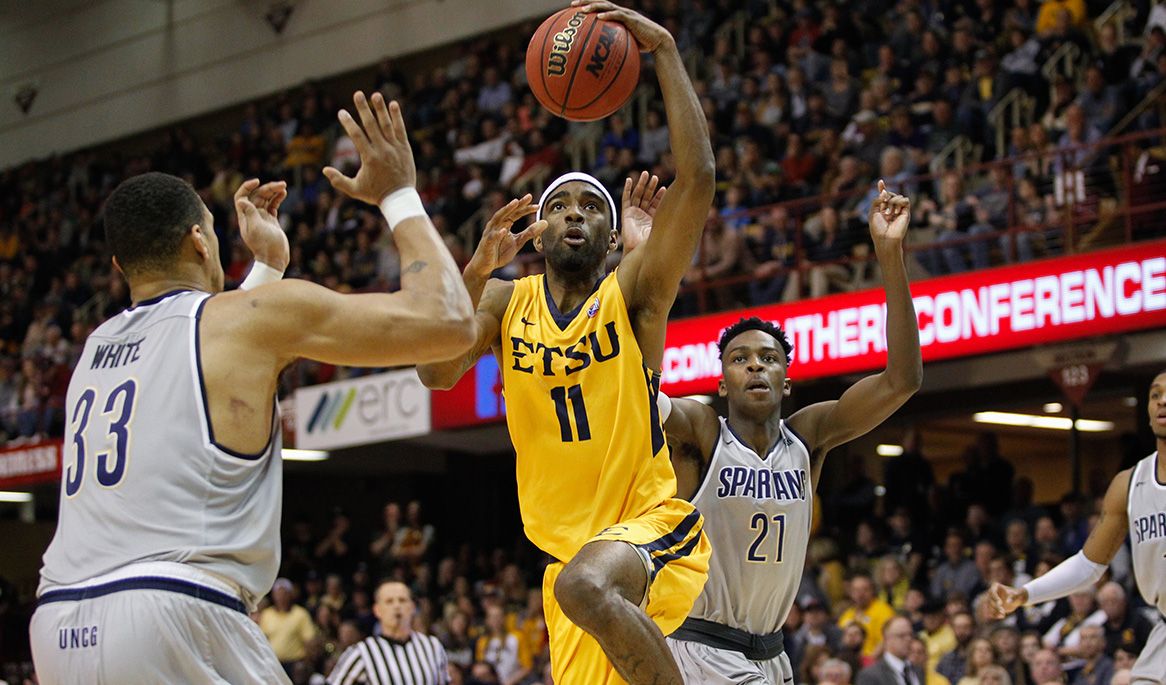 SPARTANBURG, S.C. (Oct. 25, 2017) – ETSU senior guard Desonta Bradford (Humboldt) was selected to the Preseason All-Southern Conference team by the league’s coaches, and the Buccaneers were picked to finish fourth in both the coaches and media polls released by the SoCon offices on Wednesday.

Mercer was the narrow favorite to win the Southern Conference in preseason polling of the league’s 10 men’s basketball coaches, while Furman senior guard Devin Sibley was the coaches’ pick for preseason player of the year. The league’s media predicted Furman to win the SoCon in 2017-18.

Sibley, the reigning SoCon Player of the Year, averaged 17.7 points per game in helping the Paladins to a share of the league’s regular-season title last year. The coaches, who also picked a 10-member preseason all-conference team, were not allowed to vote for their own teams or student-athletes as part of the balloting.

ETSU, the reigning SoCon tournament champion, was selected fourth in both polls, finishing one point behind Furman in the coaches poll with 64 points and two first-place votes, and garnering 178 points and four first-place votes in the media poll. The Bucs, who earned a share of last year’s regular-season title at 27-8 overall and 14-4 in the league, put Bradford, their lone returning starter from last year’s squad, on the preseason all-conference team.

Mercer picked up four first-place votes and 71 total points in the coaches’ poll to edge Samford, which garnered three first-place votes and 70 points. The Bears, who went 15-17 overall and 9-9 in the SoCon in 2016-17, return all five starters from last year, including preseason all-conference selection Ria’n Holland, a senior guard. Mercer was slotted sixth in the media poll with 154 points and two first-place votes.

Furman went 23-12 overall and 14-4 in league play last season and reached the semifinals of the CollegeInsider.com Postseason Tournament. The Paladins, who return four starters and are under the direction of first-year coach Bob Richey, earned 197 points and eight first-place votes in the media poll and were slotted third in the coaches’ poll, picking up 65 points and one first-place vote. Sibley is joined on the preseason all-conference team by teammate and fellow senior guard Daniel Fowler.

Samford went 20-16 last season, posting its first winning season since 2005-06 and claiming its first-ever postseason win with a 78-74 victory over Canisius in the CollegeInsider.com Postseason Tournament. The Bulldogs return all five starters this season and put senior forward Demetrius Denzel-Dyson and junior center Wyatt Walker on the preseason all-conference team. The Bulldogs were second in both polls, picking up 184 points and four first-place votes in the media poll.

UNCG was slotted third in the media poll (183 points, four first-place votes) and fifth in the coaches’ poll (52 points). The Spartans won a program-record 25 games last year, going 25-10 overall and 14-4 in the league to claim a share of the SoCon title. UNCG reached the title game of the conference tournament and earned the league’s automatic bid to the NIT. Junior guard Francis Alonso earned a spot on the preseason all-conference team.

The 2018 SoCon Men’s Basketball Championship presented by General Shale will be held March 2-5 at the U.S. Cellular Center in Asheville, North Carolina.

Preston Parks, So., G, The Citadel