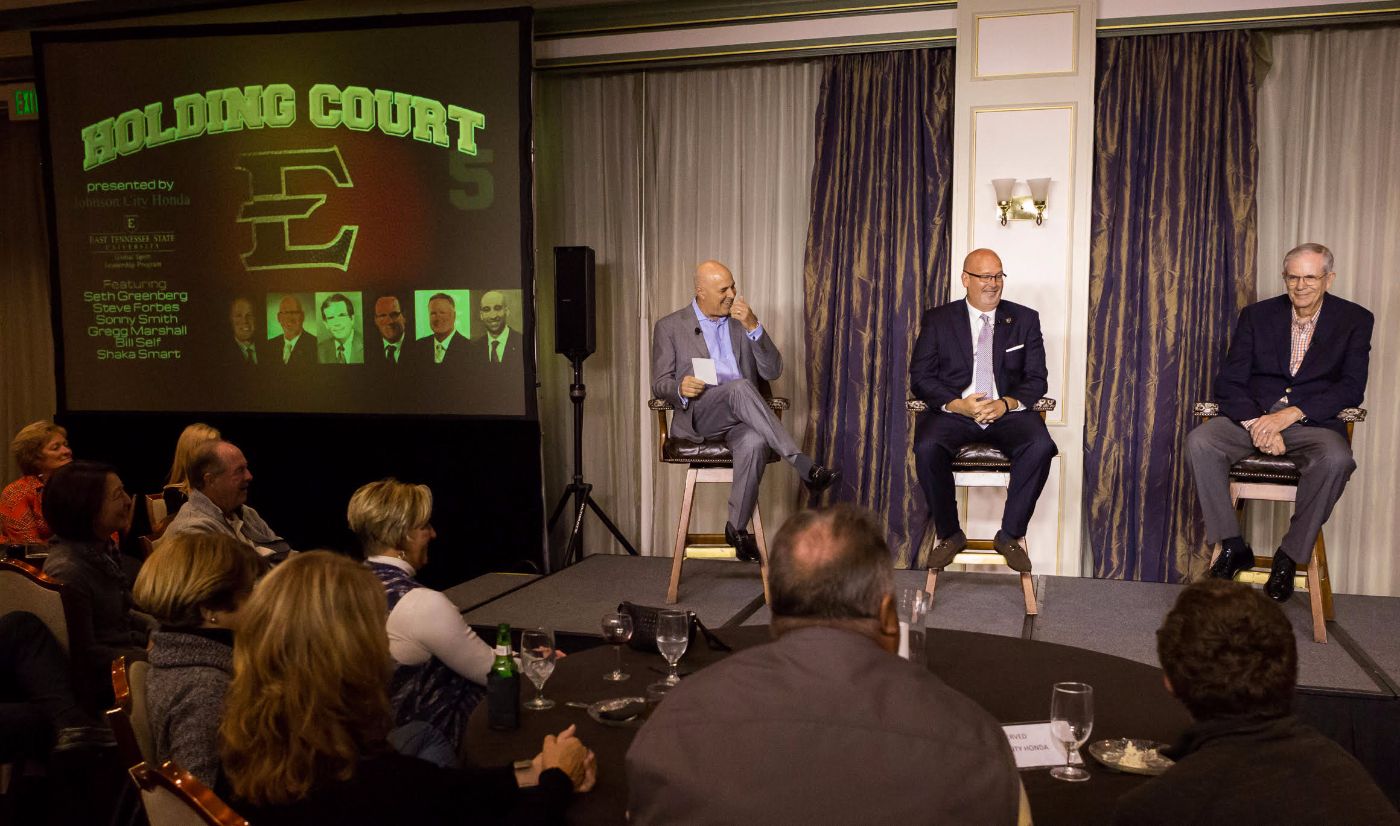 The gathering, which was presented by Johnson City Honda, also featured head coach Steve Forbes and former head coach Sonny Smith. In addition, current head coaches such as Wichita State’s Gregg Marshall, Kansas head coach Bill Self and head coach Shaka Smith from the University of Texas, all joined in on the discussion via live video conferencing from their respective campuses.

Scott Carter, the Director of ETSU Athletics, is really excited about this time of year and it being so close to basketball season.

“This was a pretty special night. You can just really feel all those connections with all those great coaches. It's great to see them all supporting one another and the friendships that they have. When they’re on the court, they want to beat one another if they’re playing each other. A room full of our fans, there was nowhere else they’d want to be on a Monday night this close to the season. I’m very thankful to be a part of this and there's a lot of people to thank and we’re very fortunate for all of them.

Carter will begin his first season with the ETSU basketball program as the Athletic Director. He shares his outlook on the season and is looking forward to the continuous support from Buccaneer fans.

“We’re extremely proud of our coaching staff. The young men that they assemble is fantastic. If you can’t get excited about that, just come to a game and before you leave, you will be excited. It’s a very passionate team that gives everything they’ve got. I think if our fans continue to show up and make Freedom Hall a very formidable home court, they are going to see a wonderful team and we’re going to chase after another conference championship.”

Longtime Buccaneer basketball fans enjoyed the kick-off to the upcoming season and the in-depth talk about basketball.

“It was very entertaining and very informative, especially all the stories about Sonny Smith,” said Buccaneer fan Tony Cavender. “I thought Seth Greenberg was a great emcee and I’m really excited and pumped up for Buc basketball.”

“It was a lot of fun. Seth (Greenberg) did a great job. Sonny is always hilarious. Coach Forbes always does a great job,” said fan and Professor in the Department of Biomedical Sciences, Russ Brown. “The FaceTime with all the coaches was great and it was really nice to hear from Coach Greg Marshall from Wichita State. He was very complimentary of Coach Forbes and I feel like we’re in good shape," concluded Brown.

The event was also sponsored by the Carnegie Hotel, One Stop Wine and Spirits, and Cates Music Center.

For more on ETSU basketball throughout the 2017-18 season, visit ETSUBucs.com and click on the men’s basketball page.