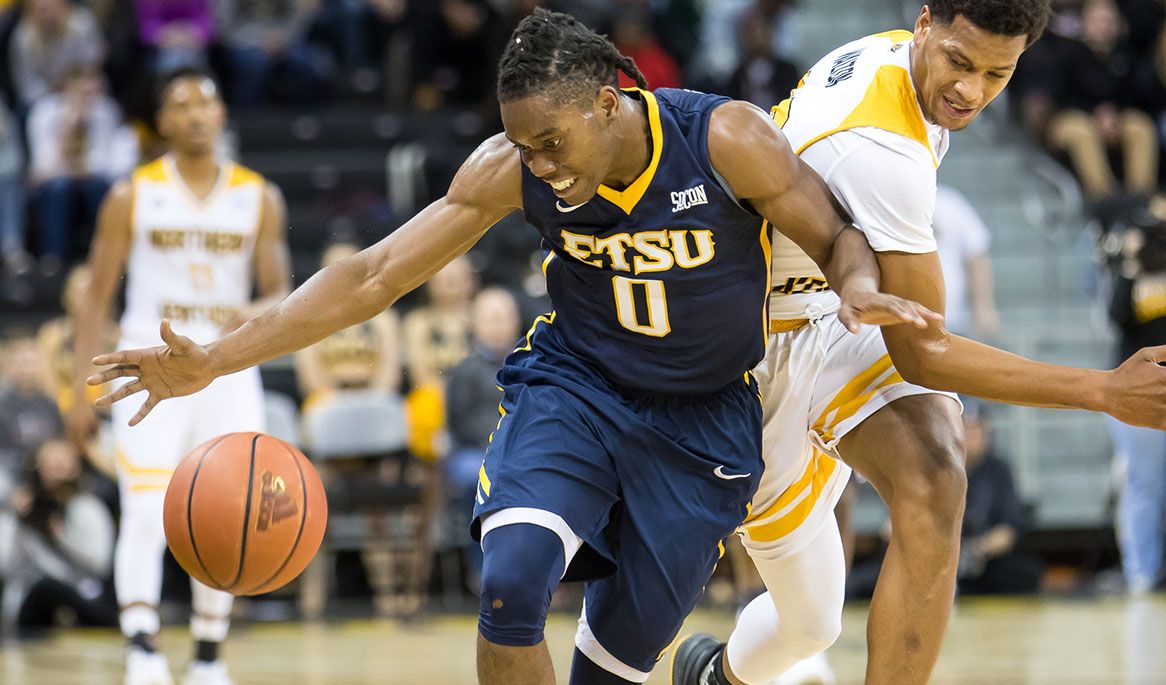 HIGHLAND HEIGHTS, Ky. (Nov. 10, 2017) – In a season-opening contest between two NCAA Tournament teams from a year ago, the squad replacing four starters looked the part against a team that returned the majority of its weapons.

With its starting lineup from a year ago still intact and featuring preseason Horizon League Player of the Year Drew McDonald, who scored a game high 22 points, the Northern Kentucky men’s basketball team put together a more fluid and complete effort to cruise past ETSU 81-63 Friday night at BB&T Arena.

Dropping to 0-1 on the year, the Buccaneers – the defending Southern Conference champions – will look to regroup as they prepare for their second straight road game Monday night at Savannah State. Meanwhile, NKU – the defending Horizon League champions – improved to 1-0. These same two teams will meet again later this year on Dec. 6 at Freedom Hall in Johnson City.

“We knew this would be a tough game and if we played well we could beat them, but we didn’t play well,” said ETSU head coach Steve Forbes. “We had a chance late in the first half to tie the game but we had two turnovers instead, and they went into half with momentum and up nine. In the second half, just too many turnovers. You can’t play that way against a good team like this.”

The stats certainly told the story on this night, as the Bucs committed 20 turnovers and managed only three assists. ETSU was also just 2-of-18 from 3-point range, as senior David Burrell (Milwaukee) was held to only two points and two rebounds, and ETSU’s starting lineup combined to go just 10-of-29 from the field. Meanwhile, NKU dished out 17 assists and committed just 14 turnovers, with McDonald joined in double figures by Lavone Holland and Carson Williams with 16 and 15 points, respectively.

In the first half, early foul trouble sent ETSU players like starters Jermaine Long (New Orleans) and Burrell to the bench early in the game, and put the Norse in the bonus with 13 minutes left in the half. Northern Kentucky took advantage of those numbers to put together a 9-0 run midway through the half and another 13-4 burst just before halftime to take a 41-32 advantage into the break.

For NKU, Drew McDonald led the way with 12 points in the first half, which included a pair of 3-pointers that powered a stretch of four straight makes from beyond the arc. McCloud posted a team high 11 points and two assists for ETSU in the opening 20 minutes, but unfortunately for Bucs, those two assists were the only two assists for the team in the first half to go along with 10 turnovers.

The second half got off to a nightmarish start for the Bucs, who looked on as the Norse manufactured a 14-2 offensive run to take a 55-34 lead with 15:43 left in the game. ETSU never recovered from that surge and could get no closer than 18 the rest of the way.

The Bucs did out-rebound the Norse 43-40 and held NKU to 40.9 percent shooting from the floor, but the Bucs shot just 11.1 percent from 3-point range themselves and watched the Norse outscore them 34-30 in the paint and 27-13 off turnovers.

The Bucs will remain on the road for their next two games, with a trip to Savannah State coming up Monday in Savannah, Ga., followed by a visit to perennial national power Kentucky on Friday, Nov. 17. For more on ETSU men’s basketball throughout the 2017-18 season, visit ETSUBucs.com and click on the men’s hoops link.