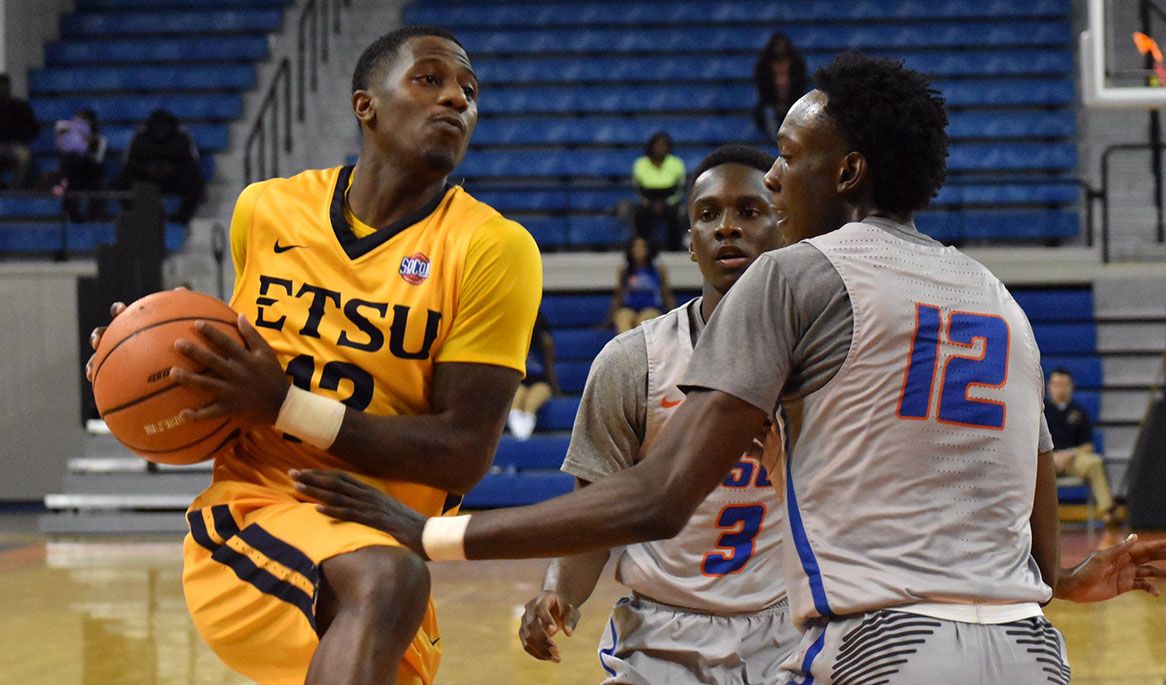 With the win, the Bucs improved to 1-1 on the year, while Savannah State dropped to 0-2 on the season. ETSU will now return to Johnson City and begin preparations for a matchup with Kentucky this Friday at 7 p.m. inside Rupp Arena.

“This was just the opposite of our Northern Kentucky game because this time instead of being down eight at halftime we were up eight,” said ETSU head coach Steve Forbes, referring to the Bucs’ season opener last Friday night. “Coming out at the beginning of the second half we got a similar shot to the one we had at NKU. This time we got it for Devontavius Payne and he hit it. The end of the first half and the start of the second half were really the tale of the tape.”

Along with Payne, sophomore guard Jason Williams (Detroit) also had a breakout performance, posting career bests with five 3-pointers and 15 points on the night. Meanwhile, senior forward David Burrell (Milwaukee) had a career high 12 rebounds, and senior guard Desonta Bradford (Humboldt) had his second career double-double with 10 points and 10 rebounds.

Playing a team that prides itself on what it calls “Tiger Tempo” with multiple 3-pointers attempted each game, the Bucs held Savannah State to a 7-of-33 clip (21.2 percent) from beyond the arc, while shooting 11-of-35 (31.4 percent) from 3-point range themselves.

The first half did not start well for the Bucs, as the Tigers opened the game with three straight 3-pointers to take an early 9-0 lead and force a timeout from Forbes. While the Bucs slowly chipped away at the Savannah State advantage, the Tigers still held a 27-23 lead with 5:58 left in the first half.

At that point, a dunk by Burrell launched an offensive run for the Bucs that ended with a 3-pointer from Williams as the first half clock expired. In all, ETSU would close the half on a 16-4 run to take a 39-31 lead into the locker room. The Bucs led despite committing 11 turnovers and shooting just 21 percent from 3-point range (4-for-19) in the first half.

After the break, Payne took over the game for a five-minute stretch, scoring 10 points during an 11-0 run to open the second half. In all, Payne would score 17 points during a 27-4 ETSU run that spanned both halves and ended with the Bucs leading 50-31 with 16 minutes left in the contest.

Remarkably, at one point early in the game the Bucs were 4-of-33 from 3-point range on the season, having gone 2-of-18 at NKU and following that with a 2-for-15 effort in Monday’s game. However, the Bucs shot 9-of-20 from beyond the arc the rest of the night to surge past the Tigers.

For Savannah State, Austin Dasent had a team high 12 points, while Dexter McClanahan added 10. The Bucs out-rebounded the Tigers 44-40, but both teams committed 20 turnovers. ETSU also held the Tigers to just 31 percent shooting from the floor.

The Bucs will get a three-day break before hitting the road for the final game of their three-game, season-opening road stretch, as the team travels to Lexington, Ky., to take on perennial Southeastern Conference and national power Kentucky inside Rupp Arena. Tip Friday night is set for 7 p.m. and the game will air on ESPN’s SEC Network.