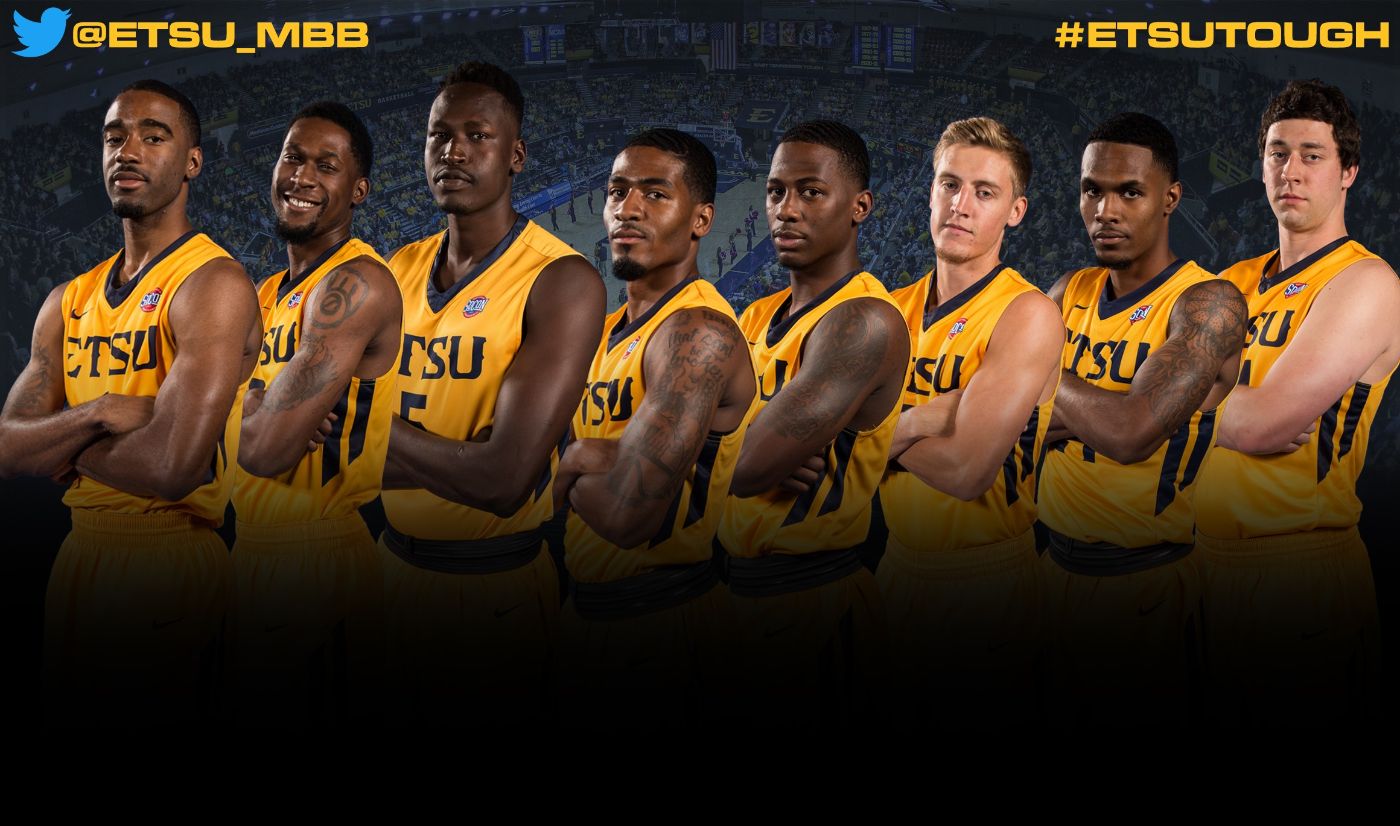 The ETSU men's basketball team will be facing Kentucky for the fifth time in program history.
Bucs set to face No. 7 Kentucky Friday night inside Rupp
ETSU at Kentucky | November 17, 2017
Related Links

LEXINGTON, Ky. (Nov. 16, 2017) – The ETSU men’s basketball team will end its season-opening, three-game road trip with its toughest challenge of the season so far, as the Buccaneers travel to face No. 7 Kentucky Friday night inside historic Rupp Arena. Tip is set for 7 p.m. and the game will air on the SEC Network.

The Buccaneer Sports Network will also have the live broadcast of the game on its radio affiliates and through the live link at ETSUBucs.com. In addition, live stats will also be available by clicking the link to the right of this story.

The Bucs, who captured the 2016-17 Southern Conference title a year ago and made the program’s 10th trip all time to the NCAA Tournament, will face a Kentucky team that once again features some of the nation’s top young talent. The Wildcats (2-1) are coming off a tough loss to fellow power Kansas in the Champions Classic Tuesday night in Chicago, while the Bucs (1-1) picked up their first win of the year on the road Monday night at Savannah State.

When Steve Forbes was hired as the men’s basketball coach at ETSU on March 31, 2015, he promised that the Buccaneers would have a program of “first, best and most.” ... Less than two years later, Forbes made good on that guarantee as he guided the 2016-17 ETSU men’s basketball team to a 27-win season, both a Southern Conference regular season and tournament title, and a 10th trip all-time to the NCAA Tournament  ...  Overall, the Bucs have combined to win more games than any other program in the SoCon over the last two years (51) and have made back-to-back appearances in the league’s tournament championship game ... As the squad enters the 2017-18 season, the momentum and excitement around the program are high, but there will be challenges. ...

The series vs. Kentucky

Last time out against Kentucky

LEXINGTON, Ky. (Nov. 12, 2010) -- ETSU junior forward Isiah Brown (Miami, Fla.) scored a career high 25 points and picked up a double-double thanks to 14 rebounds, but the Kentucky Wildcats hit 12 3-pointers on the night and out-rebounded the Buccaneers 51-33 en route to an 88-65 victory during the regular season opener for both teams inside a sold out Rupp Arena. ... The Buccaneers, who pulled to within 10 points early in the second half, were done in by Kentucky’s response -- a 15-0 run that featured 10 straight points from Kentucky forward Terrence Jones. The freshman from Portland, Ore., finished with a game-high 25 points and the Wildcats never looked back. ... Kentucky finished the game shooting 48.5 percent from the field, but an even more impressive 50 percent from the 3-point line (13-of-26). Meanwhile, the Bucs had no answers in the paint as Kentucky had 19 offensive boards compared to just seven for ETSU. ... The Bucs also got double-figure scoring from senior Mike Smith (Vandalia, Mo.) with 15 points, while sophomore guard Sheldon Cooley (Tampa) had 13. For Kentucky, the freshman trio of Jones, Brandon Knight and Doron Lamb led the way. Lamb finished with 20 points, while Knight added 17 and junior guard DeAndre Liggins had 14. ... The Wildcats’ 3-point shooting and offensive rebounding was the story in the first half. Even though the Bucs shot an impressive 50 percent from the field and put up a respectable 35 points before the break, the Wildcats answered those efforts with a 10-of-17 (59 percent) clip from 3-point range and had 10 offensive rebounds compared to just one for the Bucs. ... Brown’s efforts powered the Bucs throughout the first half, as he scored a team-high 17 that included a layup with 14:57 left on the clock that gave ETSU a brief 9-8 advantage. However, over the next five minutes the Wildcats hit five 3-pointers to outscore the Bucs 23-10 and lead 31-19.

SAVANNAH, Ga. (Nov. 13, 2017) – Devontavius Payne (Cardondale, Ill.) picked a great time to have his best game in an ETSU uniform. ... The senior guard hit a career best six 3-pointers and scored a career high  28 points, powering a game deciding 27-4 offensive run midway through the contest to lift the Buccaneers past Savannah State 76-61 in non-conference basketball action Monday night at Tiger Arena. ... With the win, the Bucs improved to 1-1 on the year, while Savannah State dropped to 0-2 on the season. ETSU will now return to Johnson City and begin preparations for a matchup with Kentucky this Friday at 7 p.m. inside Rupp Arena. ... Along with Payne, sophomore guard Jason Williams (Detroit) also had a breakout performance, posting career bests with five 3-pointers and 15 points on the night. Meanwhile, senior forward David Burrell (Milwaukee) had a career high 12 rebounds, and senior guard Desonta Bradford (Humboldt) had his second career double-double with 10 points and 10 rebounds. ... Playing a team that prides itself on what it calls “Tiger Tempo” with multiple 3-pointers attempted each game, the Bucs held Savannah State to a 7-of-33 clip (21.2 percent) from beyond the arc, while shooting 11-of-35 (31.4 percent) from 3-point range themselves. ... The first half did not start well for the Bucs, as the Tigers opened the game with three straight 3-pointers to take an early 9-0 lead and force a timeout from Forbes. While the Bucs slowly chipped away at the Savannah State advantage, the Tigers still held a 27-23 lead with 5:58 left in the first half. ... At that point, a dunk by Burrell launched an offensive run for the Bucs that ended with a 3-pointer from Williams as the first half clock expired. In all, ETSU would close the half on a 16-4 run to take a 39-31 lead into the locker room. ... After the break, Payne took over the game for a five-minute stretch, scoring 10 points during an 11-0 run to open the second half. In all, Payne would score 17 points during a 27-4 ETSU run that spanned both halves and ended with the Bucs leading 50-31 with 16 minutes left in the contest. ... Remarkably, at one point early in the game the Bucs were 4-of-33 from 3-point range on the season, having gone 2-of-18 at NKU and following that with a 2-for-15 effort in Monday’s game. However, the Bucs shot 9-of-20 from beyond the arc the rest of the night to surge past the Tigers.

ETSU’s own version of “one-and-done”

While Power 5 programs such as Kentucky and Duke have defined the term “one-and-done” to describe freshmen that play a single season before moving on to the NBA, ETSU has created its own version of “one-and-done” which  relies on fifth-year graduate players and other transfers to help give ETSU a jolt of competitive talent. ... In 2015-16, Cincinnati transfer Ge’Lawn Guyn (Lexington, Ky.) was one of these players for the Bucs, while last year Indiana transfer Hanner Mosquera-Perea (Istmina, Colombia) and Wichita State transfer Tevin Glass (Norcross, Ga.) provided ETSU with a single-season boost of talent during the 2016-17 campaign. ... This year, guard Jalan McCloud (Forth Worth, Texas) is carrying on the tradition after transfering into ETSU from Texas Western Southern.

ETSU head coach Steve Forbes will reach a milestone on Friday night, coaching his 300th game as a head coach ... Overall, Forbes is 218-81 (.729) as a head coach at both the junior college and NCAA Division I levels ... His complete coaching record can be found on Page 5 of this notes packet.

ETSU senior guard Desonta Bradford (Humboldt) was selected to the Preseason All-Southern Conference team by the league’s coaches, and the Buccaneers were picked to finish fourth in both the coaches and media polls released by the SoCon offices earlier this year. ... ETSU, the reigning SoCon tournament champion, was selected fourth in both polls, finishing one point behind Furman in the coaches poll with 64 points and two first-place votes, and garnering 178 points and four first-place votes in the media poll. The Bucs, who earned a share of last year’s regular-season title at 27-8 overall and 14-4 in the league, put Bradford, their lone returning starter from last year’s squad, on the preseason all-conference team.

Despite the loss in the season opener at Northern Kentucky, newcomers Jalan McCloud (Fort Worth, Texas), Mladen Armus (Belgrade, Serbia) and

Along with making program history thanks to a 10th trip all-time to the NCAAs and another conference title, last year’s ETSU team also ranked among the best teams ever in multiple single season statistical categories. They included:

While ETSU has enjoyed its share of wins over “major” opposition in the past, the Bucs’ have posted back-to-back seasons with wins over teams from “Power 5” Conferences ... The Bucs dropped Atlantic Coast Conference foe Georgia Tech in 2015-16, and followed that victory with a win over Mississippi State in 2016-17 ... The win over GT was the first over an ACC foe since defeating N.C. State back in 1991 ... The MSU win was the first over an SEC foe since dropping the same Bulldogs back in 2010.

The ETSU men’s basketball team continues to reap good news from its historic 2016-17 season, learning earlier this year that the program posted the nation’s 15th best increase for average attendance from the previous year. ... The Bucs, who averaged 3,065 fans a game in 2015-16, watched as that number ballooned to 4,053 fans per game during the team’s championship run to the NCAA Tournament in 2016-17. ETSU ultimately led the Southern Conference in average attendance per game – selling out three games during the season versus Tennessee, Chattanooga and Furman – and was just outside of the Top 100 in overall attendance in the country out of 347 Division I teams.

As the Bucs open the season with a three game road swing, it won’t be the last time ETSU faces that challenge this year. ... In fact, the Bucs will open SoCon play with three straight road games, and then end the season with three more league games away from home.

ETSU men’s basketball head coach Steve Forbes announced prior to the start of the regular season that junior forward Jeromy Rodriguez (Santiago, D.R.) will undergo a medical procedure and will miss the 2017-18 season. ... “This course of action is what’s best for Jeromy now and in the future,” Forbes said. “We will miss not having him on the court this year, but look forward to him joining us back on the court next season.” ... Rodriguez will still have two years of eligibility remaining when he returns to the roster in 2018-19.

ETSU head men’s basketball coach Steve Forbes was named to USA Today’s list of 10 coaches on the rise heading into the 2016-17 season. Below is an excerpt from the story by Jon Rothstein and a link to the entire list: Which coaches are on the rise in college basketball? Check out our list below as we look at 10 coaches in the sport trending upwards. In no particular order … Steve Forbes, East Tennessee State: Forbes won 24 games in his first season as a head coach in Division I and should be a perennial contender in the SoCon. A tenacious recruiter when he was an assistant at both Tennessee and Wichita State, Forbes knows how to find players. The Bucs currently have three players on their roster — Peter Jurkin (Indiana), Hanner Mosquera-Perea (Indiana), and Tevin Glass (Wichita State) that were all recruited to play at a significantly higher level before Forbes lured them to East Tennessee State.