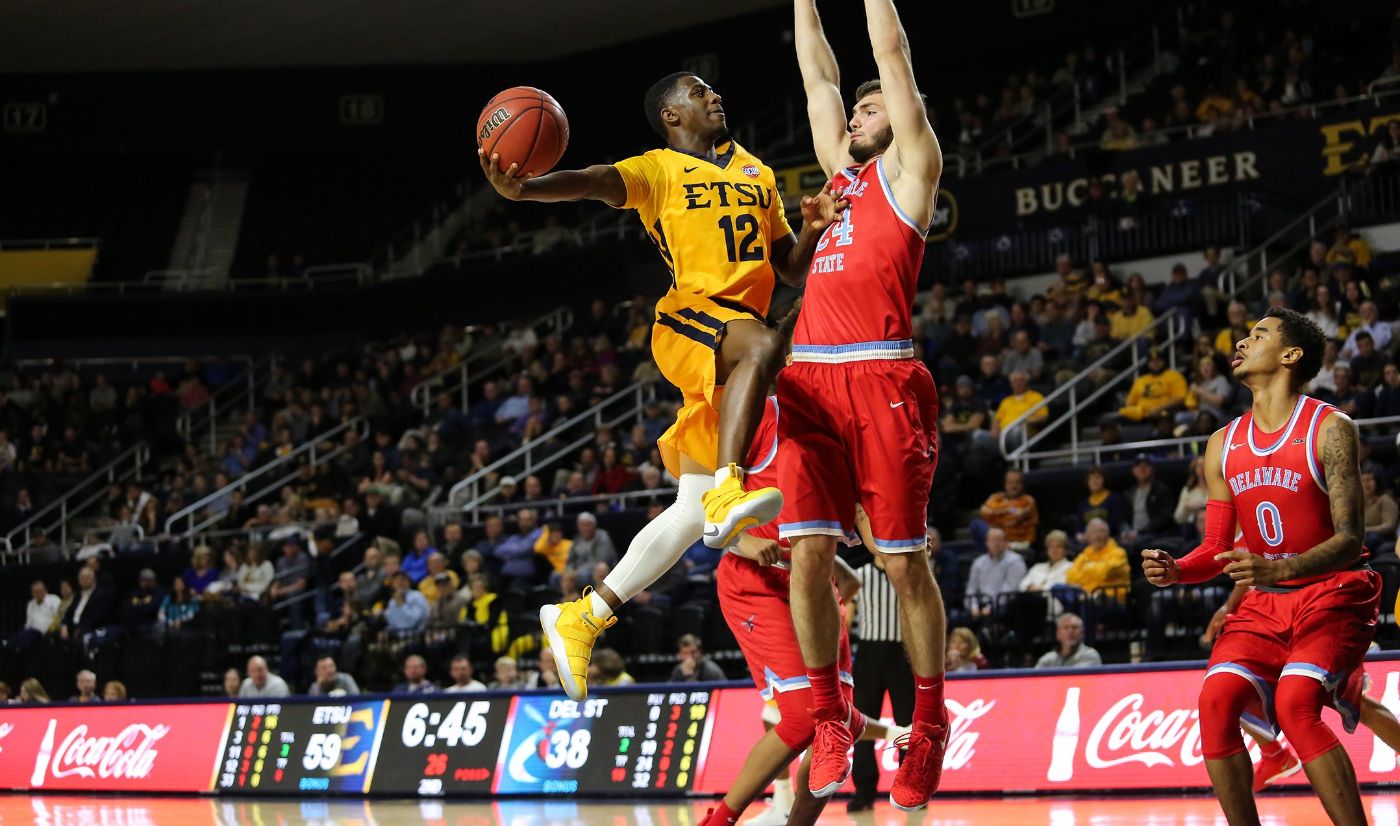 JOHNSON CITY, Tenn. (Nov. 20, 2017) – With only two points after seven minutes of play, many ETSU fans inside Freedom Hall may have worried about the result of Monday’s home opener against Delaware State. Turns out, there was no reason for concern.

Closing the first half with a 12-0 run then shooting 72 percent from the field and 57 percent from 3-point range in the second half, the Buccaneers ultimately cruised past the Hornets 81-57 on a night when the team’s 2017 NCAA Tournament banner was unveiled high above their home floor.

With the win, ETSU improves to 2-2 on the season, while Delaware State dropped to 1-4.

“Well, it was a tale of two halves,” said ETSU head coach Steve Forbes. “In the first half, we didn’t shoot the ball real well and set the game of basketball back about 30 years. We got good shots, but we just didn’t make them. The most encouraging thing though is we defended from start to finish and we’re really starting to develop an identity there.”

For the game, the Bucs forced the Hornets into 22 turnovers and collected 16 steals, holding Delaware State to just 39 percent shooting from the floor and holding the game in check while the offense found its footing. Ultimately, ETSU was led offensively by senior guard Desonta Bradford (Humboldt) with 16 points, while senior guard Jalan McCloud (Fort Worth, Texas) added 15, and both junior guard Kanayo Obi-Rapu (Greensboro, N.C.) and senior guard Devontavius Payne (Carbondale, Ill.) each collected 11.

The Bucs certainly got off to a slow start, missing their first seven shots from 3-point range and having scored just two points at the 13:14 mark of the first half. ETSU eventually cranked up its offensive effort thanks to a more aggressive approach on the defensive end, employing a full court press that helped ignite a 12-0 run to close the half and lead 25-16 at the break.

Senior post Peter Jurkin (Jubah, South Sudan), who scored a career high 17 points in the Bucs last outing against No. 7 Kentucky, picked up where he left off by posting team highs for points (5) and rebounds (7) before the halftime break.

In the second half, the Bucs turned it around from outside. After going just 2-of-12 from 3-point range in the first half, the team shot 8-of-14 from beyond the arc after the break. Those numbers took a 33-24 game and turned it into a full route blowout at 52-32 six minutes later.

Bradford finished 4-of-4 from 3-point range on the night, while Obi-Rapu was 3-of-4 and Payne was 2-of-5 from beyond the arc. Meanwhile, Jurkin just missed out on first career double-double with nine points and a career high 10 rebounds.

For Delaware State, Kobe Gantz led all scorers with 17 points.

The Bucs will be back in Freedom Hall for the second of three straight home contests this Wednesday night, as they host Troy at 7 p.m. For more on ETSU men’s basketball throughout the 2017-18 season, visit ETSUBucs.com and click on the men’s hoops link.