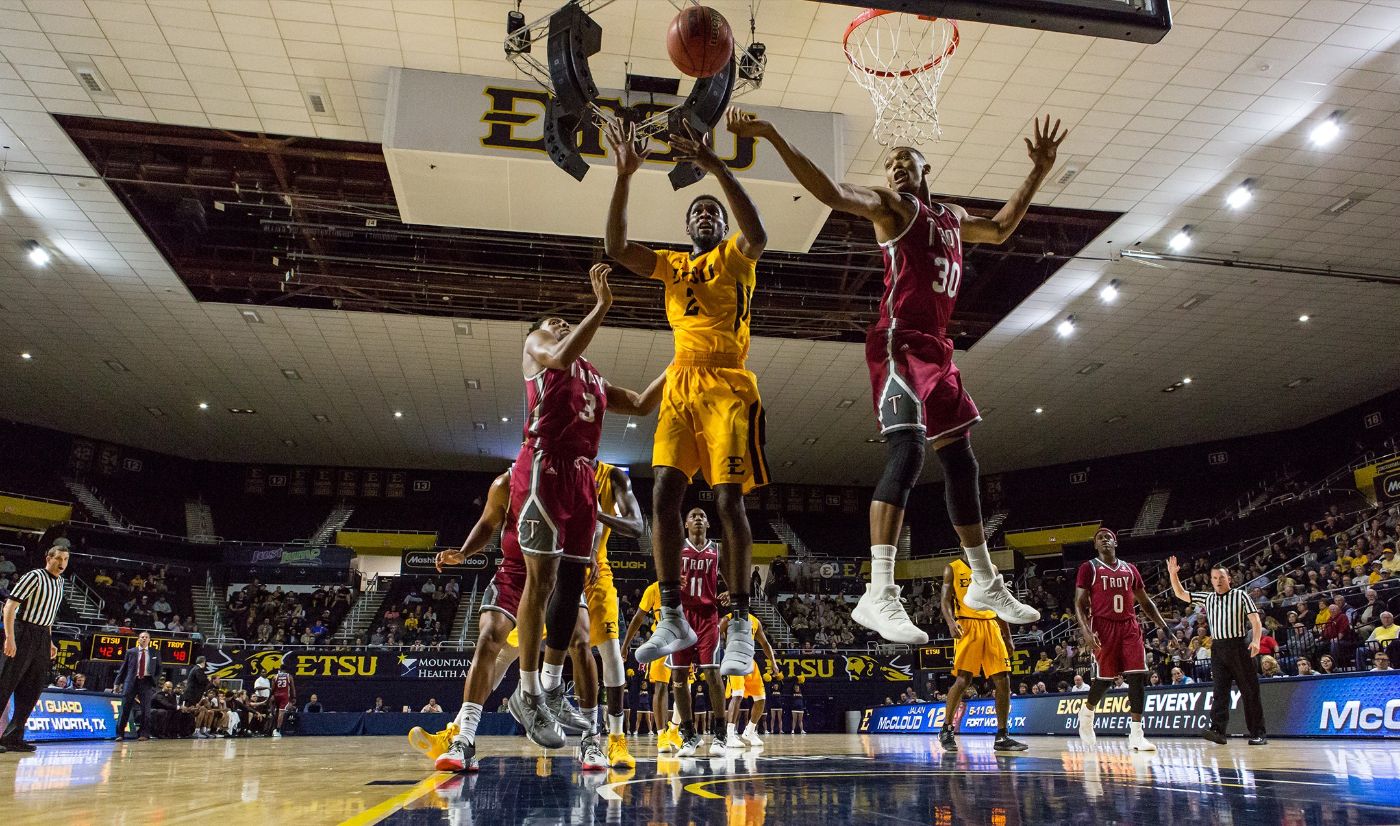 JOHNSON CITY, Tenn. (Nov. 22, 2017) – When Troy’s leading scorer Jordon Varnado went to the bench with his fourth foul and over eight minutes left in the game, the ETSU men’s basketball team looked poised to make a run at its non-conference foe Wednesday night inside Freedom Hall.

But then Varnado’s teammate Wesley Person took over.

With his team clinging to a 49-44 lead, the senior guard scored 17 straight points and 19 of his team’s final 24 to give the Trojans a 73-65 win over the Buccaneers. With the loss, ETSU dropped to 2-3 on the year, while Troy – the defending Sun Belt Conference champions – improved to 3-3.

“Our offense puts so much pressure on the defense to try and get stops, and it just becomes almost impossible – especially when you are playing against really good competition and two really good players,” said ETSU head coach Steve Forbes, referring to his team’s offense which shot 39 percent from the floor for the game. “Early on our offense was very discouraging because we didn’t score, and I felt like we had pretty good shots right at the basket. I’m going to have to do a better job of coaching this team and figure out who to put in position to score. I think then at the end we just got tired and Person went off.”

Person, who had not scored at halftime, finished with a game high 22 points, while Varnado had 21 for the Trojans. Meanwhile, the Bucs were led by senior guard Desonta Bradford (Humboldt) with 12 points, while fellow senior Jalan McCloud (Fort Worth, Texas) added 11. The Bucs also got a game high 12 rebounds from senior forward David Burrell (Milwaukee).

After struggling from beyond the 3-point arc early in games this year, the first half got off to a good start for the Bucs, who hit three 3-pointers in the opening four minutes of play to take an 11-9 lead. However, a six minute offensive drought then killed the ETSU momentum, allowing the Trojans to go ahead 19-11 with under 10 minutes left before the break.

The Troy lead grew to as many as 11 points before the Bucs pulled to within seven at 32-25 by the intermission. For ETSU, it was their lowest offensive first half output of the season, as Troy out-rebounded the Bucs 22-17, outscoring ETSU 12-6 in the paint and 12-4 in bench points.

In the second half, the Bucs kept hanging around thanks to a strong defensive effort and basically trailed by four or five points most of the way until Person took over.

The Bucs will be back in Freedom Hall for the third of three straight home contests this Saturday, as they host Fort Wayne at 4 p.m. For more on ETSU men’s basketball throughout the 2017-18 season, visit ETSUBucs.com and click on the men’s hoops link.