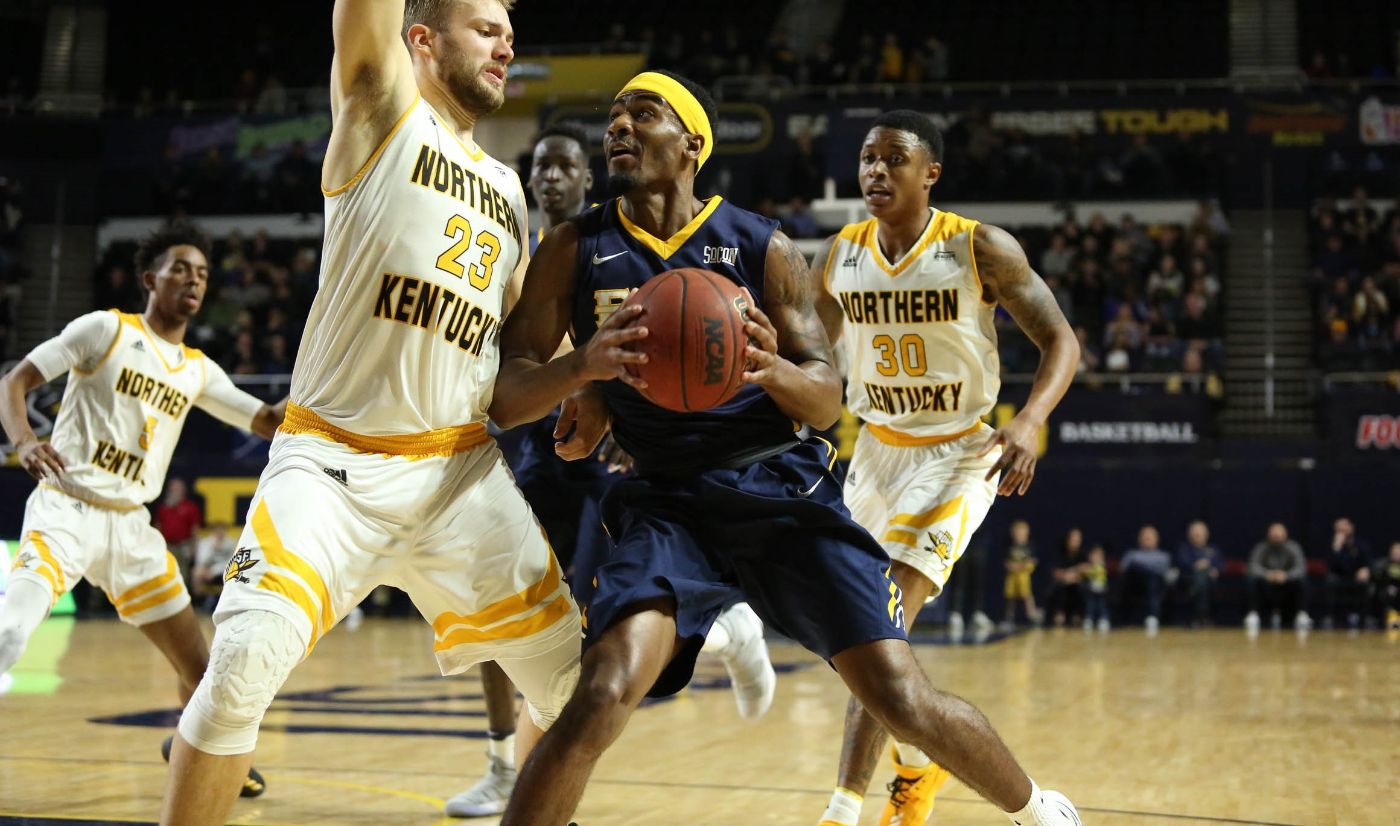 JOHNSON CITY, Tenn. (Dec. 6, 2017) – When the Horizon League Player of the Year Drew McDonald went to the bench with two fouls just over a minute into Wednesday night’s game at Freedom Hall, the ETSU men’s basketball team had to like its chances against Northern Kentucky.

Turns out, even with McDonald on the floor, it would not have mattered on this night.

The Buccaneers put together their most complete game of the season, shooting 60 percent from the floor en route to avenging a loss to the defending Horizon League champions earlier this season, dropping the Norse in convincing fashion, 84-71.

“I thought we played really well tonight from start to finish,” said ETSU head coach Steve Forbes, whose team improved to 5-3 on the young season. “I knew it would need to be that way for us for all 40 minutes. We really concentrated on not turning the ball over because that was a major problem for us the first time we played them earlier this season. We have a lot of respect for their program and they’re doing a lot of good things up there. This was a good win.”

The game was quite a change compared to the Bucs’ season-opening 81-63 loss at NKU back on Nov. 10. In that contest, the Bucs committed 20 turnovers, made only two 3-pointers, and shot 37 percent from the floor. On this night, ETSU cut the turnovers down to 10, made five 3-pointers, and improved on their shooting percentage by 23 points.

Meawhile, NKU – which entered the game with only two losses by a combined four points – fell to 6-3 on the season. The Norse were led by a game high 22 points from Carson Williams, while McDonald was held to just eight points in 17 minutes of action.

With McDonald on the bench for almost the entire first half, the Bucs took advantage by playing nearly a perfect 20 minutes of basketball. Shooting 59 percent from the floor, 44 percent from 3-point range, and a perfect 100 percent (10-of-10) at the foul line, ETSU put together runs of 15-0 midway through the half and closed with another 20-3 spurt to take a 46-28 lead into the break.

The Bucs committed just five turnovers in the first half and were paced by Payne’s 11 points. ETSU also out-rebounded the Norse 14-10 and forced NKU into 11 turnovers, outscoring their opponents 18-5 in points off turnovers.

After the break, ETSU never let the Norse get back into the contest, maintaining a double-digit lead that never got less than 12 points at 63-51, which came with just under 12 minutes left in the contest.

For the game, the Bucs out-rebounded the Norse 29-25 and forced NKU into 14 turnovers on the night, outscoring the Norse 22-10 off those turnovers. Even more impressive, the Bucs’ bench players outscored NKU 42-11 and ETSU also shot a strong 81 percent from the charity stripe (17-of-21).

The Bucs largest lead of the game was 21 points.

ETSU will return to action at home on Sunday afternoon at 2 p.m., hosting Hiwassee College inside Freedom Hall. For more on ETSU men’s basketball throughout the 2017-18 season, visit ETSUBucs.com and click on the men’s hoops link.