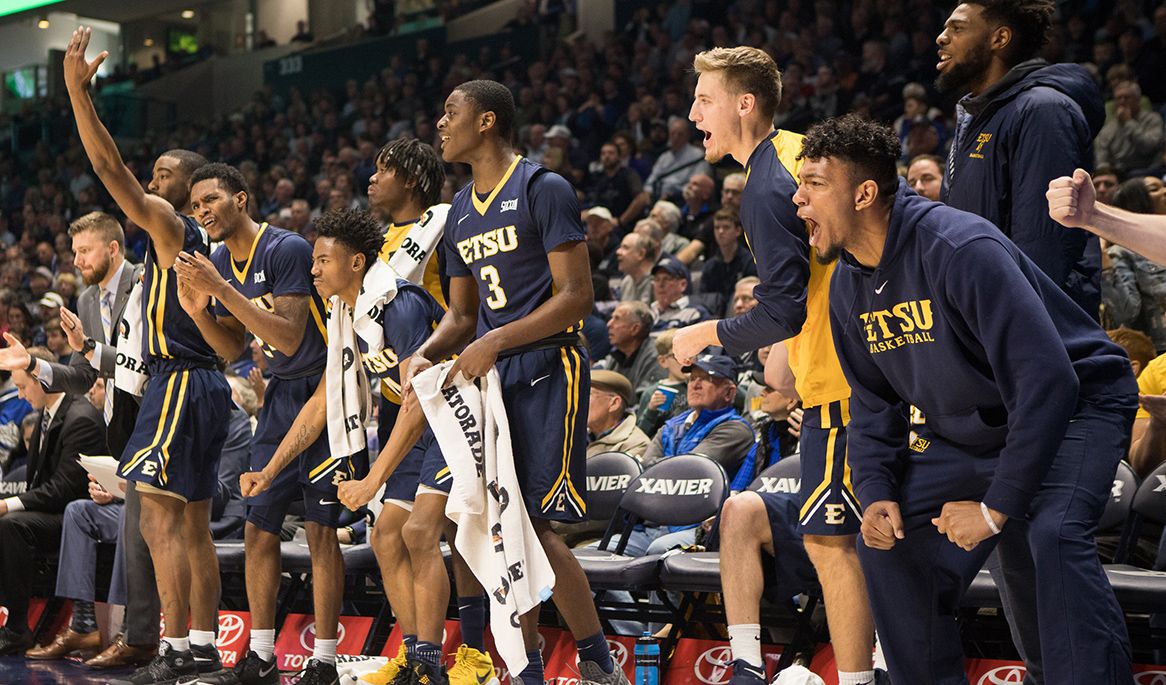 The ETSU bench reacts during the second half of Saturday's game. Photo courtesy of Kevin Schultz.
No. 10 Xavier escapes Bucs thanks to Bluiett’s heroics, 68-66
ETSU at Xavier | December 16, 2017
Related Links

CINCINNATI (Dec. 16, 2017) – With a 22-point lead and 14 minutes left in the second half, the ETSU men’s basketball team looked poised to collect the program’s first ever regular season victory over a team ranked in the Top 10 nationally. Unfortunately for the Buccaneers, they will have to continue to wait on that elusive, historic win.

No. 10 Xavier outscored the Bucs 39-14 for the remainder of Saturday’s game and ultimately took its only lead of the second half when All-American candidate Trevon Bluiett sank a fall away jump shot with six seconds left, lifting the Musketeers past ETSU 68-66 inside the Cintas Center.

The difficult loss dropped ETSU to 6-4 on the season, while Xavier improved to 10-1. ETSU will now turn its attention to another road contest as the Bucs head to Michigan for a matchup with Detroit on Tuesday.

“I cannot fault our guys’ effort because they played their hearts out,” said ETSU head coach Steve Forbes, whose team had just eight turnovers on the night. “Unfortunately, we just couldn’t finish. We had some opportunities and needed stops that we just couldn’t get. They couldn’t guard us in man, so they went to the zone and we ended up on our heels a bit. We just didn’t play well with the lead late in the game. It’s disappointing. We have a lot of respect for them and their program, but I thought we were the better team today. It just didn’t work out for us.”

The Bucs certainly looked like the better team until the 14:25 mark of the second half. At that point, a 3-pointer by ETSU freshman Bo Hodges (Nashville) had given the Bucs a 51-29 lead and the home crowd of 10,432 sat quiet and stunned. In fact, ETSU still led by 10 at 59-49 with six minutes left, but was unable hold.

After Bluiett’s heroics, the Bucs still had seven seconds left on the clock, but because Xavier had only three team fouls at that point of the second half, the Musketeers simply fouled ETSU three times to kill time and leave the Bucs with only one second left to attempt a desperation 3-pointer to end the game.

For the contest, senior guard Desonta Bradford (Humboldt) made the case that he was the best player on the floor, posting a double-double with a game high 20 points and 10 rebounds. He was joined in double figures by three other ETSU players, as senior post Peter Jurkin (Juba, South Sudan) finished with 11 points and a career high five blocks, while senior guard Jalan McCloud (Fort Worth, Texas) and junior guard Andre Edwards (Compton, California) added 10 points apiece.

For Xavier, Bluiett had a team high 18 points, while Naji Marshall had 15.

While Xavier entered the game as one of the nation’s top shooting teams with an average of 55 percent from the floor on the year, the ETSU defense held the Musketeers to just a 38 percent clip .

In fact, that defensive effort by the Bucs held Xavier to just 29 percent shooting the first half, while ETSU shot 57 percent from 3-point range and hit eight 3-pointers in the opening 20 minutes. That effort helped the Bucs build a 39-27 lead at the break.

After the intermission, Xavier did not score a basket until the 15:25 mark of the second half, allowing the Bucs to move build their largest lead of the game. It was at that point the Musketeers changed to a trapping 1-3-1 defense and slowly began to cut into the ETSU lead.