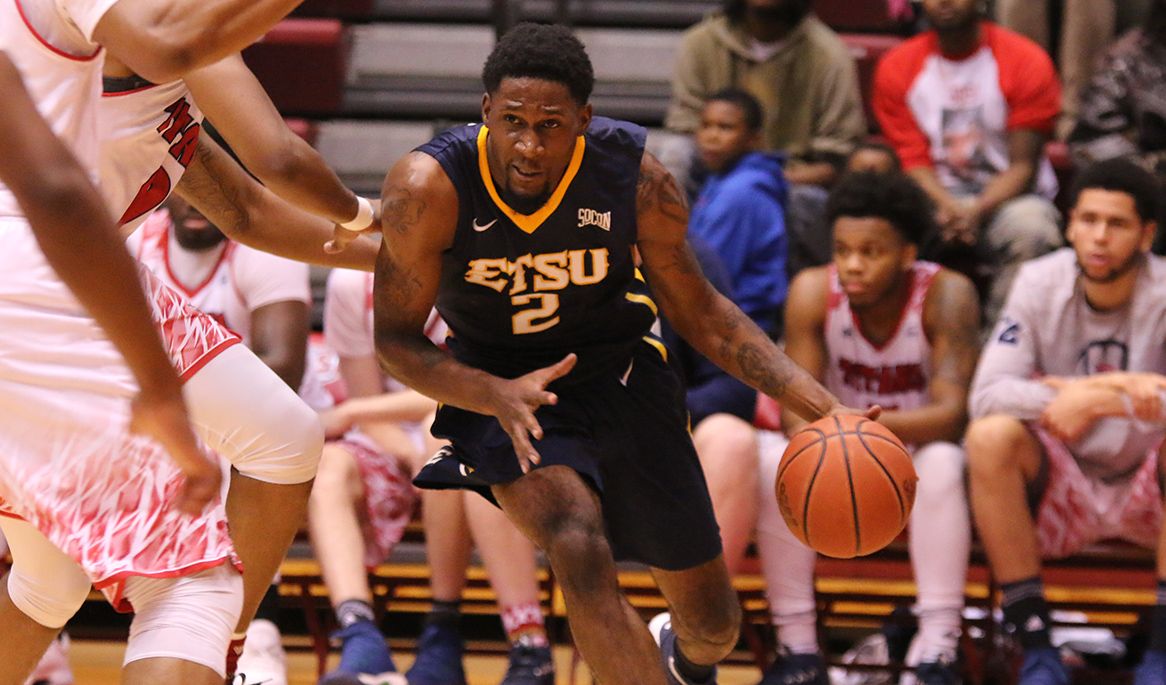 DETROIT (Dec. 19, 2017) – This time, the ETSU men’s basketball team was simply not going to relinquish a late-game lead.

After losing a heartbreaking two-point contest at No. 10 Xavier on Saturday afternoon, the Buccaneers overcame a five-point halftime deficit and showed resolve down the stretch to take a hard-fought victory over Horizon League foe Detroit Mercy 81-73 Tuesday night at Calihan Hall.

The Bucs, who improved to 7-4 on the season with the win, led by as many as 12 in the second half before seeing the Titans (4-8) cut that advantage to five with five minutes left. However, senior guard Desonta Bradford (Humboldt) made clutch plays down the stretch to end Detroit Mercy’s threat and finish with a game high 21 points, while fellow senior guard Jalan McCloud (Fort Worth, Texas) assisted that effort with 14 points on the night.

“I was proud of our composure tonight when we went down,” said ETSU head coach Steve Forbes, whose team won for the first time this season when trailing at halftime and has now won five of its last six games. “We didn’t play well at the end of the first half, but I’m proud of the way we battled. It wasn’t pretty and I thought we fouled too much, but for the most part we did a good job. The reason why we’ve gone on this run lately is we have taken care of the ball, we’ve rebounded well and shot well even though we’ve been on the road a lot.”

Indeed, this current six-day road trip that also followed finals week has been a challenge for the Bucs, but they now return home for a pair of games against Georgia Southern (Dec. 22) and Tusculum (Dec. 28) with a chance to build even more momentum before opening Southern Conference play on the road Dec. 31 at Mercer.

In this game, the Bucs committed just seven turnovers compared to 16 for the Titans, and they scored 22 points off those UDM miscues. ETSU also outscored Detroit Mercy 42-18 in the paint, while shooting 51 percent for the field and 76 percent from the free throw line.

An 11-of-27 effort (41 percent) from 3-point range was the only statistic that kept UDM in the contest.

The first half featured offensive runs by both teams, but it would be the Titans that put together the most impressive surge. After the Bucs used an 11-0 spurt and another 7-2 run to take a 28-19 lead with 5:25 left, the Titans outscored ETSU 20-6 over the remainder of the half to take a 39-34 advantage into the intermission.

Before the break, Detroit Mercy shot 50 percent from 3-point range (6-of-12) compared to a 1-of-8 clip for the Bucs. The Titans also out-rebounded ETSU, 21-17. Bradford led all players with 11 points in the opening 20 minutes.

UDM did score the next five points to get within five and put some pressure on the Bucs with five minutes left, but that’s as close as the game would get the rest of the way.

For the Titans, three players reached double figures led by Kameron Chatman’s 20 points. Meanwhile, Bradford eclipsed 20 points for the second time in as many games after netting 20 in the Xavier contest.