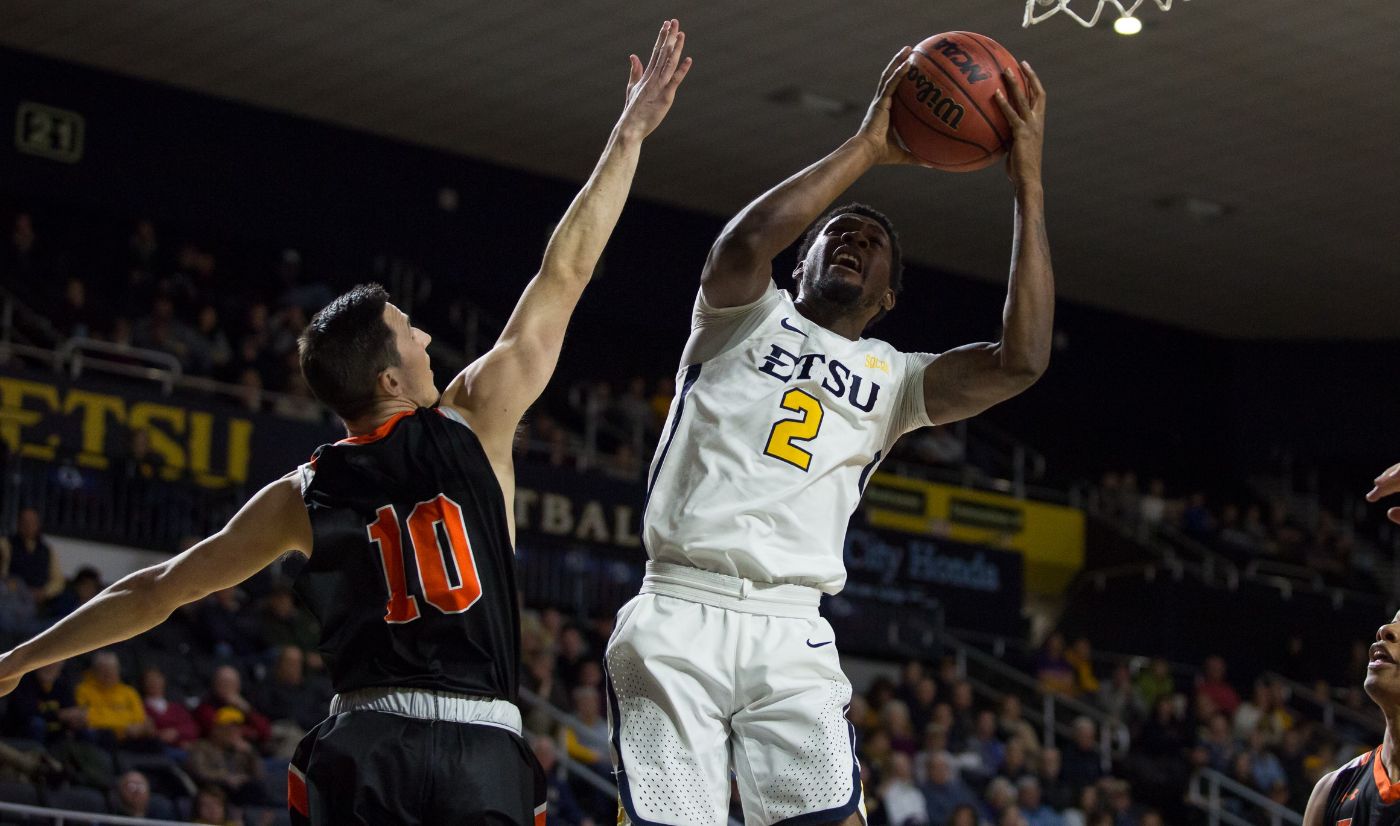 JOHNSON CITY, Tenn. (Dec. 28, 2017) – Before turning its attention to the start of Southern Conference play next week, the ETSU men’s basketball team had one final, non-conference tune-up Thursday night against Tusculum College. For the final 30 minutes of game play, the Buccaneers looked like a well-oiled machine.

Falling behind 19-16 with 10 minutes left in the first half, the Buccaneers’ defense turned up the pressure and the offense closed the half with an impressive 31-5 offensive run, as ETSU ultimately led by as many as 30 and cruised to an 84-65 win inside Freedom Hall. With the victory, the Bucs closed the non-conference portion of their schedule with a 9-4 record.

“I told the team afterwards that they should be proud of 9-4, because it’s tough to win nine with the schedule we just played,” said ETSU head coach Steve Forbes, whose team has won seven of its last eight games. “When you look back at how we played in the opener and where we are now, we’ve improved a lot. Tusculum challenged us early, but we played through it. I did tell them though that we have to play better going into the game at Mercer.”

The game certainly got off to an inauspicious start for the Bucs, as Tusculum shot over 55 percent in the opening 10 minutes and led 19-16 with 10:37 left before the break. However, at that point the game took quite a turn, as the Bucs would outscore the Pioneers 31-5 over the next nine minutes of play and ultimately led 47-28 at the intermission.

In the first half, three ETSU players posted double-figure scoring, with Bradford leading the way with 13, while Obi-Rapu had 11 and Burrell pitched in 10. The Bucs shot 51 percent from the floor, out-rebounded the Pioneers 25-14 and outscored them 28-10 in the paint.

After the break, the Bucs surged ahead by 30 at 74-44 before the Pioneers chipped away at that advantage over the final nine minutes of the game to finish the contest down 19. Tusculum had two players reach double figures, led by guard Donavan Donaldson’s 11 points.

ETSU out-rebounded the Pioneers 45-36 and forced Tusculum into 16 turnovers, while collecteding 11 steals on the night. The Bucs held a 48-20 advantage on points in the paint, and outscored the Pioneers 21-11 off turnovers. A crowd of 3,218 were on hand despite the game being scheduled over the holiday week.

The Bucs will now begin preparations for their SoCon opener at Mercer on Dec. 31. Tip is set for 2 p.m. in Macon, Ga. For more on ETSU men’s basketball throughout the 2017-18 season, visit ETSUBucs.com and click on the men’s hoops link.