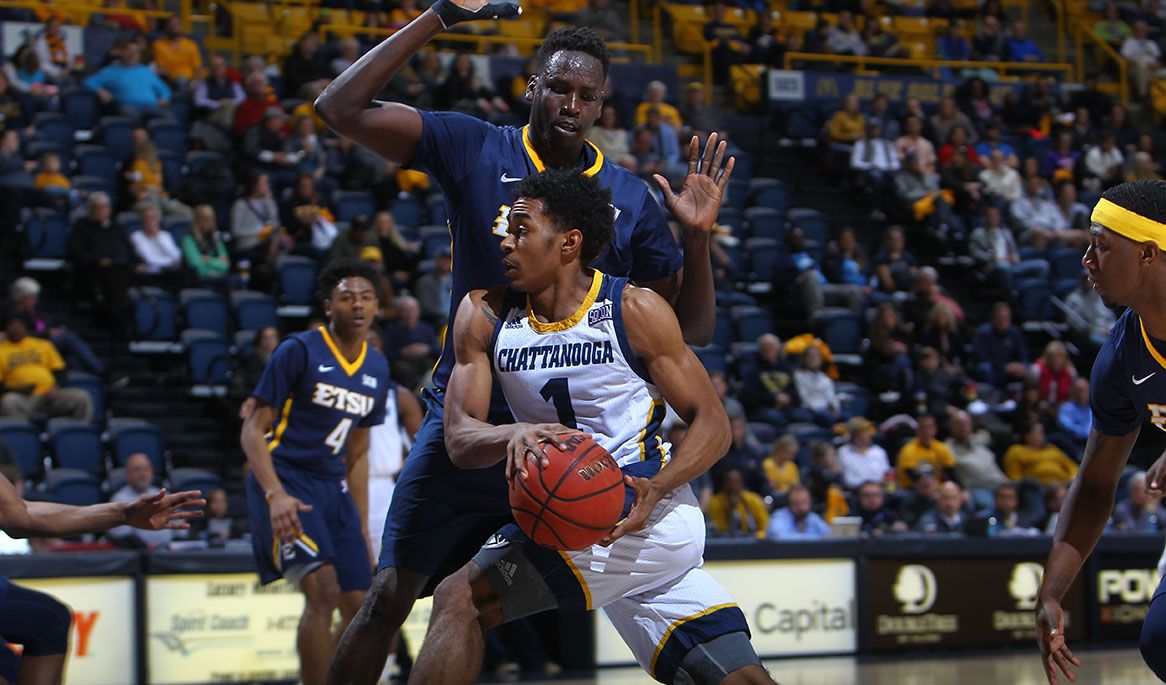 CHATTANOOGA (Jan. 6, 2018) – It may not go down as the greatest or most tightly-contested game in the history of the men’s basketball rivalry between ETSU and Chattanooga, but for Buccaneer fans, it sure did feel good.

Playing arguably its best half of basketball ever on its rival’s home floor, ETSU took a 21-point lead into halftime and then cruised through the second half to collect a dominating 85-66 win over the Mocs in Southern Conference action Saturday evening inside McKenzie Arena.

“Our strength is in our numbers and we saw that again tonight,” said ETSU head coach Steve Forbes. “I don’t think I’ve ever had all 11 players score in the first half like that. We were really pleased with the way we came out ready to play even though this was the back end of the road trip. Being on the road so much as really toughened our guys up and it’s showing out there.”

Shooting 56 percent from the floor and 37 percent from 3-point range, the Bucs also out-rebounded the Mocs 42-29 and outscored them 50-32 in the paint. ETSU also held a 39-11 advantage in bench points.

The Bucs could not have scripted a better start to the game. Opening with a 13-1 run and not allowing a Mocs’ field goal for nearly four minutes of play, ETSU went on to hold UTC to just two baskets over the first 13 minutes of action and eventually led by as many as 23 in the first half. In the end, the Bucs took a 48-27 lead into the halftime locker room.

Before the intermission, ETSU out-rebounded the Mocs 21-8, while outscoring them 32-12 in the paint and 24-2 in bench points. The only downside for the Bucs was foul trouble, as ETSU committed 13 fouls in the opening half and had several post players saddled with three fouls by the break, allowing the Mocs to score nine of their 27 points at the charity stripe.

But overall, it was arguably the most dominating half of basketball ever for the Bucs on their arch rivals’ home floor.

After the break, the two teams basically traded baskets, with UTC unable to get any closer than 16 at 69-53 with just under eight minutes left in the game. For the Mocs, Nat Dixon had a team high 20 points to lead the UTC attack.

Defensively, the Bucs held the Mocs to a 39 percent shooting effort and allowed just five made 3-pointers in the game.

The Bucs will now return home for a pair of games inside Freedom Hall, beginning Thursday, Jan. 11 against UNCG at 7 p.m. For more on ETSU men’s basketball throughout the 2017-18 season, visit ETSUBucs.com and click on the men’s hoops link.