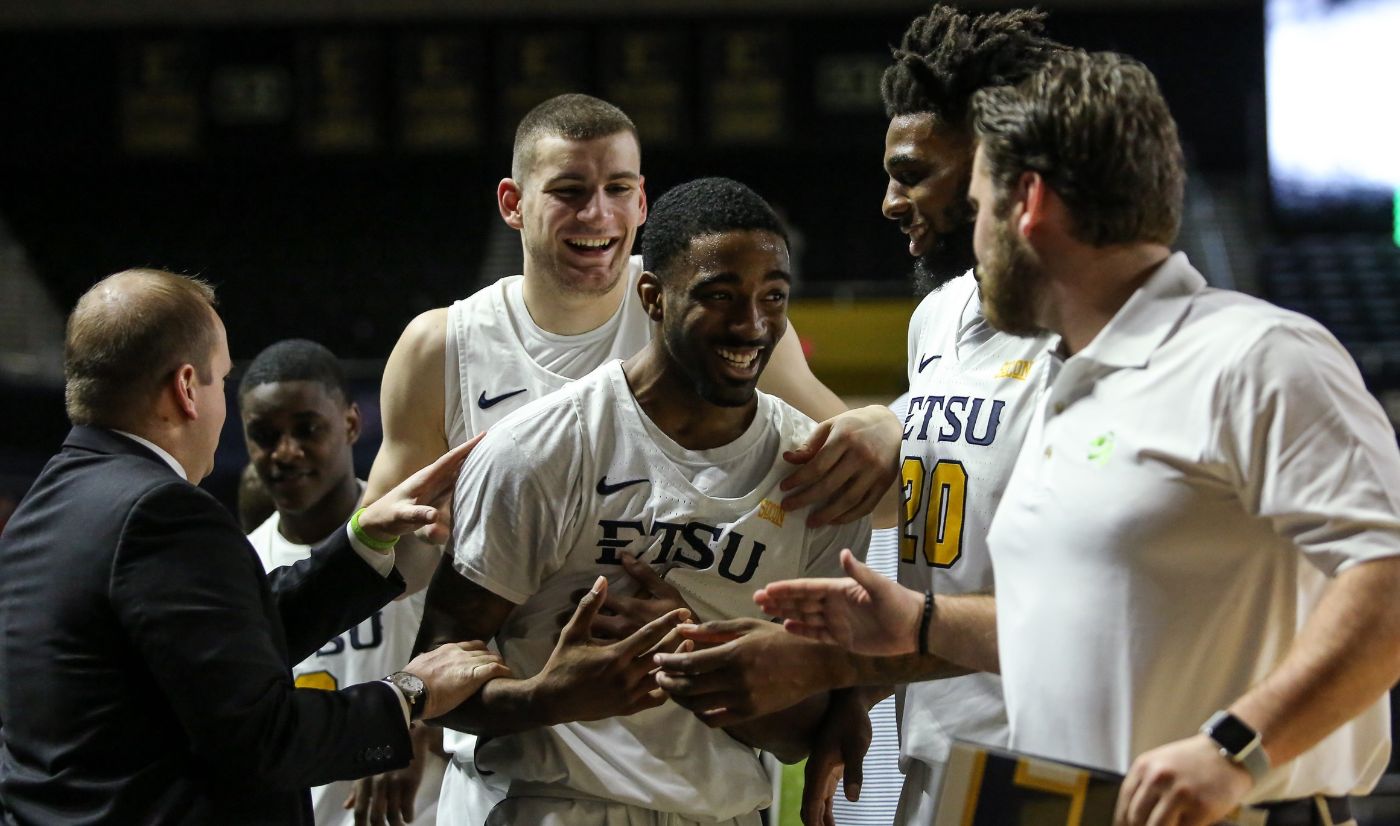 JOHNSON CITY, Tenn. (Jan. 13, 2018) – Following an important win over UNC Greensboro on Thursday night and with a trip to Furman awaiting next week, Saturday afternoon’s home matchup with VMI could have been considered a “trap” game for the ETSU men’s basketball team. Turns out, the Buccaneers weren’t interested in overlooking the Keydets.

On a night when senior guard Desonta Bradford (Humboldt) became the 41st player in program history to reach 1,000 points for his career, the Bucs got a game high 17 points from both senior guard Devontavius Payne (Carbondale, Ill.) and senior forward David Burrell (Milwaukee) to roll to an 89-48 Southern Conference win over VMI inside Freedom Hall. With the victory, the Bucs have now won 12 of their last 13 games to improve to 14-4 overall and 5-0 in SoCon play. Meanwhile, VMI dropped to 5-10, 0-4.

“I didn’t think we looked good offensively to start the game,” said ETSU head coach Steve Forbes, whose team won its eighth straight game to mark the longest winning streak in his three seasons on the Bucs’ bench. “But our defense was really solid again tonight and it kept us in it until the offense came on. I’m really happy for Desonta. We’ve been fortunate to coach him the last three years and have really enjoyed watching him blossom into the player he is today.”

The Bucs, who were without the services of senior guard Jalan McCloud (Forth Worth, Texas) for family reasons, also got 16 points from freshman guard Bo Hodges (Nashville). Meanwhile, Bradford scored 14, including his milestone reaching 1,000th point, which came with 5:07 left in the contest. For the game, ETSU once again shot over 50 percent from the field (53.2), while also out-rebounding the Keydets 43-34, besting them 48-16 on points in the paint, and outscoring them 55-14 in bench points.

In the first half, the Bucs struggled offensively and found themselves down 6-2 four minutes into the contest. However, that’s when Hodges came off the bench and promptly provided a spark by scoring the next nine points in the contest to make it 11-6 in favor of ETSU. From there, the Bucs methodically built on their advantage to ultimately hold a 35-19 lead at the break.

Before the intermission, ETSU out-rebounded the Keydets 23-19 and shot 43.3 percent from the field, while holding the Keydets to just 19.2 percent shooting. The Bucs also outscored the Keydets 20-4 in the paint and 24-0 in bench points. Payne led the Bucs with 11 points in the opening 20 minutes.

In the second half, Payne continued to fan the flames that Hodges initially ignited by opening the scoring with back-to-back 3-pointers. At that point, any hope the Keydets had of a comeback disappeared. After a 15-3 run to start the half, the Bucs led by 27 and never looked back.

For VMI, Bubba Parham led the way with 16 points. ETSU held VMI to just 26 percent shooting in the game and a 23.8 percent mark from 3-point range. The Bucs also dished out 22 assists and grabbed 10 steals.

The Bucs will now enjoy a four-day break before returning to the road to face Furman on Jan. 18 at 7 p.m. in Greenville, S.C. For more on ETSU men’s basketball throughout the 2017-18 season, visit ETSUBucs.com and click on the men’s hoops link.