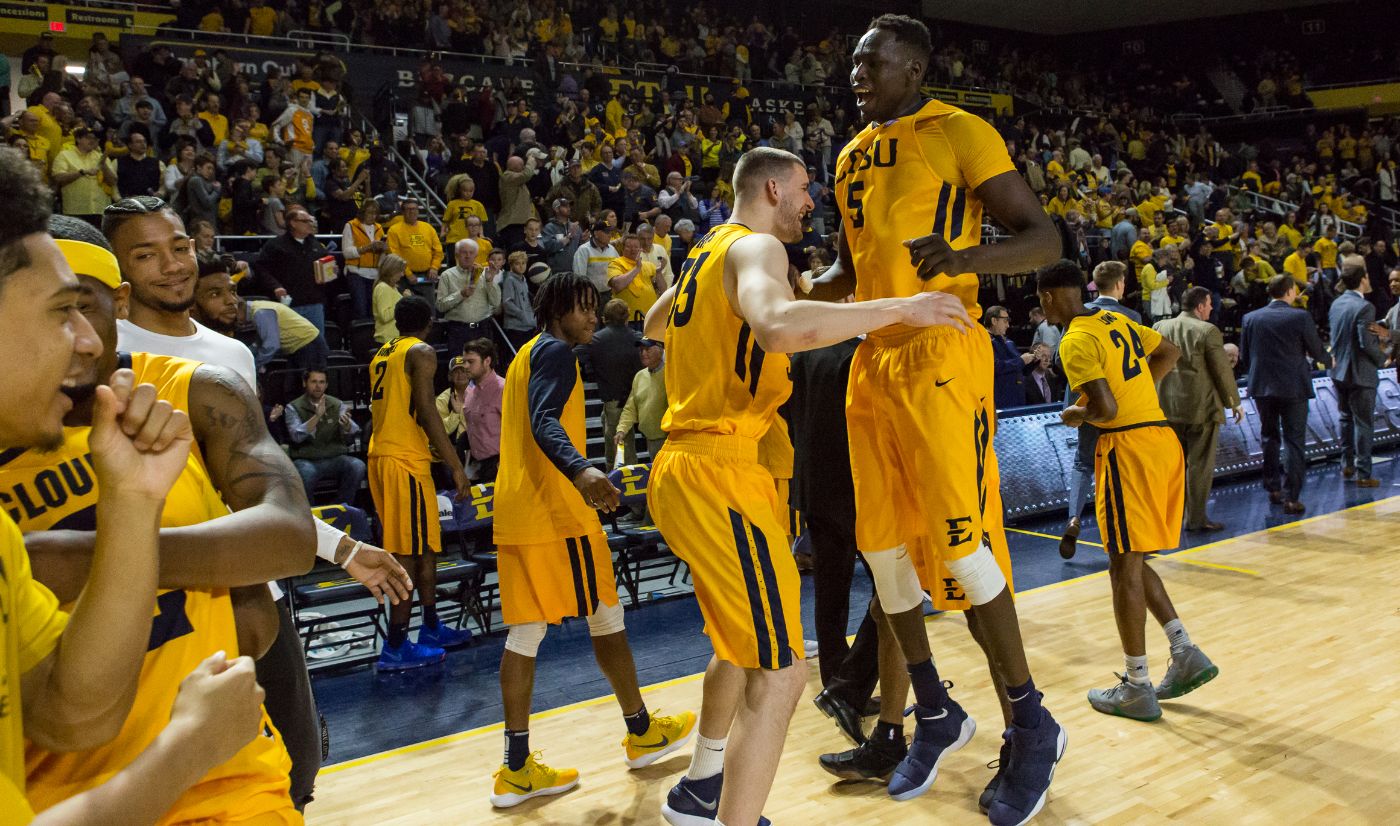 In front of a sellout crowd of 6,149 fans Saturday afternoon inside Freedom Hall, senior guard Desonta Bradford (Humboldt) netted a team high 22 points and senior post Peter Jurkin (Juba, South Sudan) collected a double-double with 16 points and 13 rebounds, as the Buccaneers rolled past Southern Conference rival Chattanooga 81-61 to pick up their 15th straight win. With the victory, ETSU improved to 21-4 overall, 12-0 in SoCon play, while UTC dropped to 8-17, 2-10.

This year’s edition of the Bucs now join the 1952-53 team at No. 2 on the all-time list for consecutive wins. The next milestone would be the school record of 16 straight wins set in 2003-04. The win also came on a day when the Bucs’ 1967-68 squad celebrated the 50th anniversary of the program’s first trip to the NCAA Tournament and only Sweet 16 appearance.

“What a great crowd tonight,” said ETSU head coach Steve Forbes, whose team has now won 19 of its last 20. “Our fans really relate to this team, and what a special place this is to be able to recognize people like the 1967-68 team. They had a chance to talk to our guys today before the game, and our players really listened to them. Give Chattanooga credit, I really think they’ve improved since we play them earlier this year, but I thought we came into this one focused and ready.”

Along with Bradford and Jurkin, the Bucs also got 15 points from senior guard Jalan McCloud (Fort Worth, Texas) and 14 from senior forward David Burrell (Milwaukee), as the Bucs shot 58 percent from the field and 56 percent from 3-point range. For UTC, guard Rodney Chatman led all scorers with a career high 26.

While the game went the Bucs way, the Mocs looked primed to give ETSU a challenge in the early going, taking a lead and trading baskets to keep the game tied at 18 with 9:04 left before the intermission. However, at that point Bradford began to impose his offensive skills on the game, scoring 10 of the Bucs next 15 points over one stretch and powering a 14-2 run that gave ETSU its largest lead of the half at 32-20 with 2:53 left before the break.

In the first half, the Bucs out-rebounded the Mocs 21-15 and shot 48 percent from the floor, while clamping down on defense to hold UTC to just 36 percent shooting in the opening 20 minutes. While Bradford had a team best 10 before the half, Chatman had a game best 12. After the break, the Bucs methodically built on their advantage, using a 12-4 run and another 10-4 spurt to build a 67-46 lead with 7:27 left in regulation, all but putting the game away.

The Bucs will enjoy a six day break before returning to action next Saturday, Feb. 10th on the road at VMI. For more on ETSU men’s basketball throughout the 2017-18 season, visit ETSUBucs.com and click on the men’s hoops link.