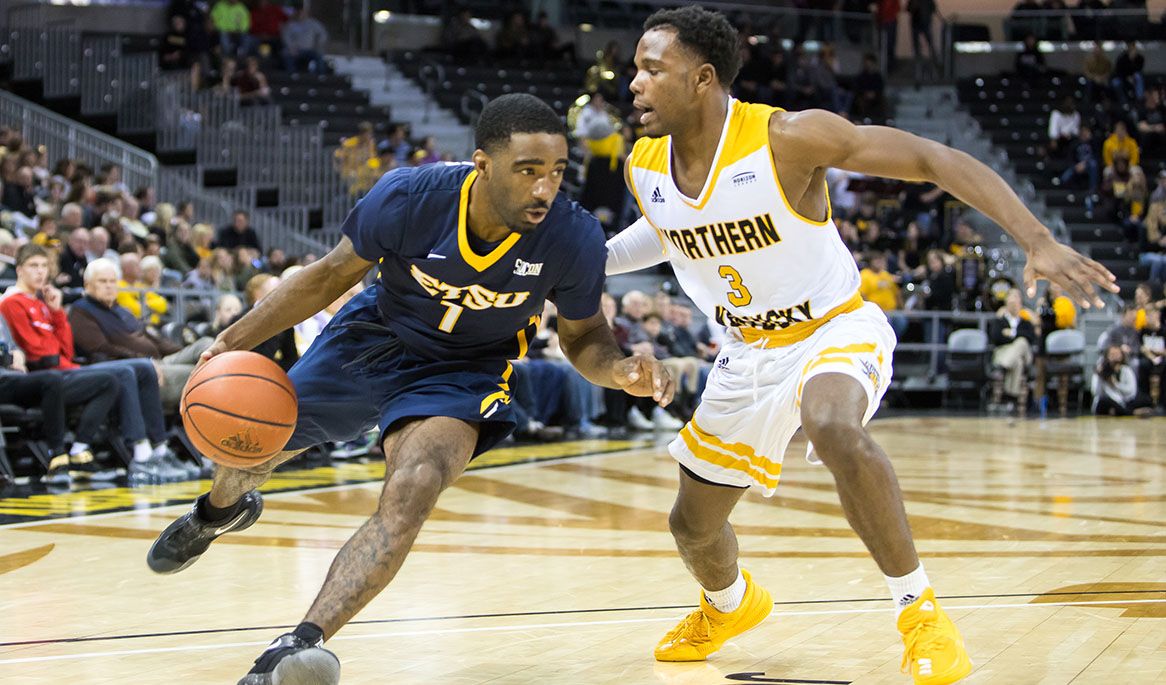 Senior Desonta Bradford had a team high 21 points in the loss to UNCG.
Bucs’ streak comes to an end in 74-56 loss at UNCG
ETSU at UNCG | February 12, 2018
Related Links

GREENSBORO, N.C. (Feb. 12, 2018) – Facing a chance to stand alone with the longest win streak in program history, the ETSU men’s basketball team unfortunately watched its special run of success come to an end Monday night inside the Greensboro Coliseum.

With the loss, the Bucs dropped to 22-5 overall, 13-1 in SoCon play, but will still return to Johnson City with a game-and-a-half lead over the second-place Spartans, who improved to 20-6, 11-2.

“I thought we got manhandled and only one guy came to play … and that was Desonta Bradford,” said ETSU head coach Steve Forbes, whose team had the nation’s longest win streak at 16 games heading into the contest. “This has kind of been coming because we haven’t played really well the last week. But give UNCG credit, they came out with an edge and executed their stuff. We’ve got to regroup and go back to work.”

Holding the Bucs to just 30.3 percent shooting, while hitting on 49 percent of their own shots, the Spartans got a team high 20 points from guard Francis Alonso, while teammates Demetrius Troy and Marvin Smith had 17 and 13 points, respectively. Meanwhile, forward James Dickey had eight points and eight blocks to lead the UNCG defensive effort.

For the Bucs, Bradford was the only player in double figures with 21 points on the night.

In the first half, the Spartans and their large crowd clearly came ready to put up a fight and provided a significant punch to the Bucs over the opening 12 minutes of play. Early turnover problems and inefficient offense for ETSU – combined with five 3-pointers by the Spartans – allowed UNCG to build a lead of 13 at 27-14 with just over seven minutes left in the opening 20 minutes.

At that point, the Bucs relied on their own defensive effort to turn the tables on the Spartans, forcing nine UNCG turnovers by the half and outscoring the Spartans 11-2 off those miscues. With a 14-5 advantage in second chance points and a 23-19 advantage on the boards, the Bucs used those numbers to outscore the Spartans 19-6 to close the half, and when a 3-pointer by Jalan McCloud (Fort Worth, Texas) found the bottom of the bucket at the first half buzzer, ETSU trailed by just two at 33-31. Both Bradford and Alonso looked like all-conference players early on, both leading the way with 11 points each.

After the break, the Bucs’ momentum from the end of the first half did not carry over, as UNCG outscored ETSU 20-8 over the first eight minutes of play to take its largest lead of the game at that point, 53-39. The Bucs got back to within 10 at 53-43, but that would be as close as they could get the rest of the way.

The Bucs will return to action for their final regular season road game Saturday at 2 p.m. against SoCon foe Western Carolina. For more on ETSU men’s basketball throughout the 2017-18 season, visit ETSUBucs.com and click on the men’s hoops link.