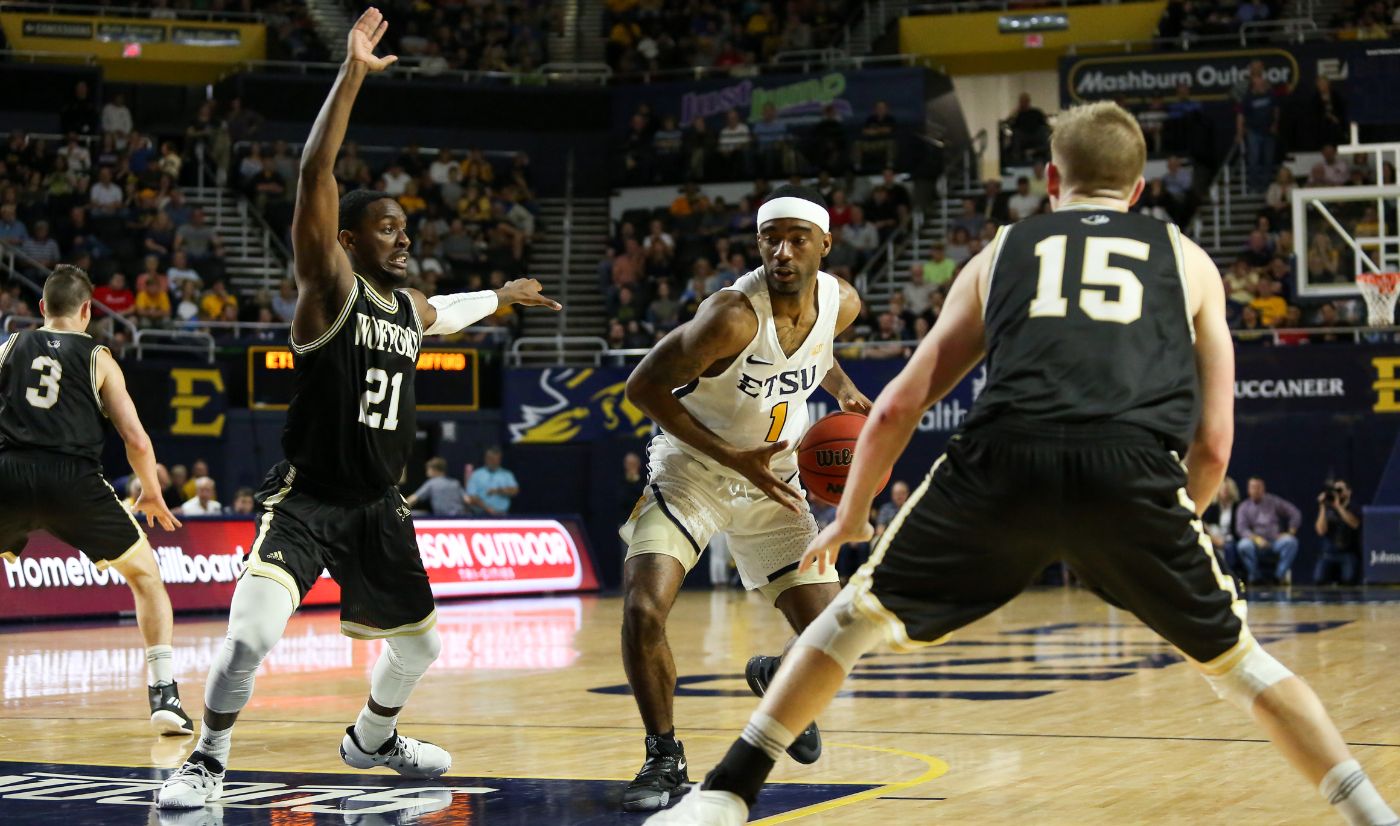 JOHNSON CITY, Tenn. (Feb. 23, 2018) – For the second game in a row, the defensive efficiency that defined the ETSU men’s basketball team for most of the season abandoned the Buccaneers.

This time, it was the Wofford Terriers that came into Freedom Hall and shot 56 percent from the field, had four players post double-figure scoring, and ultimately took home a 75-71 win Friday night in Southern Conference play. With the loss, the Bucs dropped to 23-7 overall and 14-3 in the SoCon, backing into a first-place tie with UNC Greensboro and needing a win in Sunday's finale with Furman to guarantee at least a share of the league championship.

“Nothing like making it hard on yourself,” said ETSU head coach Steve Forbes, whose team has now lost back-to-back games for the first time this season after having posted a 20-0 record when scoring 70 or more points prior to this current three-game home stand. “We still have a chance to win a league title and there’s a lot to play for just like last year when we tied with them (UNCG). Tonight’s game was nip and tuck and I’m not going to fault our team’s effort. Even with everything that happened we still had a chance to tie it and go to OT, but we didn’t finish.’”

The Bucs certainly had a good opportunity at the end.

Trailing 73-71 with 20 seconds left, ETSU raced to the offensive end following a free throw miss by the Terriers. Senior guard Desonta Bradford (Humboldt) drove to the basket and found fellow senior David Burrell (Milwaukee) under the goal, but Burrell’s layup attempt missed the mark with 10 seconds left. Wofford rebounded the ball and secured the win with another pair of makes at the charity stripe.

For Wofford, forward Cameron Jackson – who did not play in the Bucs’ win earlier this season in Spartanburg, S.C. while recovering from a concussion – led the way with a team high 19 points, while Fletcher Magee had 17, Nathan Hoover collected 13 and Storm Murphy netted 12.

Meanwhile, the Bucs got a game high 19 from Bradford, while freshman guard Bo Hodges (Nashville) had 16 and senior post Peter Jurkin (Juba, South Sudan) pitched in 11. The Bucs shot 48 percent from the floor on the night and 82 percent at the foul line in the loss, dishing out 15 assists on 21 made baskets.

In the first half, both teams traded baskets and the lead multiple times, with the game tied at 36 by the intermission. After the break, Wofford took a quick lead but never could pull away. In fact, no team led by more than five points throughout the game. Ultimately, the crowd of 6,005 fans that filled Freedom Hall for Star Wars Night and Fan Appreciation Day left the building having to wait until Sunday to see if the Bucs can clinch their second straight regular season title.

The Bucs will return to Freedom Hall for their regular season finale on Sunday, as ETSU will host Furman on Senior Day at 2 p.m. For more on ETSU men’s basketball throughout the 2017-18 season, visit ETSUBucs.com and click on the men’s hoops link.