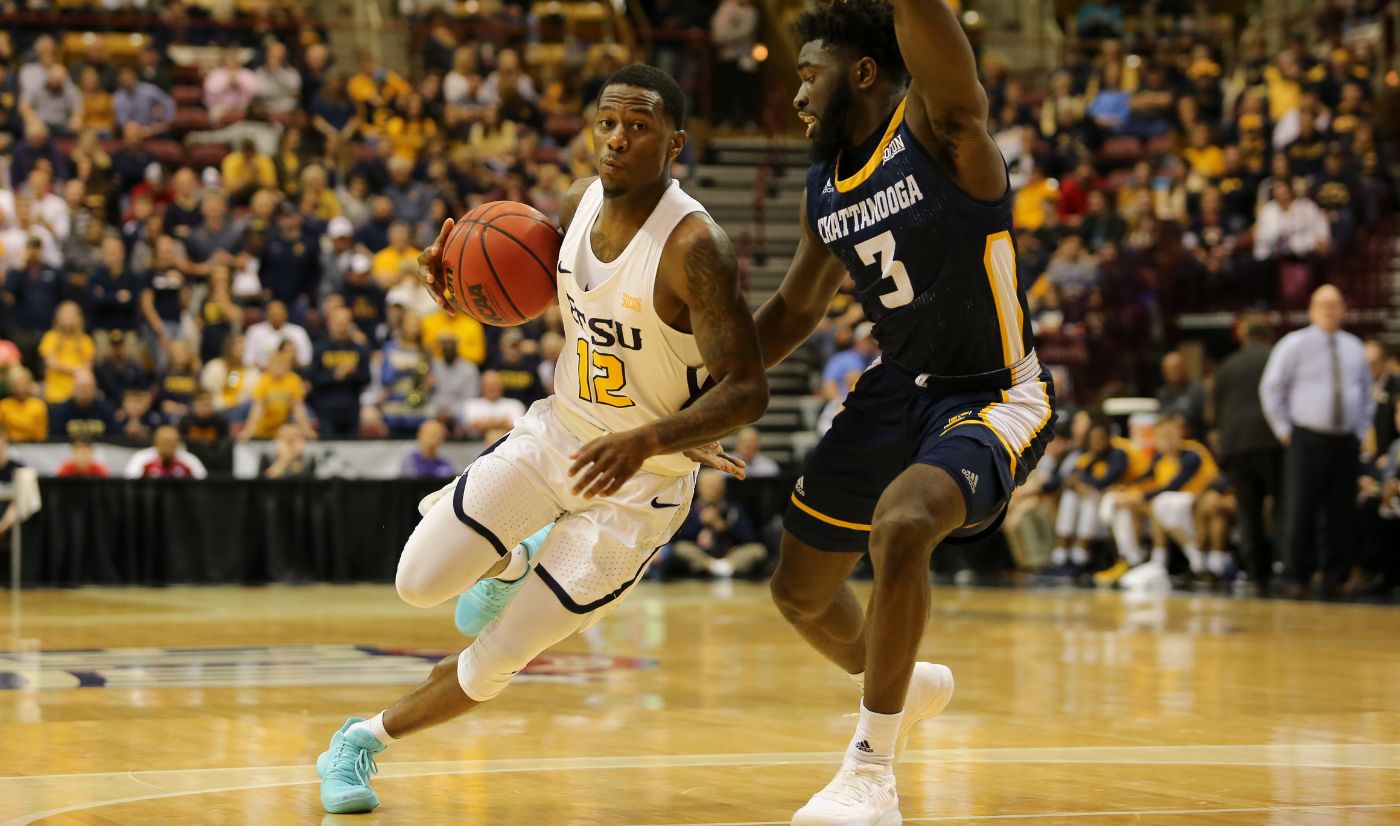 ASHEVILLE, N.C. (March 3, 2018) – What makes a win in the SoCon Tournament quarterfinals even better? Doing it by defeating rival Chattanooga for the third time in a single season and for the fifth time in a row.

Senior guard Jalan McCloud (Fort Worth, Texas) – who had struggled with illness over the last three weeks of the regular season – looked healthy on this night, scoring a game high 22 points as the Buccaneers shot 58 percent from the floor and pounded the Mocs 77-59 in their opening game of the Southern Conference Tournament Saturday evening inside the U.S. Cellular Center.

With the win, the Bucs improved to 24-8 on the year and will face Furman, which beat Western Carolina in Saturday's night cap quarterfinal. ETSU’s Sunday SoCon semifinal against the Paladins is set to tip at 6:30 p.m. Meanwhile, Chattanooga’s year ends at 10-23.

“I always say the first four or five minutes of the second half sets the tone, and tonight we played well coming out of halftime,” said ETSU head coach Steve Forbes, whose team opened the second half on a 14-4 offensive run which ballooned their 38-31 halftime lead to 17 with 14 minutes left in regulation. “I think we were really locked in and did what we wanted to do defensively, especially in the second half. I think we got our pop back.”

That pop had been missing recently, as ETSU lost three in a row and four of its last five game to end the regular season. However, on this night, the numbers looked more like the Bucs’ squad that had won 16 games in a row earlier in the season.

For the game, the Bucs outscored UTC 62-28 in the paint and shot 70 percent from two-point range in the contest (33-of-47). The team also only committed eight turnovers in the game and held the Mocs to 41 percent shooting from the floor.

Along with McCloud, the Bucs also got 14 points from senior guard and SoCo Player of the Year Desonta Bradford (Humboldt), while both freshman guard Bo Hodges (Nashville) and senior post Peter Jurkin (Juba, South Sudan) added 12 points apiece. For Chattanooga, both Makinde London and Makale Foreman scored a team high 13.

Despite making just one 3-pointer in the first half, the Bucs shot 56.3 percent from the field and chose to do their damage in the paint, outscoring the Mocs 32-12 on the inside to build their 38-31 lead by the halftime break. That Bucs’ advantage was not easily gained, as the Mocs hit four 3-pointers and shot well at 50 percent from the field, taking a 30-29 lead with four minutes left in the half. ETSU answered by closing on a 9-1 run heading into the intermission.

In the opening 20 minutes, McCloud led the Bucs with 11 points.

After the break, McCloud again ignited an ETSU rally, scoring four points and playing strong defense as the Bucs used an 8-0 run to take a 46-33 lead by the under 16 minute media timeout. From there, the Bucs lead grew to as many as 17 before the Mocs made one last-gasp effort to recover with a 10-2 run that cut the Bucs’ advantage to just nine with 10:40 left in regulation.

However, the Bucs would not allow the comeback, going on another 9-3 run to move back ahead by 16. Both team traded baskets the rest of the way.

For more on ETSU men’s basketball throughout the 2017-18 postseason, visit ETSUBucs.com and click on the men’s hoops link.