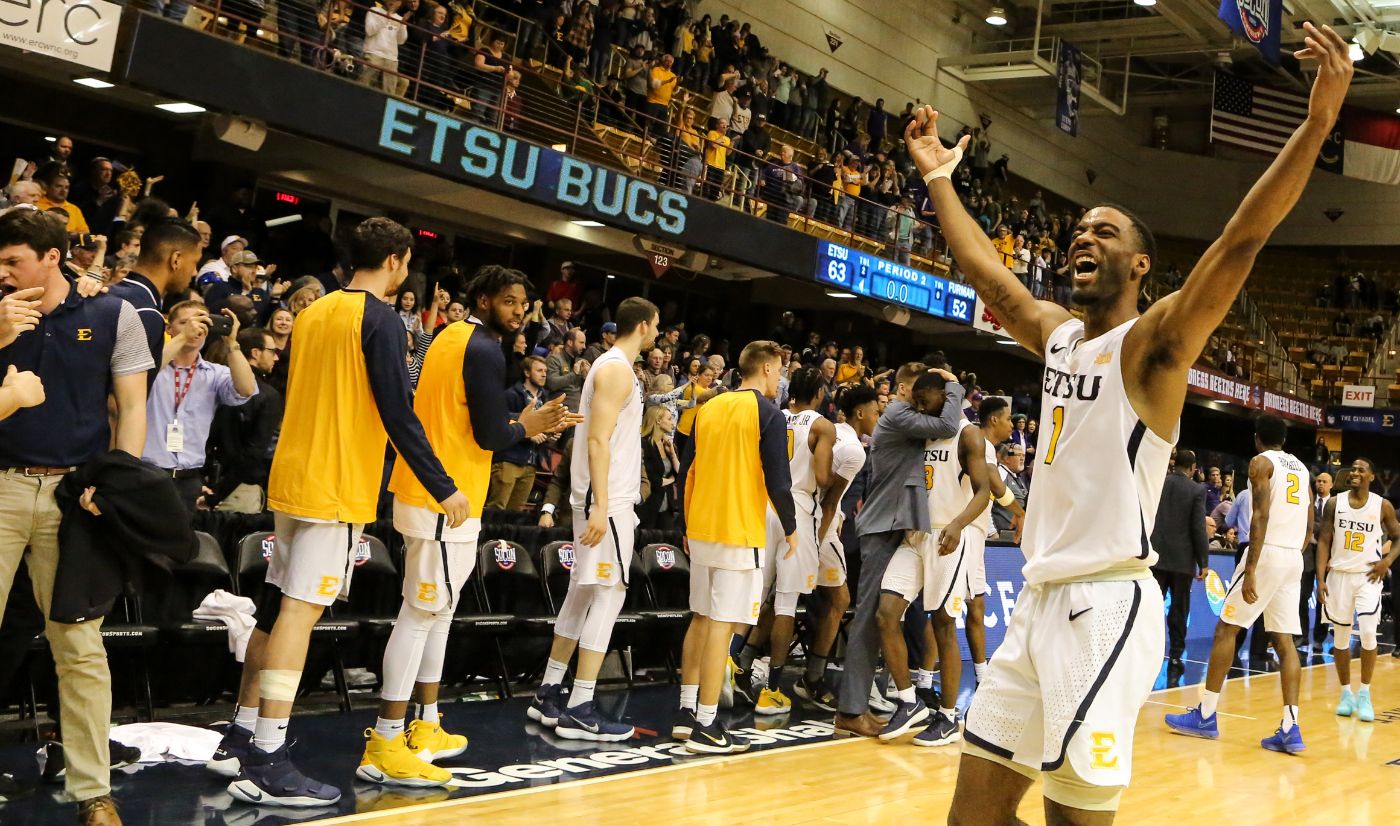 ASHEVILLE, N.C. (March 4, 2018) – Just one week ago, the Furman Paladins came into Freedom Hall and capitalized on a struggling defensive performance by the ETSU men’s basketball team to ruin the regular season finale for the Buccaneers.

On Sunday evening in the semifinals of the Southern Conference Tournament, the Bucs did all they could and more to erase that memory – and the result was special.

Holding Furman to just 19 points in the first half and a 32 percent shooting clip for the game, ETSU built a 23-point, second-half lead and ultimately cruised to a 63-52 win over the Paladins inside the U.S. Cellular Center. With the win, the Bucs improved to 25-8 on the season and will play in their third consecutive SoCon Tournament title game, as they will be paired in a rematch of the 2017 championship with UNC Greensboro. The Spartans defeated Wofford in a dramatic 56-55 semifinal earlier in the day.

Tip for the SoCon title game is set for 9:01 p.m. on Monday and the game will air nationally on ESPN2.

“I’ve coached a lot of really great teams, but that’s as good a defensive performance as I’ve ever seen from a team over 40 minutes,” said ETSU head coach Steve Forbes. “They were 1-of-17 from 3-point range in the first half, and Furman is a good team. I just think our will was really strong tonight.”

Along with a defense that held the Paladins to 15.4 percent shooting from 3-point range (4-of-26), the Bucs also outscored Furman 15-4 in points off turnovers. On the offensive end, the Bucs also held a 40-26 advantage on points in the paint and out-rebounded the Paladins 41-38.

The Bucs’ defense was locked in during the first half, allowing the Paladins to score just eight points over the first 12 minutes of action and holding Furman to a 24 percent shooting percentage. On the other end of the floor, the Bucs were spreading the wealth, as seven players scored and the team shot 45 percent from the floor to build a lead of as many as 15. By the break, the Bucs had outscored the Paladins 22-10 in the paint and 11-3 off turnovers to enjoy a 32-19 advantage at the intermission.

In the second half, both teams traded baskets for the opening four minutes of play before a 10-0 run by the Bucs resulted in their largest lead of the game at 48-25 with 12:46 left. However, at that point, the Paladins tried to work their way back into the contest, but ran out of time as an 11-point deficit remained when the buzzer sounded.

For more on ETSU men’s basketball throughout the 2017-18 postseason, visit ETSUBucs.com and click on the men’s hoops link.