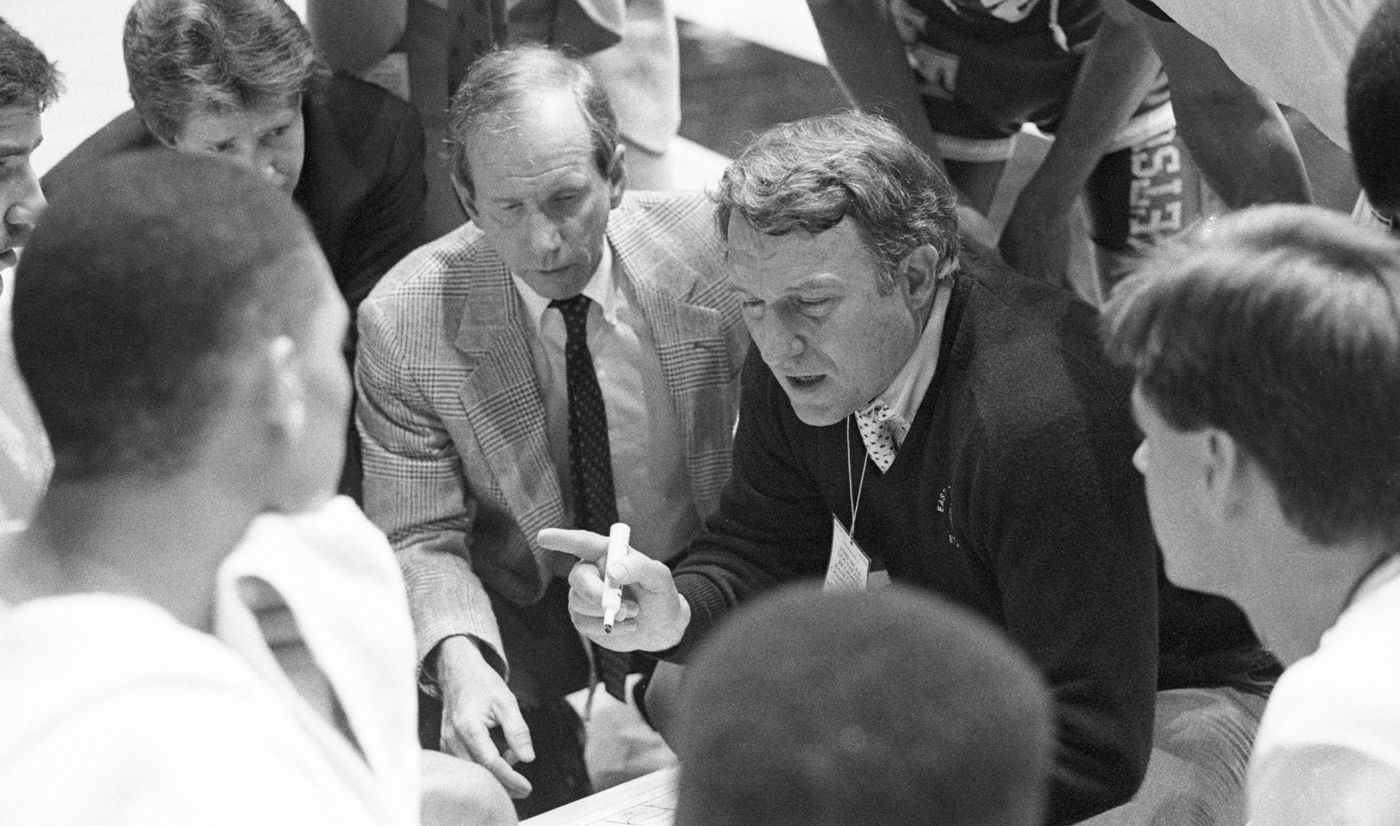 Les Robinson launched the ETSU men's basketball team on a unprecedented run of success in the late 1980s and early 1990s.
Les Robinson named to 2018 SoCon Hall of Fame class

SPARTANBURG, S.C. (March 28, 2018) – The Southern Conference announced Wednesday that former ETSU men’s basketball head coach Les Robinson, who ignited the program’s most prolific run of success in the late 1980s and early 1990s, will be inducted into the league’s Hall of Fame later this year.

The 2018 class includes four legendary coaches and two standout student-athletes, and marks the first-ever inductees for The Citadel, VMI, Western Carolina and Wofford. This year’s group of individuals represents the eighth class of inductees into the league’s Hall of Fame, highlighting 97 years of athletic success.

Student-athletes who competed for a minimum of two seasons in the Southern Conference were eligible for consideration, along with coaches and administrators who spent at least five years in the league. A pool of more than 200 candidates from the conference’s current and former member institutions were nominated for consideration. The pool of former student-athletes, coaches and administrators was cut down to 40 individuals who comprised the final ballot. A voting panel of 20 media members and league administrators made the selection of the induction class.

Les Robinson, Men’s Basketball/Administration (The Citadel, 1974-85, 2000-08; ETSU, 1985-90) – Les Robinson served as the head men’s basketball coach and director of athletics at league schools The Citadel and ETSU during his illustrious career, earning SoCon Coach of the Year honors at each institution. Robinson combined for 213 wins at the schools, good for fifth in league history when he departed the SoCon and still in the top 10 nearly 30 years later. A two-time South Carolina Coach of the Year, Robinson led The Citadel to its first 20-win in school history in 1978-79. At ETSU, Robinson guided the Bucs to SoCon tournament titles in 1989 and 1990 and a regular-season championship in 1989-90, when he was named the Tennessee Coach of the Year. After spending his final four years at ETSU as the basketball coach and director of athletics, Robinson began a six-year run as the head coach at NC State, followed by four-year stint as the Wolfpack’s AD. In 2000, he returned to The Citadel, serving as the school’s AD until retiring in 2008. Robinson, who served on both the NCAA Division I Basketball Committee and the NIT Selection Committee, was named the AstroTurf Southeast Region’s Director of Athletics of the Year in 2007. He was inducted into ETSU's Hall of Fame in 2006 and The Citadel's Hall of Fame in 2012.

Mike Ayers, football (ETSU, 1985-87; Wofford, 1988-2017) – Mike Ayers completed a 33-year head coaching in 2017 with a 218-160-2 record. After starting his head coaching career at league member ETSU in 1985, Ayers began a three-decade run at Wofford in 1988, inheriting a 1-10 Division II program and transforming the Terriers into an FCS power. Ayers went 207-139-1 at Wofford, including a 161-118-1 record in the 24 years since the Terriers joined the SoCon in 1997 to rank third in league history in coaching wins behind only SoCon Hall of Famers Jerry Moore of Appalachian State and Wallace Wade of Alabama and Duke. A five-time SoCon Coach of the Year, Ayers led the Terriers to five SoCon titles and to the I-AA/FCS playoffs eight times, reaching the semifinals in 2003, when he earned the Eddie Robinson Award as the top FCS coach, and the quarterfinals five times. Ayers’ Wofford teams had at least one CoSIDA Academic All-District honoree each year from 2000 to his retirement in 2017 and produced four CoSIDA Academic All-Americans and two FCS Athletic Directors Association Student-Athletes of the Year. He coached three SoCon Defensive Players of the Year, three Jacobs Blocking Award winners, two SoCon Offensive Players of the Year and two SoCon Freshmen of the Year.

Ron Carter, men’s basketball (VMI, 1975-78) – The first VMI student-athlete to have his jersey retired, Ron Carter scored 2,228 career points for the Keydets, graduating with seven school records to his name, including his scoring average of 26.3 points per game his senior year. Carter, whose career point total was good for fifth in league history when he graduated, led the Keydets to SoCon regular-season and tournament titles in 1975-76 and 1976-77. Included in those consecutive NCAA appearances were VMI’s runs to the Elite Eight in 1976 and the Sweet 16 in 1977. A three-time first-team all-conference selection and all-tournament pick, Carter was the league’s player of the year in 1976-77 and 1977-78 and the SoCon tournament’s Most Outstanding Player in 1976. Carter was also a two-time All-East Region selection before being selected in the second round of the 1978 NBA Draft by the Los Angeles Lakers and enjoying a two-year NBA career. A 1989 inductee into VMI’s Hall of Fame, Carter was named to the third team of the Southern Conference’s 75th Anniversary Men’s Basketball Team.

Susan Gardner Mayhorn, Women’s cross country and track and field (Western Carolina, 1989-93) – A 31-time All-Southern Conference selection in cross country and track and field, Susan Gardner Mayhorn earned one all-conference honor in cross country, 18 in indoor track and field and 12 in outdoor track and field. After winning the indoor high-jump title in 1991, Mayhorn became the first female Catamount runner to earn all-conference cross country honors with a fourth-place finish at the SoCon Championship that fall. In 1992, Mayhorn won the SoCon indoor mile-run championship and indoor and outdoor titles in the 800-meter run. The 1993 NCAA Woman of the Year for North Carolina colleges and universities, she was the first female in SoCon history to break the 5-minute barrier in the mile and set 18 school records during her career. Mayhorn, who was also a three-time Academic All-American, graduated summa cum laude and was a Southern Conference Dorothy Hicks Postgraduate Scholarship recipient. She was inducted into Western Carolina’s Hall of Fame in 2004.

Chal Port, Baseball (The Citadel, 1965-91) – Chal Port coached The Citadel’s baseball team for 27 years, compiling a record of 641-386-2 (.624) and posting winning records in 24 of those seasons. Port, who finished his career as the Southern Conference’s leader in overall and league wins (253), guided The Citadel to the 1990 College World Series, and the Bulldogs remain the only Division I military school to achieve that feat. A six-time SoCon Coach of the Year, three-time South Carolina Coach of the Year and two-time Atlantic Region Coach of the Year, Port led his teams to seven league titles and five NCAA regionals. He was named the Sporting News National Coach of the Year in 1990, when, in addition to leading the Bulldogs to the College World Series, he guided his squad to a school-record 46 wins, including a school-record 26-game win streak, and a No. 6 final national ranking. Port, who graduated all but three of his players in 27 years and produced 12 professional players, was inducted into the American Baseball Coaches Association Hall of Fame in 1995 and the Charleston Baseball Hall of Fame in 2006. He was an honorary inductee into The Citadel Hall of Fame in 1996.

Debbie Southern, Women’s Tennis (Furman, 1985-2015) – Debbie Southern led Furman’s women’s tennis program to unprecedented heights during her 31-year tenure. Southern guided the Paladins to 461 overall wins and a 213-22 SoCon record (.906 winning percentage) prior to her retirement in 2015, including a streak of 100 consecutive league wins from 1998-2010, a streak that has never been matched in any league sport. She coached Furman to 19 regular-season SoCon titles, 16 league tournament titles and nine NCAA berths. She was a 14-time SoCon Coach of the Year and saw her players earn 14 SoCon Player of the Year awards, including four-time winner Megan Dunigan, who was a member of the SoCon’s inaugural Hall of Fame class in 2009. Southern coached nine SoCon Freshman of the Year award winners, five SoCon Sportsmanship Award winners, 12 SoCon Championship Most Outstanding Players and more than 150 All-SoCon selections. She also coached 33 individual and 16 doubles champions from 1985-97 before the SoCon Championship changed from an individual to a team scoring format. In 2000, she became the first person to earn the South Carolina Tennis Association Coach of the Year award on two separate occasions (1991, 2000). Southern was inducted into the South Carolina Tennis Hall of Fame in 2004, the ITA Women's Collegiate Tennis Hall of Fame, along with her late father and her mother, in 2012, and the Furman Athletics Hall of Fame in 2013.

ABOUT THE SOUTHERN CONFERENCE

The Southern Conference, in its 97th season of intercollegiate competition, is a national leader in emphasizing the development of the student-athlete and helping build lifelong leaders and role models. The conference has been on the forefront of innovation and originality in developing creative solutions to address issues facing intercollegiate athletics. From establishing the first conference basketball tournament (1921), to tackling the issues of freshman eligibility (1922), to developing women’s championships (1984) to becoming the first conference to install the 3-point goal in basketball (1980), the Southern Conference has been a pioneer. The Southern Conference is the nation’s fifth-oldest NCAA Division I collegiate athletic association.

The conference currently consists of 10 members in six states throughout the Southeast and sponsors 22 varsity sports and championships that produce participants for NCAA Division I Championships.