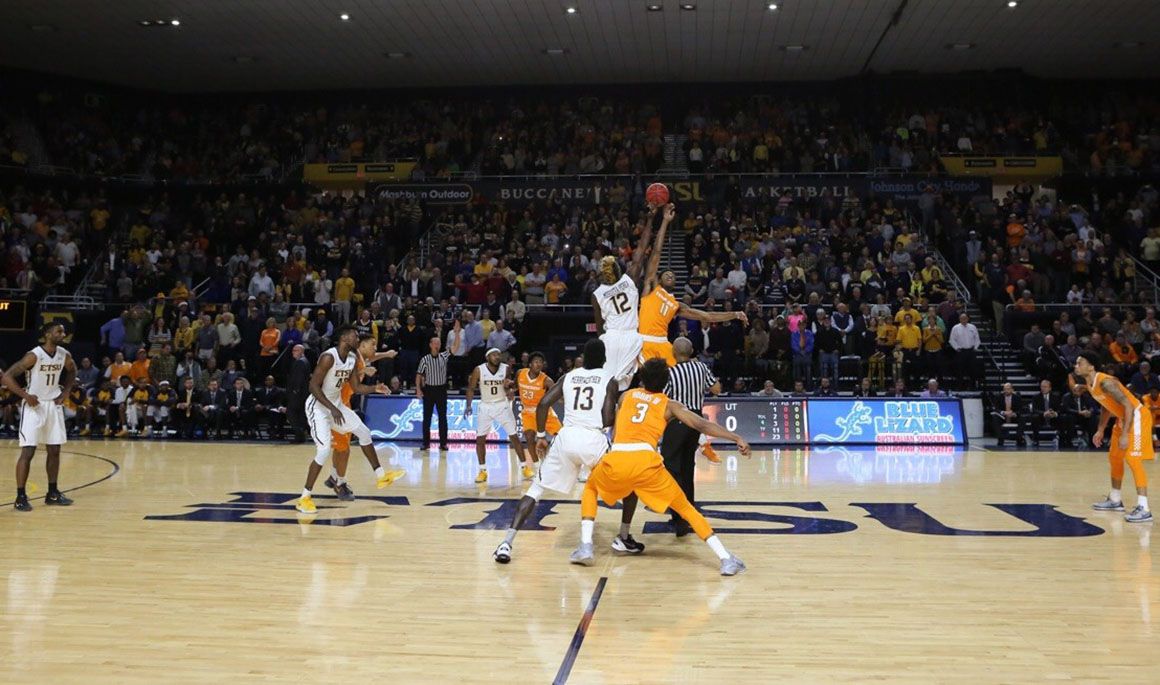 JOHNSON CITY, Tenn. (Sept. 19, 2018) – As mid-major men’s basketball programs across the country released their 2018-19 schedules over the past two months, much of the national conversation surrounding that process has centered on the difficulties programs like ETSU and others are having as scheduling becomes dominated more and more by power conferences.

In an effort to counter that trend, ETSU head coach Steve Forbes has announced that the Buccaneers will join a new, innovative college basketball scheduling alliance for the 2019-20 season. The Alliance, which is the brainchild of college basketball insider and ENTHUSIADAMS™ owner Mark Adams, will be a consortium of “like-minded” mid-major programs from multiple conferences for the 2019-20 season, with plans to expand that presence further in the years to come.

This approach is designed to insure member programs of at least one road and one home non-conference game against another member of The Alliance. Match-ups will be determined by Adams, who will use NCAA Tournament Selection metrics and an analysis of returning players/recruiting classes to develop those pairings. These “challenge games” as they are being called, will be played on Nov. 26 and Nov. 30 of 2019.

“Mark Adams is the leading expert in the issues involving mid-major scheduling,” said Forbes, whose team led the Southern Conference with 71,000 fans attending games in Freedom Hall last season, which is the most for the program since the early 1990s. “By joining his scheduling alliance, we are giving our program the opportunity to improve the profile of our non-conference schedule and provide our fans with quality home games. The landscape of scheduling at the mid-major level is changing, by joining Mark’s scheduling alliance we are being progressive in our efforts to stay ahead of these changes. Scheduling quality road games has never been an issue, but getting quality home games is a major problem for us and we are exploring any and all options to improve this situation.”

Forbes said changes to scheduling philosophy around the country – such as power conferences adding more league games and proposed alterations to the current multiple-team event (MTE) format – have made it imperative for mid-major programs to take action.

“Several leagues across the country are adding two more conference games to their schedules and the current MTE model may soon be changing,” Forbes added. “The addition of more conference games will reduce the total number of non-conference games available to schedule, and the impending MTE changes could possibly end our ability to play two home games by hosting the mainland portion of an MTE as we are this year with the Cayman Island Classic.

“Ultimately, I’m hopeful that mid-major programs across the country will align to play each other in more home and home series. These games will raise the profile of our leagues and give our fans the opportunity to see better games at home.”

"We welcome Coach Forbes and the ETSU Buccaneers to The Alliance," said Adams. "We are fighting against the current status quo in college basketball where mid-level teams who are successful – like Coach Forbes and ETSU – are basically denied access to quality games. This scheduling strategy is designed to provide greater access to metric-friendly games versus other great programs with similar challenges. ETSU is a slam dunk new alliance member and I am excited to work with the Buccaneers and their fans!"

According to Adams, the following are features and benefits of The Alliance, along with a future vision for the venture:

Benefits of the Alliance:

For more on ETSU men’s basketball throughout the 2018-19 preseason, visit ETSUBucs.com and click on the men’s hoops link.