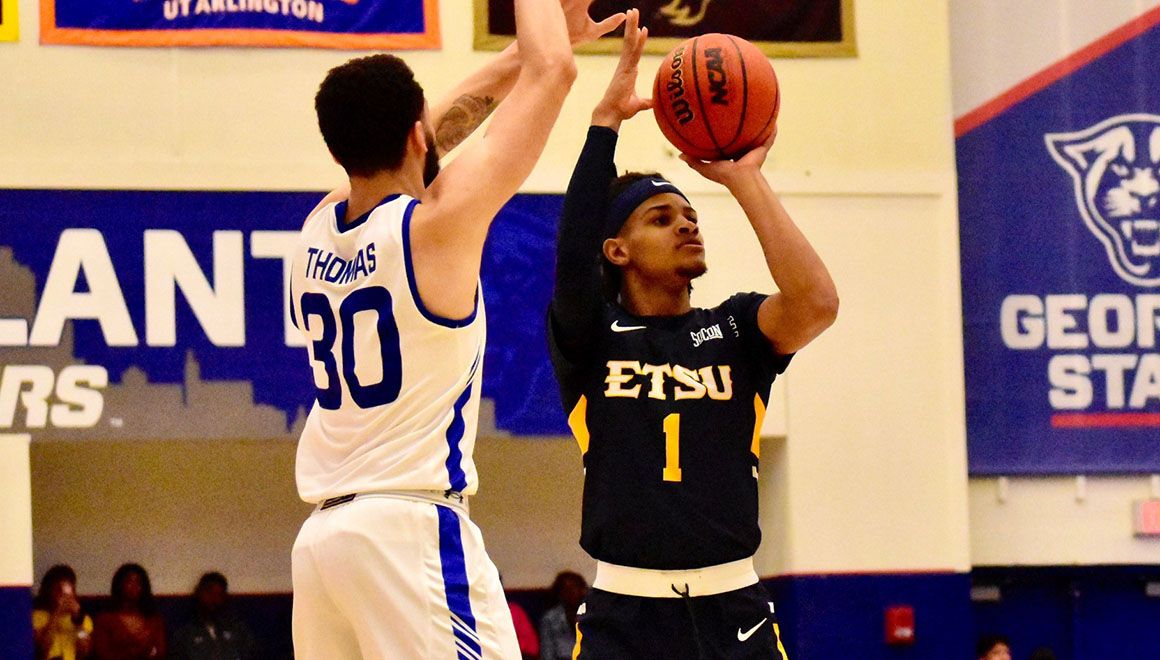 ATLANTA (Nov. 6, 2018) – Facing the defending Sun Belt Conference champion Georgia State in their season opener, the ETSU Buccaneers found themselves trailing by only one point with just over a minute left.

Unfortunately, the decisive bounce of the game didn’t go the way of the Buccaneers.

After a missed shot, Georgia State’s Damon Wilson collected an offensive rebound and seconds later connected on what became a game-deciding 3-pointer with 50 seconds left, giving the Panthers a 74-68 non-conference win over the Bucs in men’s basketball action Tuesday night inside the GSU Sports Arena.

“We had the game going our direction three of four minutes before that play and we didn’t execute down the stretch,” said ETSU head coach Steve Forbes, whose team actually used a 17-6 offensive run to lead 56-52 with 7:44 left in the contest. “That let them back in it. At the end, we got a defensive stop but didn’t get the rebound. That allowed their guy to hit that shot.”

Despite the loss, there were positives for the Bucs, who entered this 2018-19 season with 10 new faces on their roster. ETSU out-rebounded the Panthers 49-39 overall and an impressive 27-15 on the offensive class, but as Forbes pointed out in his post-game comments, many of those rebounds came about because the Bucs shot just 35.1 percent from the floor for the game. In addition, the Bucs had 12 assists compared to nine for Georgia State, and outscored the Panthers 42-24 in the paint.

In the first half, both teams struggled to score efficiently, with the Bucs shooting just 31 percent from the floor and the Panthers hitting on a 30 percent clip. The result was a tightly-contested game in the opening 20 minutes, with ETSU’s largest lead at 13-11 and Georgia State holding a 32-29 advantage at the break.

After the intermission, the Bucs fell behind by as many as seven points at 46-39 with 16 minutes left in the game, but from there ETSU put together its 17-6 run to lead 56-52. The Panthers would regroup and regain a 66-58 advantage with 3:46 before the Bucs rallied back to make it 69-68 just before Wilson’s decisive 3-pointer.

The Bucs will return to Johnson City for their home opener on Thursday night, taking on Hiwassee College at 7 p.m. inside Freedom Hall. For more on ETSU men’s basketball throughout the 2018-19 season, visit ETSUBucs.com and click on the men’s hoops link.