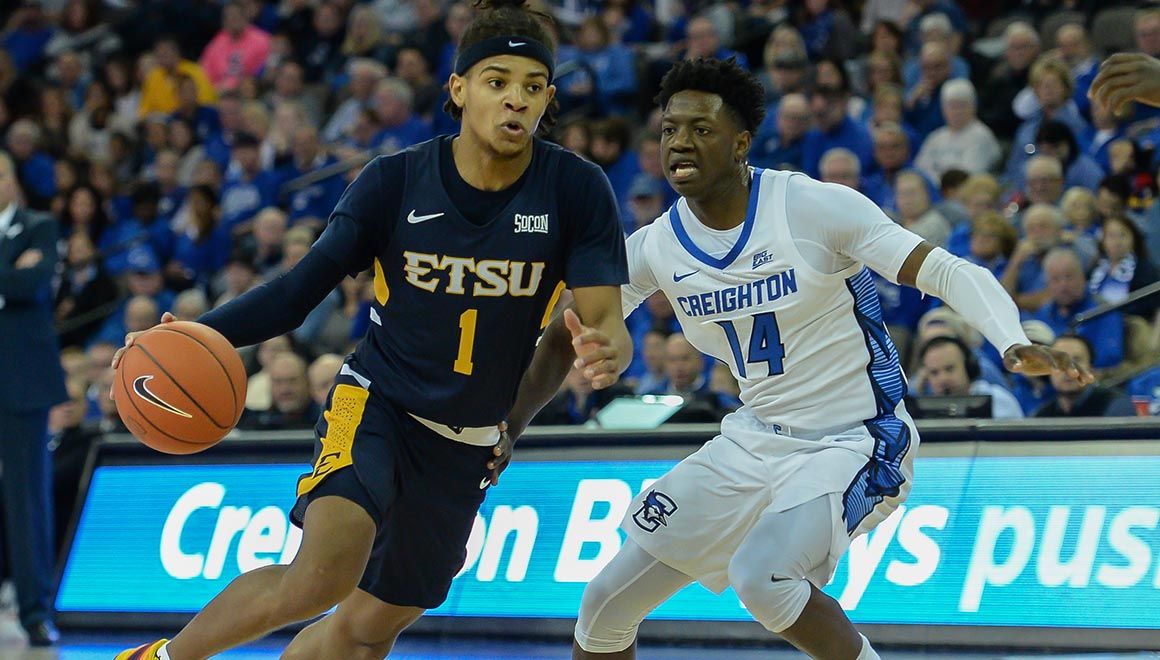 OMAHA, Neb. (Nov. 11, 2018) – Leading by 12 with 7:19 left in regulation, the ETSU men’s basketball team appeared poised to take down yet another power-conference team in an early-season matchup. This time, the Big East Conference’s Creighton looked to be the victim.

Unfortunately for the Bucs, the Bluejays had other ideas. Rallying to score on 12 of their final 13 possessions and putting together a 24-6 run to close the game, Creighton roared back to take a 75-69 win over the Buccaneers Sunday afternoon inside the CHI Health Center Omaha.

With the loss, ETSU dropped to 1-2 on the season, while Creighton improved to 2-0.

“We’re very disappointed because for the majority of the game we controlled it,” said ETSU head coach Steve Forbes. “When we were up 12 and coming out of a timeout, I told our guys we needed three stops for a chance to win. Instead, I think they scored 10 times in a row. We just didn’t execute and lost our composure on the defensive end. There are plenty of things we’ve got to work on, but I can’t fault the effort of our guys. They played hard, but we just have to execute better down the stretch.”

Statistically, the Bucs certainly looked the part of a winner in many respects. Out-rebounding the Bluejays 40-22 on the night – including a 19-3 edge in offensive rebounds – the Bucs also outscored Creighton 16-4 on second chance points. Individually, junior post Jeromy Rodriguez (Santiago, Dominican Republic) led the way with a double-double effort of 15 points and 14 rebounds, while sophomore guard Patrick Good (Johnson City) scored 18 points and junior guard Tray Boyd III (Memphis) netted a game high 20 on 9-of-18 shooting from the floor.

As Forbes noted, the Bucs played well defensively for 33 of the game’s 40 minutes. However, in the final minutes the Bluejays would connect on four 3-pointers to power their rally. In the end, Creighton was 6-of-8 (75 percent) from beyond the arc and 15-of-24 (62.5 percent) from the field in the second half. For the game, the Bluejays shot 54 percent from the field and 60 percent from beyond the arc.

In the first half, the Bucs served notice that they would not be intimidated by their opponents from the Big East. After Creighton scored the first basket of the game, ETSU responded with seven straight points of their own and held the lead for much of the first 20 minutes of play. After the break, the Bucs made their most impressive run with 12 minutes left thanks to Boyd and Good. Boyd would score 11 straight points before back-to-back 3-pointers from Good made it 63-51.

The Bucs will remain on the road for their next game, heading to Rock Hill, S.C., to take on traditional Big South Conference power Winthrop on Saturday, Nov. 17 at 2:30 p.m. For more on ETSU men’s basketball throughout the 2018-19 season, visit ETSUBucs.com and click on the men’s hoops link.