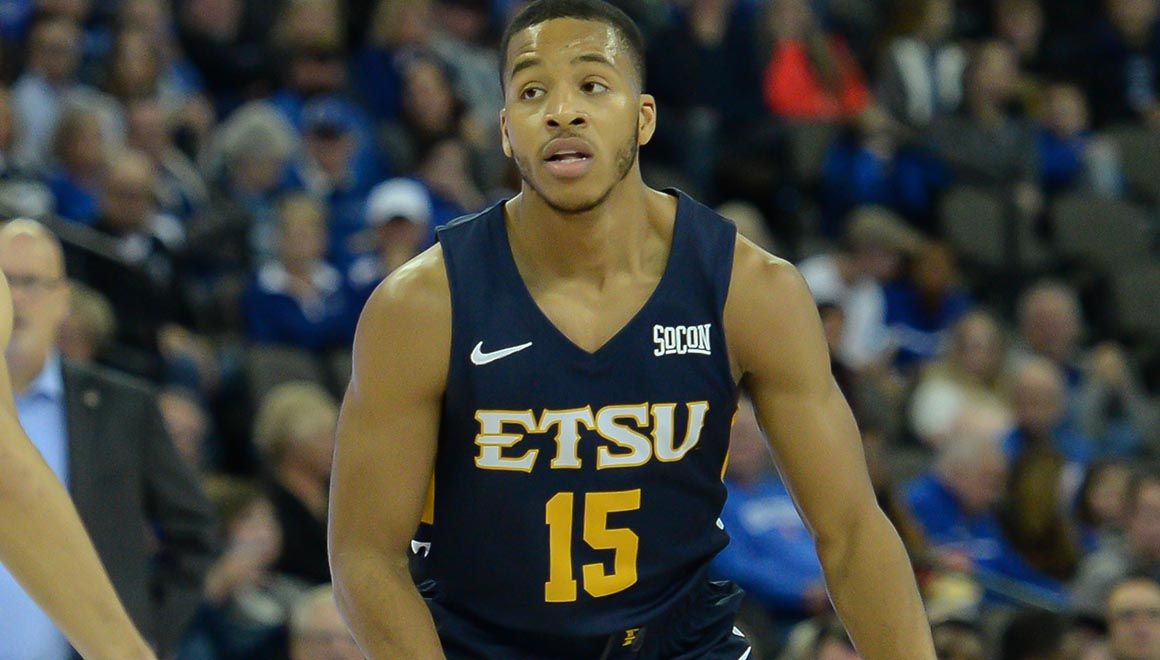 After watching opponents rally for wins in two of their first three games this season, the Buccaneers were the team to overcome a seven-point deficit with just 3:41 left in regulation to take a dramatic and hard fought 76-74 win over traditional Big South Conference contender Winthrop inside the Winthrop Coliseum. With the win, the Bucs improved to 2-2 on the season, while the Eagles dropped to 2-2.

With the Eagles leading 71-64, the Bucs manufactured a 12-3 offensive run to end the game, a surge that was sparked initially by sophomore guard Patrick Good (Johnson City) with a pair of 3-pointers. Then, a steal by junior guard Isaiah Tisdale (Lexington, Ky.) with Winthrop leading by one and 21 seconds left led to the go-ahead score by junior post Jeromy Rodriguez (Santiago, Dominican Republic), making it 75-74.

The Bucs still needed two more defensive stops after Rodriguez’s score, and when a 3-pointer by Winthrop’s Kyle Zunick banked harmlessly off the rim at the buzzer, the Bucs had secured their first road win of the year.

“We found a way to win by getting stops and diving on a 50/50 ball when the game was on the line,” said ETSU head coach Steve Forbes, referring to one of the final two defensive stops that led to the Bucs diving on a loose ball to gain possession. “We were resilient for 40 minutes through our highs and lows. We were really good defensively in the first half but did not guard with the same purpose in the second half away from our bench.”

For the game, Tisdale led the way with a team high 17 points, while Kevon Tucker (Dacula, Ga.) came off the bench to score 16 and Good finished with 14. Rodriguez had a game high 13 rebounds, while sophomore post Mladen Armus (Belgrade, Serbia) collected 11 boards. Freshman guard Daivien Williamson (Winston-Salem, N.C.) also provided some clutch plays down the stretch, finishing with nine points on the night. As a team, the Bucs out-rebounded Winthrop 42-28 and forced 20 turnovers, collecting nine steals along the way. Winthrop was paced by a game high 26 points from Nych Smith, while Josh Ferguson netted 14.

In a game that featured offensive runs by both teams, the Bucs opened the first half by pulling ahead by eight at 15-7. While Winthrop methodically worked back into the game and took the lead at 24-19, ETSU regrouped and finished the half with a 35-30 advantage.

After the break, both teams traded the lead for most of the second half before the Eagles used a 9-0 run to take their 71-64 lead late in the contest. From there, the Bucs outscored Winthrop 12-3 to end the game.

The Bucs return home for three straight games next week inside Freedom Hall, beginning with a 7 p.m. matchup Monday night against Chicago State in the mainland portion of the Cayman Island Classic. For more on ETSU men’s basketball throughout the 2018-19 season, visit ETSUBucs.com and click on the men’s hoops link.