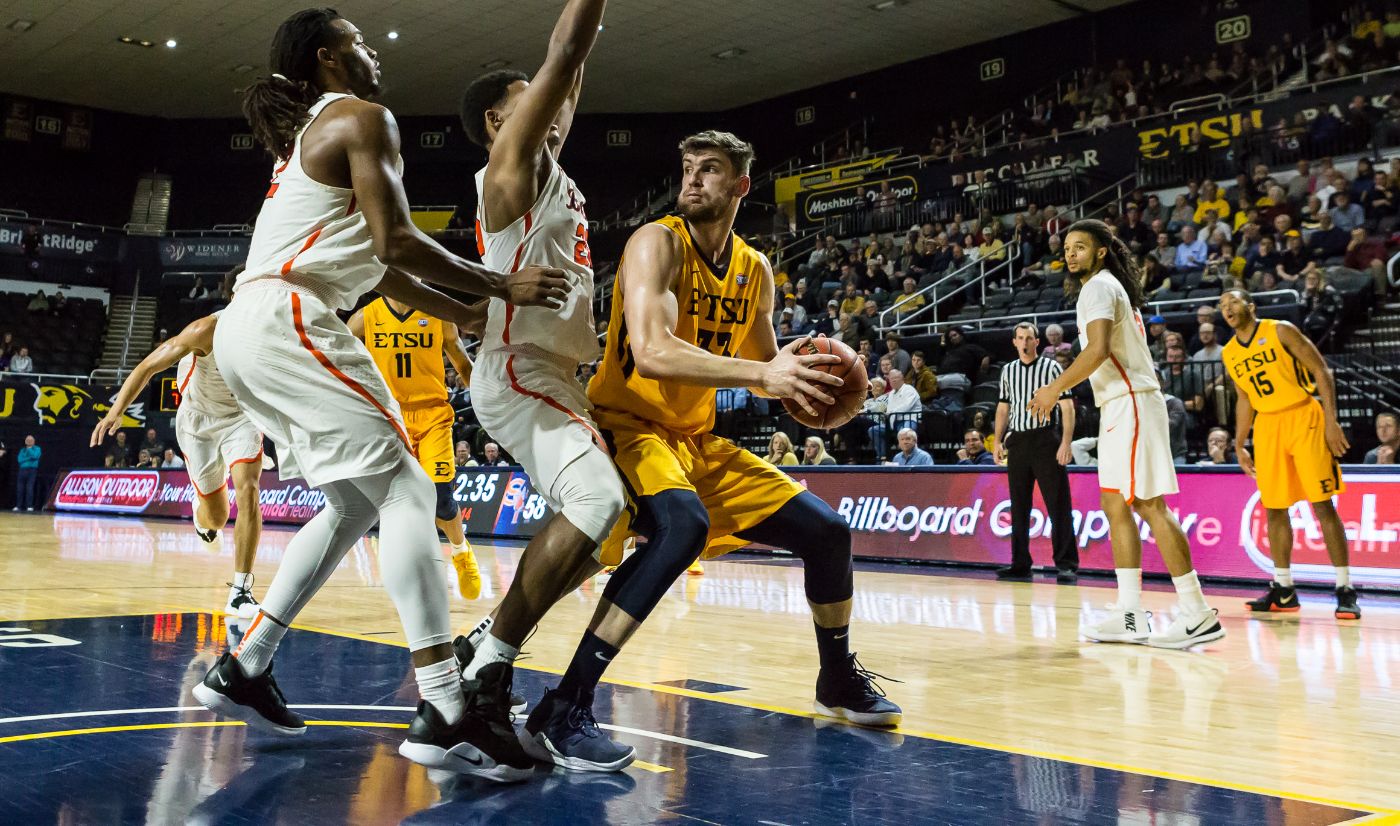 After watching Sam Houston State shoot over 50 percent in the first half and lead by as many as 18 points in the opening 20 minutes of play, the ETSU men’s basketball team matched that effort by shooting 64 percent in the second half and raced past the Bearkats 77-63 in the winner’s bracket final of the Cayman Island Classic Mainland Tuesday night inside Freedom Hall.

With the non-conference win, the Bucs improved to 4-2 on the season, while Sam Houston State dropped to 3-4.

“I’m not sure I’ve ever been part of a game like that – to be down 18 and then be up by 17 like we were there at the end,” said ETSU head coach Steve Forbes, whose team has now won three straight contests. “We just have to be more aggressive at the start of games, and I let our guys know that. I have a lot of respect for that team and their program, and they came out and whipped us in the first half. In the second half, we finally got going and got the crowd into it, and that made a huge difference.”

The Bucs enjoyed a trio of strong individual performances, including a game high 23 points from junior guard Tray Boyd III (Memphis), while junior forward Jeromy Rodriguez (Santiago, Dominican Republic) collected his fourth double-double in six games this season by netting 11 points and grabbing 12 rebounds. Along with that duo, sophomore forward Mladen Armus (Belgrade, Serbia) took over the game at different points in the second half, finishing the night with 17 points and nine rebounds.

The first half certainly did not go well for the Bucs, as the Bearkats led by as many as 18 points. While Sam Houston State shot 52 percent from the field and 50 percent from 3-point range in the opening 20 minutes, the Bucs struggled to find their range or rhythm offensively, and trailed 40-22 with 7:09 left before the break. ETSU did manage to close the half with a 5-0 run to make it 42-29 at the break.

After the intermission, the Bucs wasted no time getting back into the game, putting together several defensive stops and then outscoring the Bearkats 26-7 over the first eight minutes of the half to take the lead 55-49. Connecting on seven 3-pointers in the second half, the Bucs kept piling on the points and ultimately led by 17 at 77-60 before Sam Houston State hit a meaningless three in the final seconds.

The Bucs will remain home for the third of three-straight games inside Freedom Hall when they host North Dakota State on Saturday at 4 p.m. For more on ETSU men’s basketball throughout the 2018-19 season, visit ETSUBucs.com and click on the men’s hoops link.