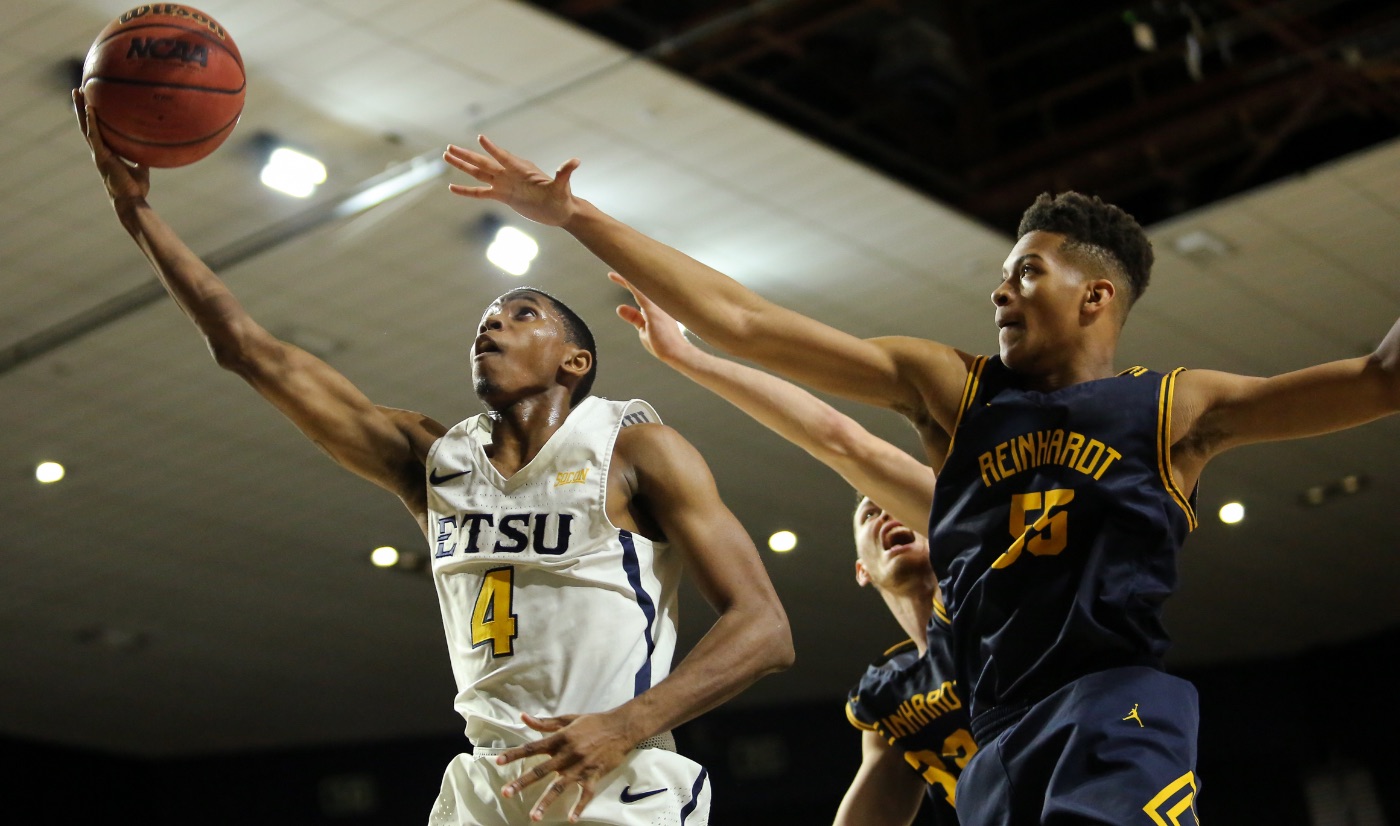 JOHNSON CITY, Tenn. (Dec. 3, 2018) -- For the second time this season, the ETSU men’s basketball team enjoyed a wire-to-wire win, as the Buccaneers rolled past Reinhardt, 107-60, on Monday night inside Freedom Hall.

Five Buccaneers scored in double figures, including junior forward Jeromy Rodriguez (Santiago, Dominican Republic) and freshman Daivien Williamson (Winston-Salem, N.C.) using game-high 17-point efforts. Rodriguez recorded his fifth double-double of the season as he also pulled down 13 rebounds, while Williamson – who finished with a season high in scoring – went 8-for-8 from the free throw line. Williamson also dished out five assists and grabbed six rebounds. Senior forward James Harrison (Dallas, Texas) scored a career-high 15 points and grabbed nine rebounds, while Mladen Armus (Belgrade, Serbia) and Tray Boyd III (Memphis, Tenn.) both netted 13 points. In total, all 11 players who saw the court reached the scoring column, including freshman guard Myles Rasnick (Knoxville, Tenn.) igniting the crowd with back-to-back three-pointers late in the second half to push the Blue and Gold past the century mark for the second time this season.

As a team, the Bucs – who were without the services of head coach Steve Forbes as he was serving a one-game suspension after being ejected from last Saturday’s Wofford game – shot 55 percent (33-60), including a blistering 70 percent in the second half (19-27). ETSU also shot 82 percent from the free throw line (32-39). The Blue and Gold totaled 44 points in the paint, turned 15 offensive rebounds into 20 second-chance points and received 49 points from their bench. ETSU grabbed 64 rebounds, which are the most since at least the 2001-02 season, while tying for the seventh-most by a Division I team this year. The 64 boards are also the eight-most by a SoCon team, besting the 63 ETSU totaled against UVA Wise on Nov. 18, 2014. The Bucs were plus-38 in rebound margin tonight.

After having their five-game win streak snapped last Saturday, ETSU quickly stormed out of the gates as the Bucs opened on a 16-2 run to start the first five minutes and never looked back. The Bucs’ lead grew to 21 when Isaiah Tisdale (Lexington, Ky.) connected on one of his two three-pointers of the night at the 6:20 mark – and after Eagles pulled within 14 with 2:35 left in the half – ETSU closed the final minutes on an 11-0 run to take a 25-point lead into the break, 52-27.

The Blue and Gold hit five threes and made 19 of their 22 free throw attempts in the opening 20 minutes, while holding Reinhardt to 26 percent shooting (10-39) and 2-of-18 from beyond the arc. Rodriguez led all players with nine points at the half, while Williamson and Boyd III each had eight.

ETSU continued its hot shooting to start the second half as the Bucs hit on six of their first seven attempts and led 67-41 with 13:12 remaining in the contest. The Blue and Gold continued shooting 80 percent for the half (12-15) and Boyd’s three-pointer made it an 81-48 score with just over eight and a half minutes to play. ETSU’s lead hit the 40-point threshold courtesy of the first three by Rasnick and the largest margin was held at 48 when a lay-up by Williamson made it 104-56 with 58 seconds left on the clock.

Reinhardt was led by Chris Rogers and Reginald Terrell as they each scored nine points. The Eagles shot 26 percent on the night (19-73) – the lowest by a Buccaneer opponent this season and lowest mark since holding Milligan to 24.6 percent (15-61) back on Dec. 9, 2006.

ETSU wraps up its brief two-game homestand Saturday afternoon when the Bucs take on UT Martin. Tip is set for 4 p.m. inside Freedom Hall.