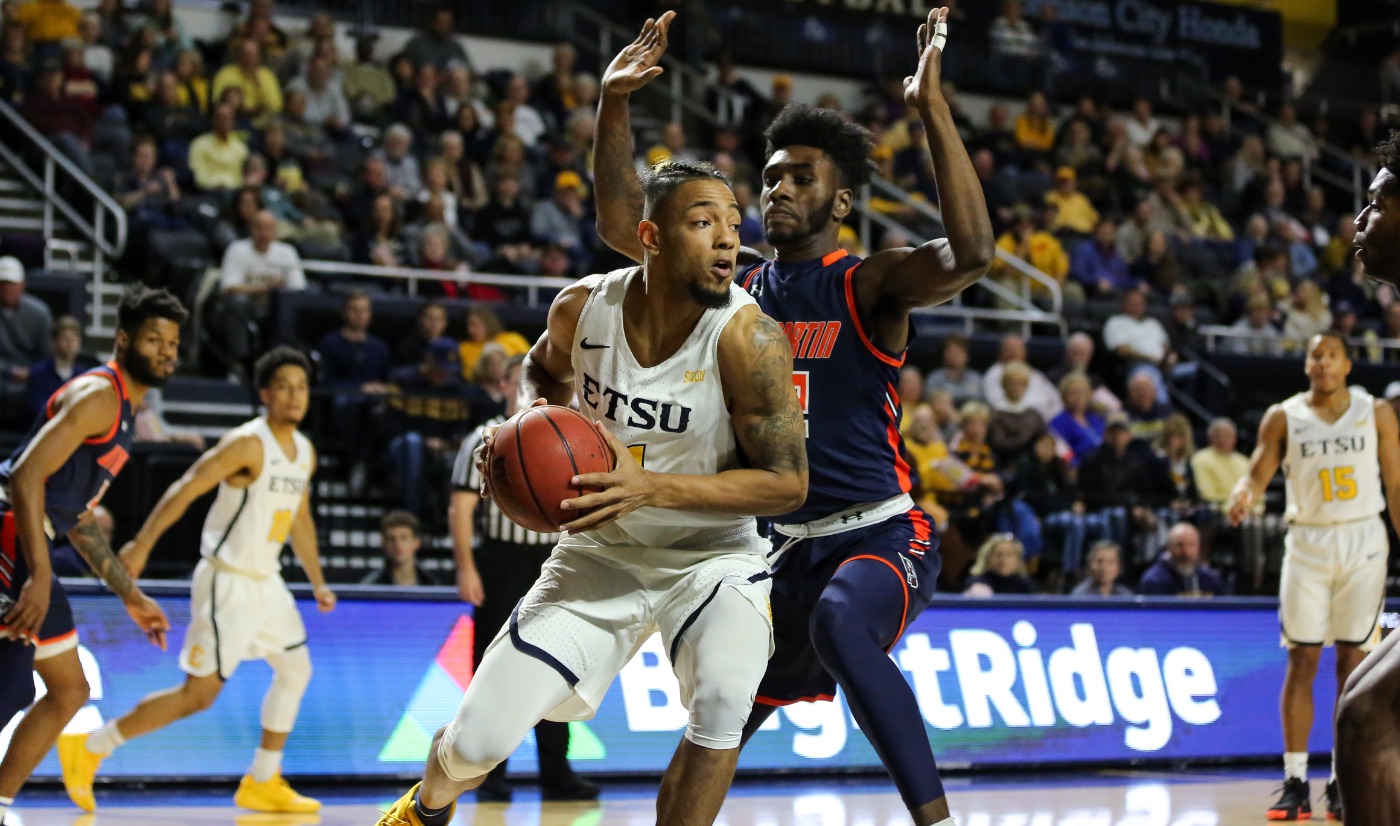 Trailing by as many as eight points in the second half and down 53-51 with 10:45 remaining, the Buccaneers caught fire down the stretch. D’Andre Bernard’s (Toronto, Canada) three-pointer ignited the surge as it put ETSU ahead by one and the Blue and Gold never looked back.

Rodriguez, who posted his team-leading sixth double-double of the season, set a new career high for points scored, while junior guard Tray Boyd III (Memphis, Tenn.)enjoyed his 20th birthday as he poured in 20 points, five rebounds and three assists in 30 minutes off the bench. Sophomore forward Mladen Armus (Belgrade, Serbia) stuffed the stat sheet as he totaled 10 points, eight rebounds and a career high six assists, while sophomore guard Patrick Good (Johnson City, Tenn.) added 14 points. Boyd (five threes) and Good (four threes) combined for nine of the 10 three-pointers, which tied a season high for the Blue and Gold.

The Bucs outscored the Skyhawks by 23 in the second half (47-24), while knocking down seven of their 10 made three-pointers in the final 20 minutes. Overall, ETSU assisted on 21 of its 31 made field goals, while shooting over 50 percent for the second straight contest. The Bucs finished at 51 percent, while limiting UT Martin to 35 percent shooting. The Blue and Gold tallied half of their points in the paint and were plus-16 in rebounding, 45 to 29.

The first half was nip and tuck as the teams combined for eight ties and six lead changes, and the Skyhawks took a 38-33 lead into the locker room. UT Martin scored the first five points of the contest before the Blue and Gold responded with a 10-2 run to go ahead 10-7 following a lay-up by Rodriguez at the 16:51 mark. From there the game remained tight, but with ETSU ahead 27-25, the Skyhawks mounted an 11-2 run to take their largest lead of the half, 36-29 with just under three minutes to go before intermission.

ETSU shot 44 percent in the first half (14-32), compared to UT Martin posting a 38 percent clip (13-34). Foul trouble caused the Blue and Gold issues in the opening 20 minutes as four of their starters picked up two fouls and the Skyhawks were plus-8 at the free throw line – going 10-of-13 to ETSU’s 2-of-6 mark. Boyd led the Blue and Gold with eight first-half points, while Rodriguez added six points and seven rebounds.

UT Martin saw its second-half lead increase to eight points on two separate possessions, but the Bucs stayed the course and used long distance shooting to chip away at their deficit. With the Skyhawks leading 44-36 with 18:07 remaining in the contest, Boyd drained two threes over a two-minute stretch to pull ETSU within two, while Good’s third three-pointer of the night gave the Blue and Gold a 49-48 lead with just under 12 minutes to play.

From there, the lead went back-and-forth over the next couple possessions, but Bernard’s three-pointer from the corner with 10:25 left in the contest put ETSU ahead for good, 54-53. The bucket sparked an 11-0 run and the Bucs took their first double-digit lead of the night when Armus fed Boyd for a lay-up to make it 66-55 with 5:49 showing on the clock. UT Martin pulled within nine but ETSU doubled up them up in the final five and half minutes to pull away for the 18-point win.

Preston Parks scored a team-high 20 points for UT Martin, while Quintin Dove added 18 points and four rebounds. The Skyhawks finished 15-of-18 at the free throw line compared to the Bucs going 8-of-15, but ETSU doubled up the visitors from beyond the arc, 10 to 5. In total, the Skyhawks were 5-of-24 from three.