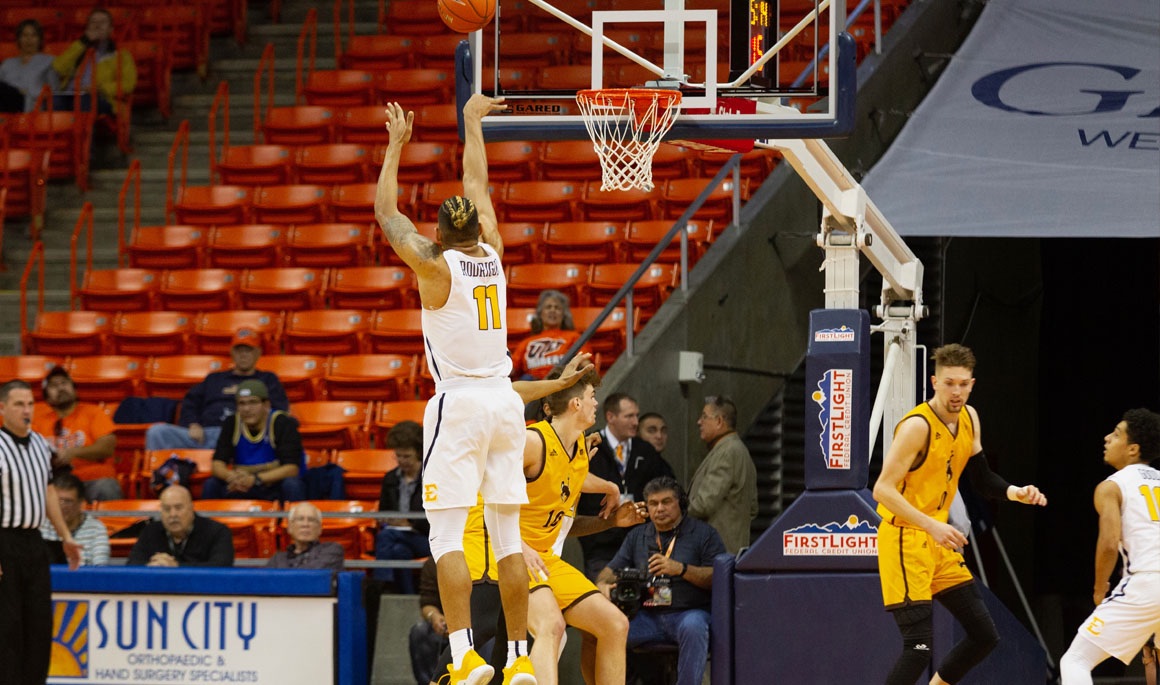 ETSU holds Cowboys to one first-half field goal, marking only the second time since 1986 that it has occurred in NCAA history

EL PASO, Texas (Dec. 21, 2018) -- Thanks to the combination of a strong start and solid defense, the ETSU men’s basketball team defeated Wyoming 76-53 on Friday night from the Sun Bowl Invitational inside the Don Haskins Center.

The Buccaneer defense reached historic heights in the first half as they held Wyoming to one made field goal (26 attempts), which according to the NCAA record book, is only the second time since 1986 where a team has accomplished the feat. Kansas State held Savannah State to one make (23 attempts) back on Jan. 7, 2008. Wyoming’s 3.8 shooting percentage was also the lowest in a half since 1986 as Kansas State limited Savannah State to 4.3 percent.

As a team, ETSU, who shot 53 percent in the first half (18-34), finished with a 46 percent clip on the night (31-68), while outscoring the Cowboys 52-12 in the paint and generating 27 bench points. The Blue and Gold turned 14 offensive rebounds into 16 second-chance points and forced Wyoming – one of the national leaders in fewest turnovers – to cough the ball up a season-high 23 times. ETSU cashed those miscues into 27 points.

With the win, ETSU earned its first-ever victory over Wyoming and moved to 9-4 on the season, while the Cowboys dipped to 3-8.

ETSU scored the first 10 points of the contest and eventually led 24-1 after Hodges converted on an and-one at the 11:06 mark. The Cowboys eventually registered their only field goal when Jake Hendricks hit a three-pointer with 10:32 left in the frame and were held to single digits until the 2:23 mark when Tariq Johnson made a pair of free throws to make it 41-10. The Blue and Gold extended their margin to 33 and held Wyoming to the fewest points by a Buccaneer team since limiting Western Carolina to 12 back on Feb. 25, 2017.

After missing 25 of its 26 shots in the first half, Wyoming heated up in the second as they started the first seven minutes on a 22-8 run to cut its deficit to 18, 51-33. Hunter Thompson ignited the run as he hit four threes during the spurt and eventually made his first seven triples, which made it an 11-point contest at 59-48 with 7:36 remaining.

The Bucs then turned to the three ball to stop the surge as Kevon Tucker (Dacula, Ga.) and Good hit back-to-back from beyond the arc, making it 65-48 with 6:05 showing on the clock. The back-to-back threes proved to be the dagger as Wyoming never inched closer and ETSU secured the non-conference win.

Wyoming’s Justin James entered the night averaging 24.5 points and was held to eight points on 3-of-21 shooting, while Thompson scored a game-high 25 points on 7-of-8 shooting from three. The Cowboys made 15 field goals in the second half and finished the game 16-of-52 (31 percent), while they were outrebounded, 48 to 34.

The Bucs will now face the winner of UTEP-Norfolk State in the championship game on Saturday night at 9 p.m. ET.