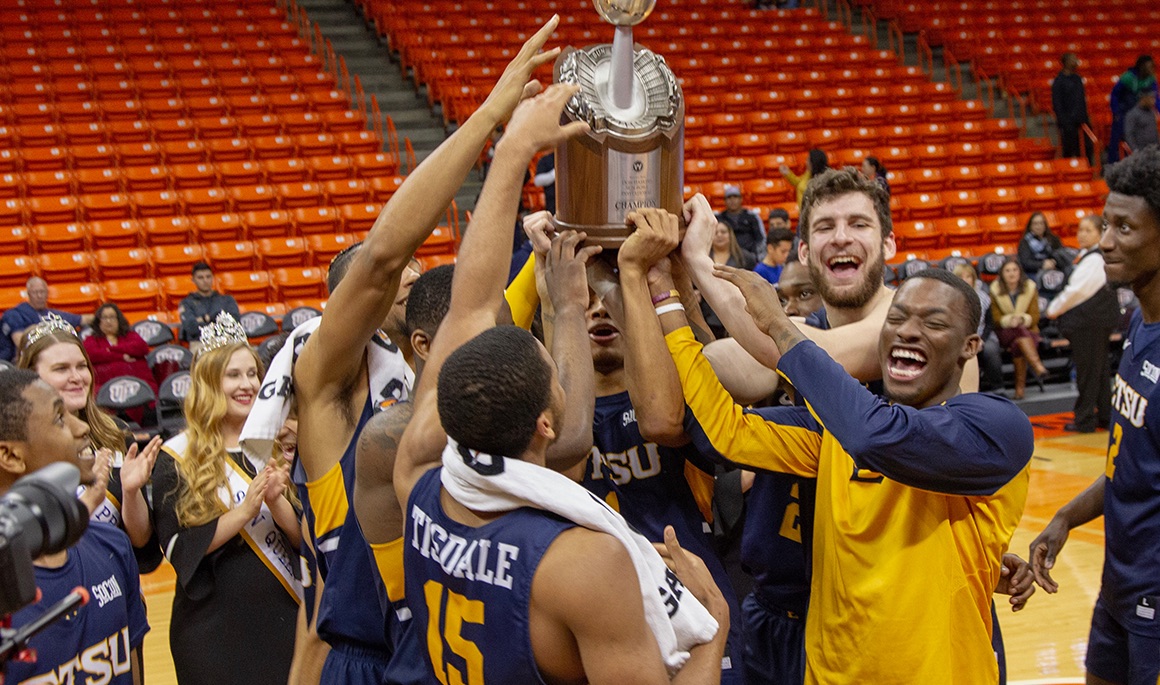 The Buccaneers never trailed in their two games of the Don Haskins Sun Bowl Invitational en route to claiming the tournament championship with an 89-61 win over Norfolk State on Saturday night from the Haskins Center. ETSU joined a list of 25 teams to win the prestigious tournament and the 17th to claim the title in its first appearance.

A night after using a defensive effort where they held Wyoming to one made field goal in the opening 20 minutes, the Blue and Gold used pin-point outside shooting to build a double-digit lead midway through the first half – one they wouldn’t see dip below that threshold for the remainder of the night. The 28-point win was the largest margin since 2002 when UAB defeated Columbia by 29, 71-42.

ETSU, who hit eight of its first nine three-point attempts of the contest, was led by junior guard Tray Boyd III (Memphis, Tenn.) as he rolled in a career-high 24 points in just 17 minutes of action. Boyd drained six of the Bucs’ season-high 12 made threes, while guards Bo Hodges (Nashville, Tenn.) and Daivien Williamson (Winston-Salem, N.C.) combined for 29 points, eight rebounds and six assists. Hodges was named the Tournament MVP and Williamson also landed a spot on the all-tournament team.

ETSU won its second straight game and improved to 10-4 on the season, while Norfolk State moved to 5-9. The Bucs enjoyed their fourth wire-to-wire win this season en route to posting non-conference win number 10.

The Bucs made a statement early as they opened on a 10-4 run start in the first two minutes and forced Norfolk State to burn a quick timeout. After the Spartans pulled within three out of the timeout, ETSU mounted a 13-2 run to go ahead 23-9 thanks to Boyd connecting on his second three of the night with 13:07 remaining in the half.

Norfolk State managed to inch within nine points on two separate possessions, but with the score at 26-17, the Blue and Gold used another spurt as they scored 12 of the next 14 points over three-minute stretch to build a 19 point lead, 38-19 when Boyd netted his fourth trey of the half at the 7:08 mark. The margin remained in double figures and the Blue and Gold took a 15-point lead into the break, 45-30.

For the half, ETSU shot 57 percent (16-28) and made eight of its 12 three-point attempts, while Williamson (13 points) and Boyd (12 points) accounted for 25 of the Bucs’ 45 points. The Bucs made solid work of the Spartans’ miscues as they cashed Norfolk State’s nine turnovers into 17 points.

In the second half, ETSU quickly saw its lead grow to 20 when Boyd’s jumper made it 56-36 with 16:46 showing on the clock. The lead extended to 26 at 69-43 on Isaiah Tisdale’s (Lexington, Ky.) jumper at the 8:06 mark and a few minutes later the Bucs took their largest margin of the night, 77-46 with 5:27 left in the contest. The lead once again hit 31 on Tisdale’s steal and slam with just over a minute in the contest and Myles Rasnick (Knoxville, Tenn.) got in on the fun by knocking down his fourth three-pointer of the season as he hit the bottom of the net right in front of the Bucs’ bench in the closing seconds.

Norfolk State, who reached the tournament final after defeating host UTEP on Friday night, shot 39 percent (19-49) and hit 10 threes on the night.

The Spartans were led by Derrik Jamerson as he scored a team-high 20 points on 7-of-11 shooting.

The Bucs wrapped up non-conference play and will now turn their attention back to Southern Conference action when ETSU hosts Furman on Saturday, Dec. 29. Tipoff is set for 4 p.m. inside Freedom Hall.