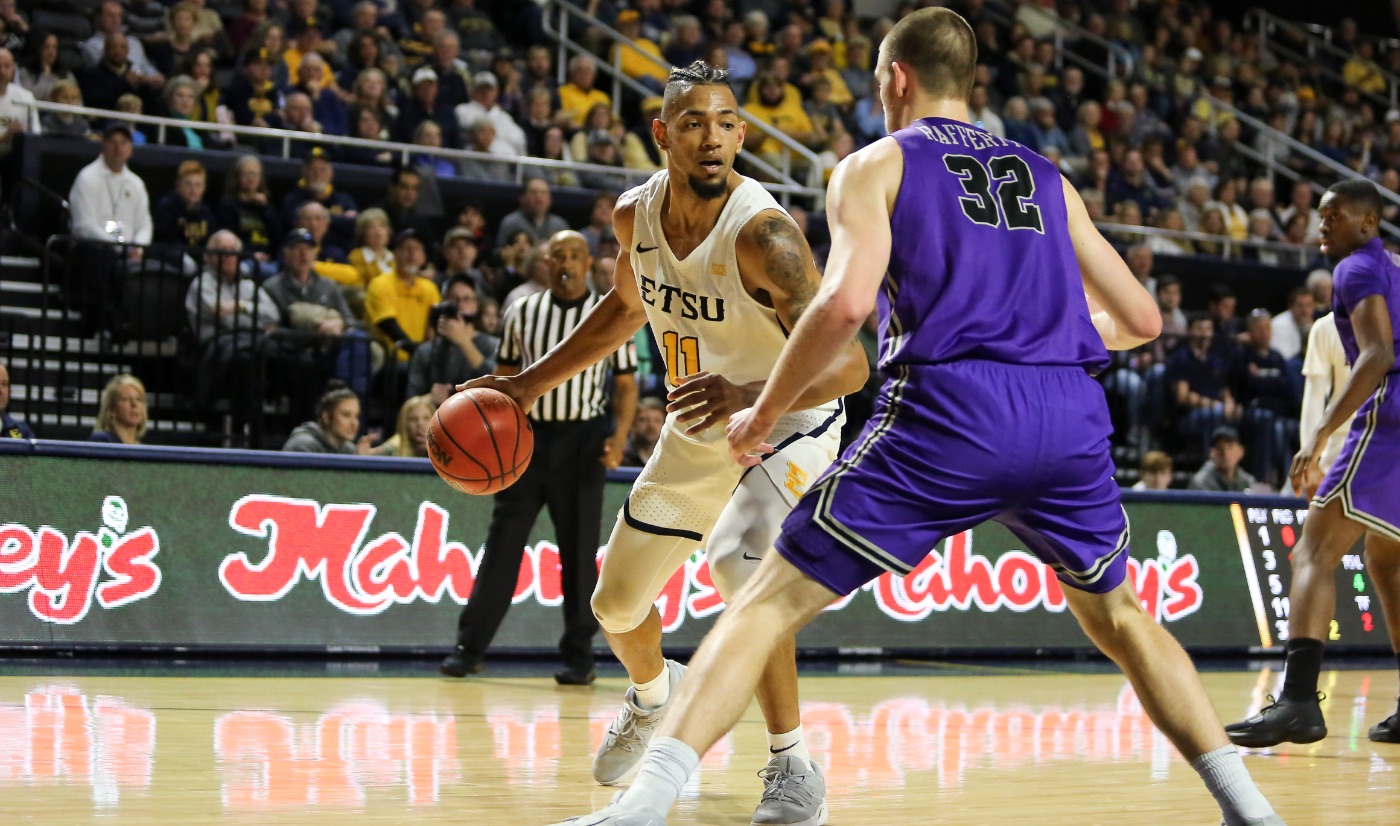 Highlighted by four players scoring in double figures and displaying one of its best defensive performances of the season, ETSU men’s basketball routed Furman 79-56 in front of 5,439 fans on Saturday evening inside Freedom Hall.

Junior forward Jeromy Rodriguez (Santiago, Dominican Republic) led the Blue and Gold with his eighth double-double of the year as he totaled 19 points (8-of-10 shooting) and 11 rebounds, while fellow post Lucas N’Guessan (De Lier, Netherlands) added a career-high 13 points, five rebounds and three blocks in his first game inside Freedom Hall. Freshman guard Daivien Williamson (Winston-Salem, N.C.) made his third straight start and finished with 13 points and three assists (zero turnovers), and sophomore guard Patrick Good (Johnson City, Tenn.) knocked down four of the Bucs’ seven three-pointers to finish with 12 points. Good also dished out four assists and did not have a turnover.

Collectively, the Bucs shot over 50 percent for the third consecutive game as they finished with a 60 percent clip (30-50) and assisted on 18 of those makes. ETSU held Furman to a season-low 56 points, which was 25 below its average. The Paladins shot 37 percent (20-54) and made only five of their 22 attempts from beyond the arc. The Bucs generated 42 points in the paint and outscored Furman 13-0 in transition scoring.

The Bucs got off to strong start as they made seven of their first nine shots, and with ETSU leading 15-14 with 10:08 remaining in the first half, the Blue and Gold locked in defensively. ETSU held Furman scoreless for the next five-plus minutes and extended its lead to eight, 22-14, when Bo Hodges (Nashville, Tenn.) scored on a lay-up at the 7:49 mark.

Furman, who only led for just over two minutes early in the game, finally stopped its scoring drought on a three-pointer by Noah Gurley with 4:42 remaining before the break, and after Jordan Lyons’ pulled the Paladins within four on their next possession, ETSU got back-to-back three-pointers by Good to go ahead, 29-19. The Bucs’ lead eventually increased to 11 and after Hodges made one of his two free throw attempts to end the half, ETSU took a 34-24 lead into the locker room.

As they did to start the game, the Blue and Gold came out firing to start the second half as they connected on six of their first seven shots and led 50-34 when Hodges found N’Guessan for a dunk with 15:19 showing on the clock.

From there, the rout was on, as the Bucs’ lead never dipped below double figures.

The Paladins tried to attempt one final run as they clipped their deficit to 12, but ETSU then sparked a 14-2 run to extend its lead to 24 after Isaiah Tisdale (Lexington, Ky.) stole a pass, drove in for a fast-break lay-up and converted on the and-one to make it 71-47 with 5:26 remaining.

ETSU’s lead remained over 20 points for the rest of the contest and eventually built a 28-point cushion, 79-51, when Mladen Armus (Belgrade, Serbia) found Rodriguez for a lay-up with just over two minutes left in the game.

The Bucs shot 67 percent in the final 20 minutes as they only missed eight shots (16-24), while Rodriguez was a perfect 5-of-5 with 13 points in the stanza. Williamson added 10 of ETSU’s 45 second-half points, while the Blue and Gold went 10-of-11 at the free throw line in the frame.

Furman had three players score in double figures as Matt Rafferty scored a team-high 19 points on 8-of-13 shooting. Jordan Lyons netted 12 points and Gurley added 10 off the bench.

The Bucs continue their homestand Thursday night when ETSU hosts Samford at 7 p.m.