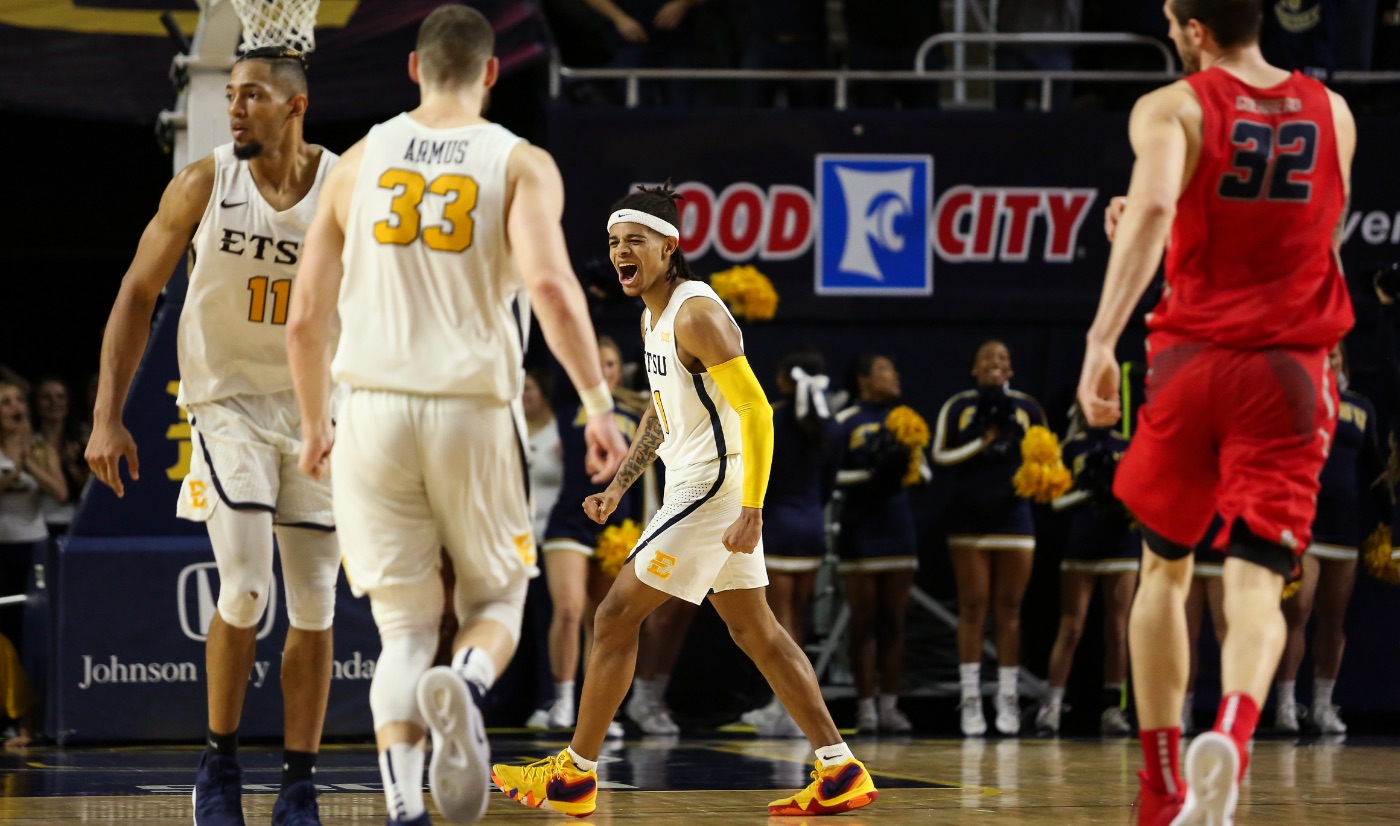 Junior guard Tray Boyd III celebrates after knocking down a three-pointer to put the Bucs up 77-72 with 1:05 remaining in overtime.
ETSU remains perfect at home with overtime win against Samford
Samford at ETSU | January 03, 2019
Related Links

JOHNSON CITY, Tenn. (Jan. 3, 2019)– Despite leading by 17 points in the second half, the ETSU men’s basketball team needed extra time to hold off a stingy Samford squad.

After seeing the Bulldogs close the final four minutes of regulation on a 10-1 run to force overtime and go ahead 72-70 in the early stages of the extra stanza, the Buccaneers scored the final 11 points to pull out an 81-72 win over Samford on Thursday night inside Freedom Hall.

The Bucs remained perfect at home thanks to the strong inside play from Jeromy Rodriguez (Santiago, Dominican Republic) and Mladen Armus (Belgrade, Serbia), along with clutch shooting late by junior guard Tray Boyd III (Memphis, Tenn.).

Rodriguez and Armus combined for 23 points and 36 rebounds, while Boyd scored seven of his game-high 22 points in overtime as ETSU improved to 8-0 at home this season and 6-0 in overtime games under head coach Steve Forbes. Rodriguez recorded his SoCon-leading ninth double-double after finishing with 12 points, a career-high 19 rebounds, three assists, three steals and two blocks, while Armus added his third of the season – posting 11 points and a career-high 17 rebounds. Junior guard Kevon Tucker (Dacula, Ga.) sparked the Bucs early as he scored 11 first-half points, including a trio of three-pointers.

As a team, ETSU – who had its three-game run of 20-plus point wins come to an end – shot 44 percent from the field (31-70); however, the Bucs scored 42 points in the paint, 24 off 18 Samford turnovers and 22 second-chance points (18 offensive rebounds). The Buccaneer bench also totaled 51 points, which included Boyd and Tucker combining for ETSU’s seven made three-pointers. Boyd nailed the biggest one of the night as he extended the lead to 77-72 with 1:05 remaining in overtime en route to capturing his fifth 20-point scoring performance of the season. The Bucs were plus-17 in rebounding (48 to 31), while holding the Bulldogs to seven offensive rebounds resulting in only two second-chance points. ETSU was also clutch at the free throw line late as they went 6-of-15 at the line in regulation, but hit all six attempts in the extra five minutes thanks to makes from Rodriguez, Boyd and Patrick Good (Johnson City, Tenn.).

A strong start by the Bucs gave them a 47-32 lead at the half as ETSU shot 59 percent (20-34) and closed the final five minutes on a 16-5 run to take the 15-point advantage into intermission. The game was tight early with two ties and two lead changes in the first seven and a half minutes, but with the game knotted at 14, ETSU used a brief 8-2 spurt to go up 22-16 following a three from Tucker at the 9:59 mark of the half. The Bulldogs pulled within four with 5:13 to go before the break but the Bucs used their run to grab momentum.

Following halftime, it didn’t take long for ETSU to extend its lead as jumper by Rodriguez on the Bucs’ opening possession made it 49-32; however, a shooting funk settled in for the Blue and Gold.

Despite being able to grab a nine-point lead on four separate occasions between the 8:37 mark and 4:01 remaining in regulation, ETSU was unable to put the Bulldogs away. After Rodriguez found Armus for a lay-up to make it 69-60 with four minutes to go, Samford used its late 10-1 run to tie the game at 70 following a three-pointer by Myron Gordon with 1:18 showing on the clock. Neither team scored in that final minute-plus, as the Bucs had two possessions to recapture the lead but Boyd missed a lay-up with 56 seconds left – and after Armus blocked a potential go-ahead shot by Ruben Guerrero – ETSU missed two shots in the final 10 seconds, which moved the game into overtime.

Both teams went scoreless in the first minute of extra play, but the Bulldogs took their first lead since the opening minutes of the first half when Josh Sharkey hit a pair of free throws with 3:55 left.

However, after going scoreless for nearly a four-and-a-half minute stretch between regulation and overtime, Boyd ended the drought with a lay-up to even the game at 72 with 2:29 remaining. Following a turnover by Sharkey, Rodriguez was fouled and sent to the line as he connected on both free throws to give the Blue and Gold the lead for good, while Boyd’s three-pointer with 1:05 remaining proved to be the dagger.

Samford’s starters combined for 67 of the 72 points as Guerrero and Brandon Austin each finished with 16 points, while Sharkey and Robert Allen added 13 each.

The Bulldogs shot 44 percent (27-62) for the contest, while knocking down nine three-pointers and going 9-of-12 at the free throw line. Samford missed all five of its shots in overtime.

ETSU wraps up its three-game homestand on Saturday when the Bucs host in-state rival Chattanooga. Tip-off is set for 4 p.m. inside Freedom Hall. Buccaneer great Greg Dennis will be honored pregame as his jersey will be retired.