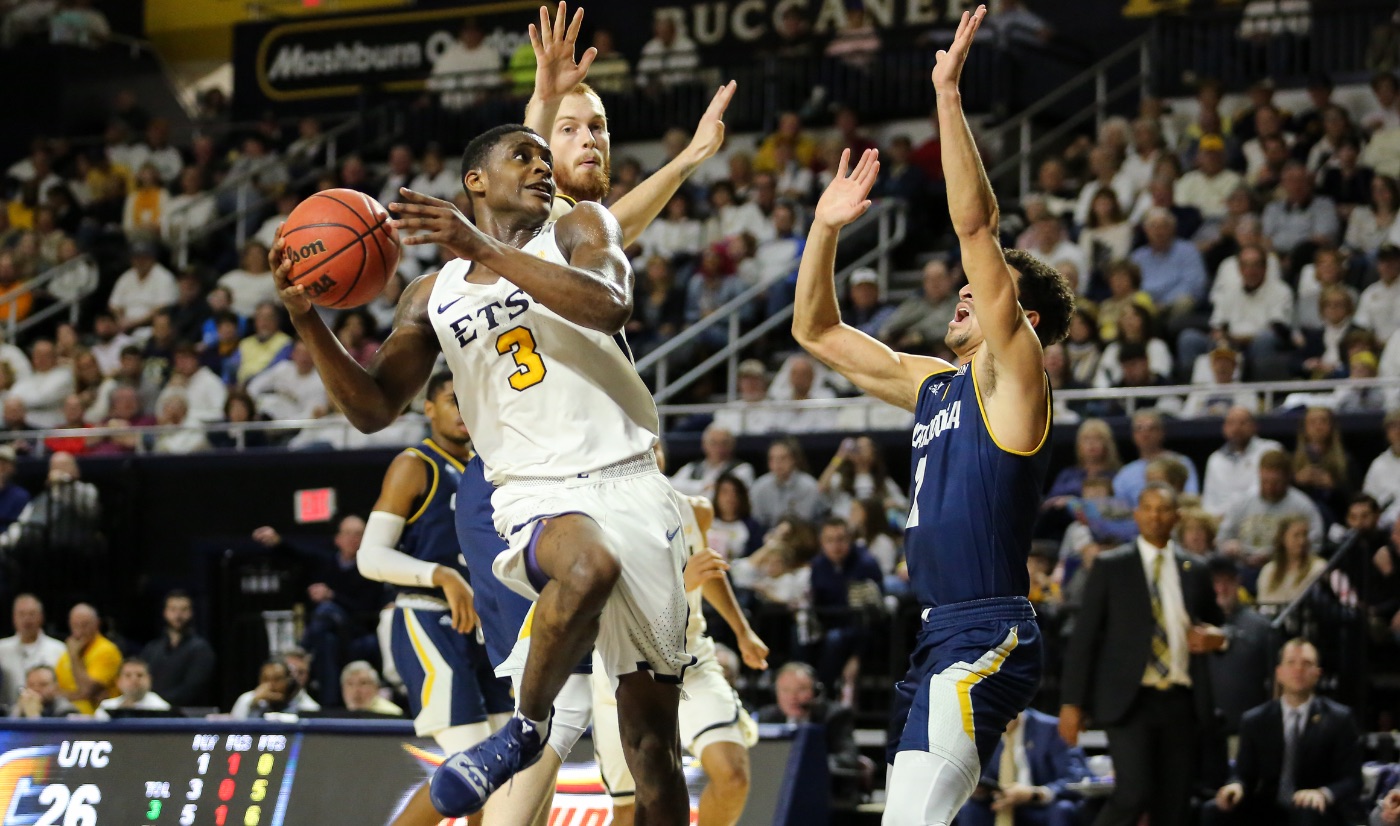 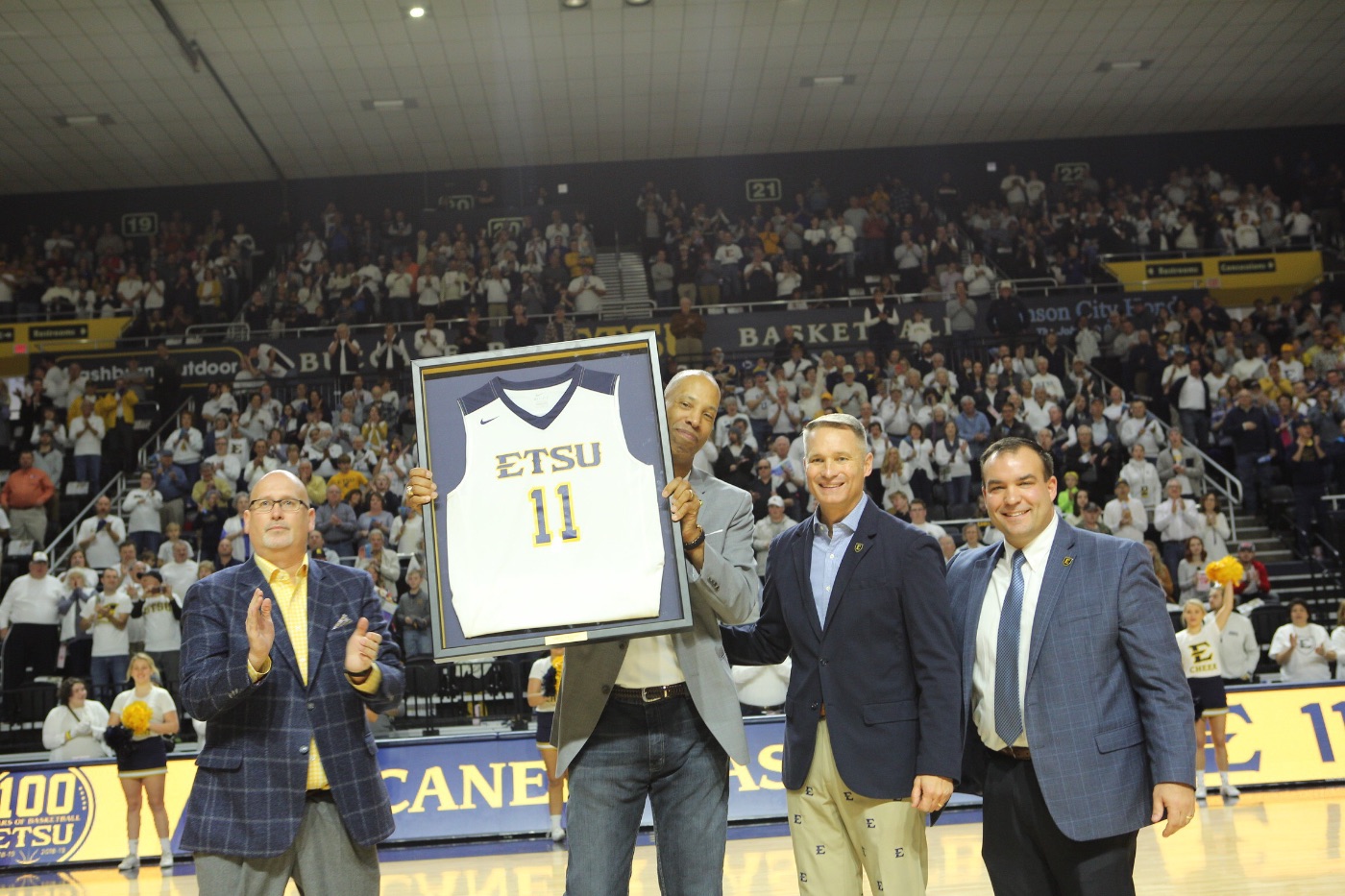 ETSU legend Greg Dennis had his jersey retired on Saturday.

The Bucs cruised to their fifth straight win and ninth consecutive at home as ETSU downed Chattanooga 96-70 in front of 5,011 fans on Saturday afternoon inside Freedom Hall.

After celebrating Dennis’ number 11 jersey being retired in the rafters during a pregame ceremony, the highlights started early for the Blue and Gold. The Bucs came out hitting on 13 of their first 17 shots en route to shooting 61 percent (36-59) for the contest, while finishing with a season-high 22 assists. ETSU also hit on a 50 percent clip from beyond the arc (9-18) and went 75 percent at the free throw line (15-20).

ETSU completed its homestand with three straight wins and improved to 13-4, 3-1, while its 9-0 home record is its best start since the 2003-04 team went 12-0 on the season. Saturday also marked the sixth straight win over Chattanooga, which matches the Bucs’ longest win streak over their rival – ETSU also won six straight from 1978-1981.

The Blue and Gold led for all but 59 seconds of the contest and the momentum quickly shifted when ETSU scored 16 straight points over a three-minute stretch to open a 31-16 lead after Boyd found Hodges for a lay-up at the 9:57 mark of the first half. The Mocs pulled within eight with 3:23 remaining, but the Bucs exploded again by scoring 11 of the final 12 points of the half to take an 18-point lead into the break, 52-34.

Hodges and Williamson combined for 21 points in the first half, while ETSU shot 61 percent (19-31) in the opening stanza.

The second half began just as the first half ended as ETSU extended its overall run to 15-2 and led 56-35 with 17:40 remaining in the contest. The Bucs’ lead eventually soared over 30 when Boyd converted on an old-fashion three-point-play to make it 79-48 at the 9:31 mark. With the rout on, ETSU recorded a 7-0 run to make it 88-56 when Williamson hit Patrick Good (Johnson City, Tenn.) for a three-pointer with less than six minutes to play, while the largest lead expanded to 33 (96-63) after Tre Tiller (Chattanooga, Tenn.) found James Harrison (Dallas, Texas) for a lay-up in the closing minutes.

For the game, ETSU totaled 48 points in the paint and outscored the Mocs 15-2 in fast-break scoring, while the Bucs’ bench pitched in with 47 points.

Over the three-game homestand, the Blue and Gold averaged 85.3 points and won by an average of 19.3 points. The Bucs shot 54 percent (97-179) in the wins over Furman, Samford and Chattanooga, while totaling 44 percent of their scoring in the paint (132 points) and 38 percent from the bench (113).

Donovann Toatley went 8-of-14 from the field to finish with 19 points, while Keven Easley hit three of the Mocs’ seven threes en route to adding 15 points.

The Bucs will now hit the road for the first time in 2019 as ETSU heads to Charleston, S.C. to take on The Citadel on Thursday night at 7 p.m.