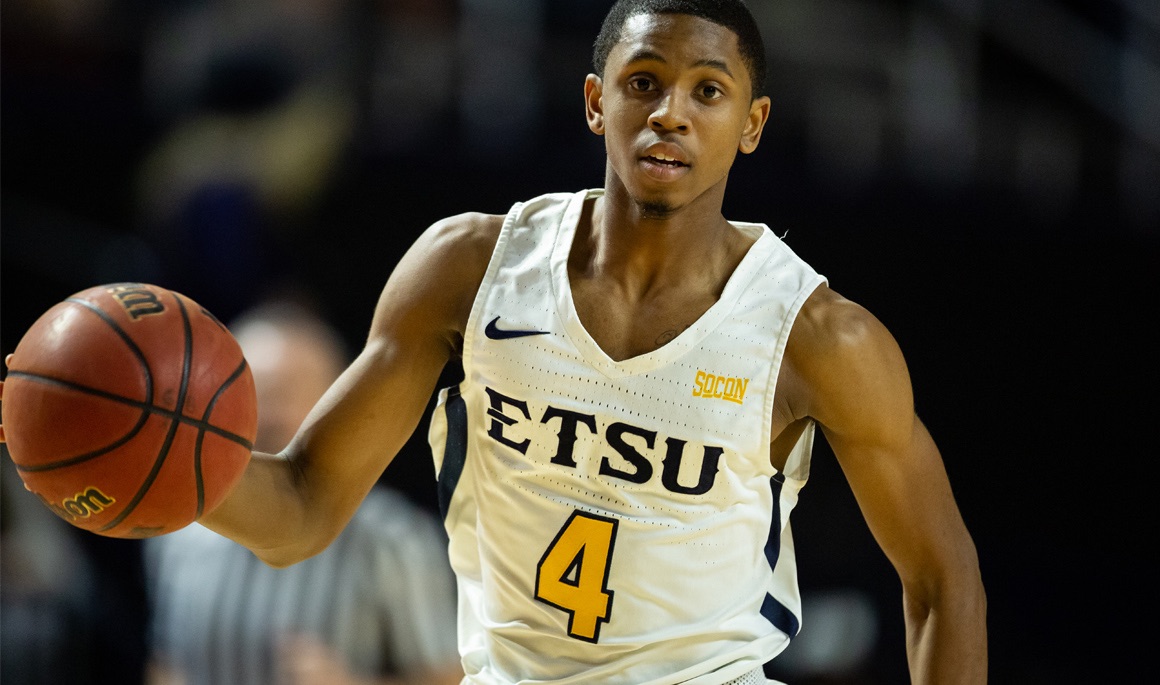 Freshman guard Daivien Williamson scored a career-high 24 points on 9-of-13 shooting in Thursday's 98-73 win over The Citadel.
Bucs use strong second half to roll past The Citadel, 98-73
ETSU at The Citadel | January 10, 2019
Related Links

JOHNSON CITY, Tenn. (Jan. 10, 2019) -- After taking a seven-point lead into the half, the ETSU men’s basketball team turned things into a higher gear in the second half.

The Buccaneers scored 24 of the first 27 points and scored 60 total points in the final 20 minutes en route to rolling to their sixth straight win, as ETSU defeated The Citadel 98-73 on Thursday night inside McAlister Field House.

As team, the Blue and Gold shot 56 percent from the field and knocked down a season-high 14 threes, while assisting on 24 of their 40 made field, which also set a new season best. ETSU won the rebound battle by 19, 50-31, and outscored the Bulldogs 25-9 in fast-break points.

Defensively, the Bucs held The Citadel – who entered the night as the top scoring team in the country – 24 points below its season average, while the 73 points were the Bulldogs’ second-lowest total this year. In addition, ETSU snapped senior guard Matt Frierson’s 52-game streak of making at least one three-pointer, while he was held scoreless for the first time since Feb. 11, 2017 (vs. VMI). Frierson began the day as the Bulldogs’ leading scorer at 15.6 points per game.

The Bucs made history with their win.

For the fifth time this season, ETSU enjoyed a wire-to-wire win.

Bo Hodges (Nashville, Tenn.) found Williamson in the corner for a three-pointer for the first points of the game and the Bucs never trailed following the bucket 25 seconds into the game.

From there, the game was tied twice – then with the Bucs leading 11-9 – the Blue and Gold scored 10 unanswered points to go ahead, 21-9 with 11:40 remaining in the half. The Bulldogs pulled within four points on two different possessions, but ETSU scored seven of the final 11 points of the half to take a seven-point lead into the break, 38-31.

After the Bulldogs made a tip-in at the buzzer to end the first half, the Bucs came out firing following the break as ETSU scored 24 of the first 27 points and led 62-34 when Rodriguez found Tisdale for a lay-up with 12:56 remaining in the contest.

The Bucs extended their lead over 30 when Kevon Tucker (Dacula, Ga.) hit Williamson on the break for a lay-up, making it 76-45, and eventually went up by 32 (78-46) with just under seven minutes to play.

For the game, the Bulldogs were held to 35 percent shooting (26-75) and had seven shots blocked, marking a season-high for the Blue and Gold.

The Bucs will wrap up their two-game SoCon road swing on Saturday when the Bucs take on Mercer. Tip-off is set for 4:30 p.m. inside Hawkins Arena.