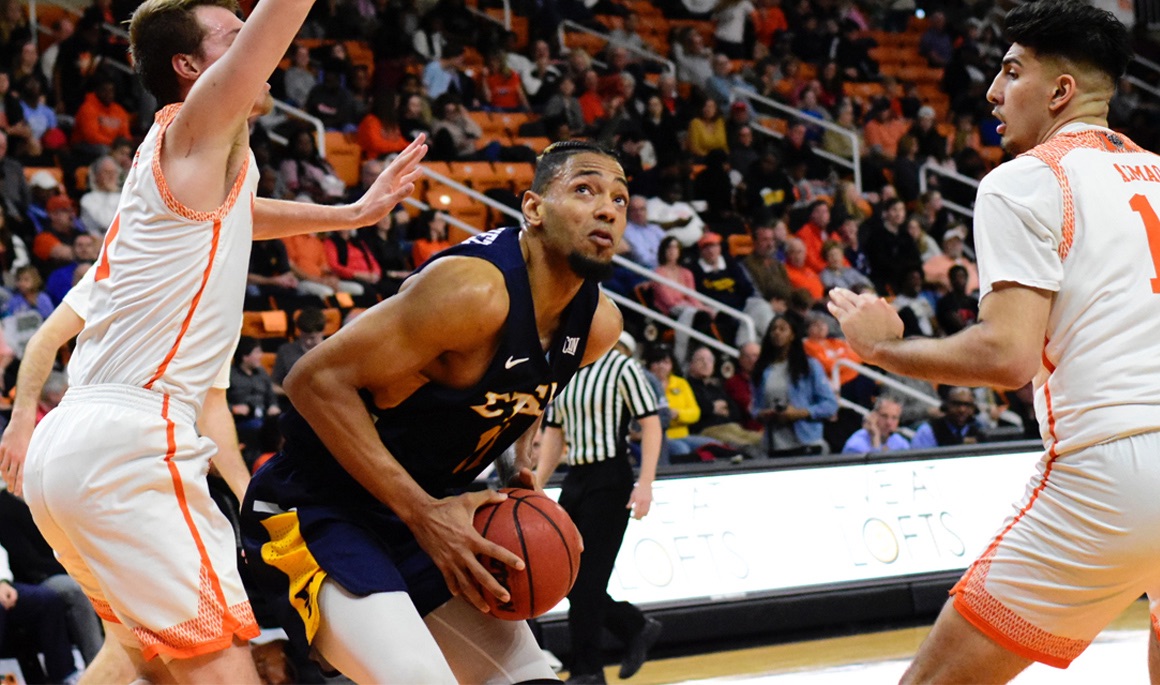 MACON, Ga. (Jan. 12, 2019) -- Sparked by a hard-fought and gritty performance, the ETSU men’s basketball team kept several streaks alive as the Buccaneers battled their way to a 72-68 overtime win over Mercer on Saturday evening inside Hawkins Arena.

On a night where the Bucs went nearly seven minutes without a point in the first half and shot 39 percent for the game, ETSU showed its toughness by grinding out a conference road win. Led by a 20-point, 18-rebound performance by junior forward Jeromy Rodriguez (Santiago, Dominican Republic), the Bucs overcame a 10-point second half deficit to secure a Southern Conference road sweep.

Rodriguez, who provided the go-ahead bucket with a tip-in at the 2:49 mark in overtime, finished with his 11th double-double of the season, while sophomore guard Patrick Good (Johnson City, Tenn.) finished with 13 points, including sinking the game-clinching free throws in the closing seconds. Sophomore guard Bo Hodges (Nashville, Tenn.) also scored in double figures by netting 10 points, and sophomore forward Mladen Armus (Belgrade, Serbia) added four points and 11 rebounds before fouling out with 1:35 remaining in overtime.

As a team, the Blue and Gold went 27-of-70 from the field, while knocking down seven three-pointers and holding a plus-27 rebound margin, 50-23. The Bucs totaled 27 offensive rebounds, which resulted in a 20-5 advantage in second-chance scoring, with Rodriguez and Armus combining for 13 offensive rebounds. Despite seeing Mercer go to the free throw line nine more times on the night, ETSU made the most of its opportunities as the Bucs went 11-of-12 at the line.

With the win, ETSU kept three streaks intact en route to improving to 15-4, 5-1. The Bucs have now won seven straight games, nine in a row against Mercer and their last seven in overtime. Mercer, who suffered just its second home loss of the season, dipped to 6-11, 1-4.

After a rough first half where the Blue and Gold had to overcome shooting woes, ETSU only trailed by four heading into the break, 32-28. Following back-to-back free throws from Hodges at the 9:44 mark, the Bucs didn’t register another point until Rodriguez also made two free throws to cut the deficit to 27-20 with 2:54 left before halftime. Following a Mercer lay-up on its next possession to go back up nine, ETSU closed the final two minutes and forty-one seconds on an 8-3 run to take some momentum into the locker room.

Unfortunately, the Bears opened a 10-point game early in the second half as they went ahead 40-30 with 17:51 remaining in regulation.

From there, the tempo changed as the Bucs started to press and it sparked a run.

Following Good’s three, Mercer scored the next five points, but then Bucs zoned in and mounted a 15-3 run to go ahead, 56-50 following a tip-in by Kevon Tucker (Dacula, Ga.) with less than seven minutes remaining in regulation.

The Bears put in another charge and went back ahead 61-59 when Ross Cummings hit a three from the top of the arc with 3:04 remaining, but that would be the last time Mercer would lead.

Hodges quickly tied the game at 61 on the next trip down the floor – and after getting another stop – Rodriguez followed with a tip-in to make it 63-61 with 1:23 left to play. However, after both teams turned the ball over, the Bears pulled back even at 63 on a lay-up by Ethan Stair, and the Bucs missed two chances at game-winners, which moved the game into overtime.

After both teams traded baskets in the first minute and a half of the extra fame, Rodriguez’s tip-in with 2:49 remaining put ETSU back on top for good at 67-65. Mercer inched back within a point when Cummings sank both free throws with 19 ticks showing on the clock, but Good stepped to the line four times in the closing seconds and made all four attempts to seal the win.

ETSU returns to action on Thursday night when the Bucs host VMI at 7 p.m. inside Freedom Hall.