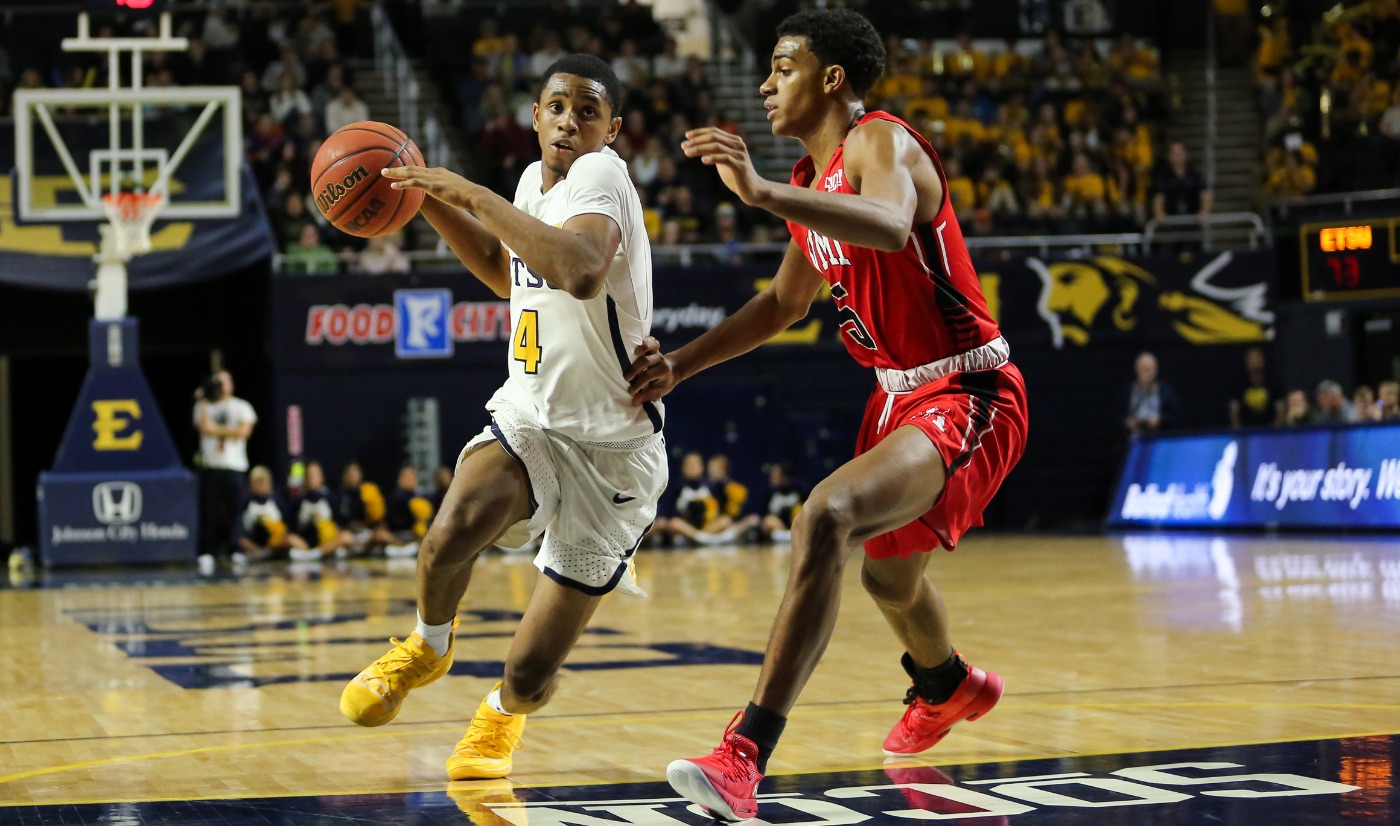 Buccaneer duo combine for 40 points; Armus comes up with big block at the buzzer

Williamson, who was 9-of-12 from the field, netted a team-high 23 points and Hodges added a season-best 17 points to help move the Blue and Gold past the upset-minded Keydets. Junior Tray Boyd III (Memphis, Tenn.) pitched in with 13 points; however, Armus came through with the biggest play of the night when he blocked sophomore guard Bubba Parham’s three-point shot at the buzzer to secure the win. Armus finished with eight points (4-of-6 shooting), eight rebounds and the one block.

Despite leading by as many as 21 points midway through the first half and by 14 at the break, ETSU couldn’t put away the Keydets in the second half.

After the Bucs made the first bucket of the second half on a fast break lay-up by Jeromy Rodriguez (Santiago, Dominican Republic), VMI then mounted a 15-3 run over the next four minutes to pull within four, 52-48 with 14:51 remaining.

ETSU answered with six straight points to go back up 10 and the brief spurt looked to have given momentum back to the Buccaneers.

The Bucs kept their lead around double digits for the next eight minutes; however, Parham got hot and VMI rallied back.

With less than five minutes to play ETSU led by 12, but Parham hit three, three-pointers over a two-minute span to make it an 81-78 score with 2:47 showing on the clock.

Both teams traded baskets down the stretch, but after Patrick Good (Johnson City, Tenn.) missed the front end of a 1-and-1 with 13 seconds left, VMI grabbed the defensive rebound and had its chance to tie the game. However, after getting the ball in Parham’s hands, Armus stepped up to block the game-tying attempt at the buzzer.

Parham, the SoCon’s leading scorer, finished with a game-high 25 points on 7-of-15 shooting (5-of-11 from three). Myles Lewis posted 17 points and nine rebounds, while Jake Stephens added 10 points and five rebounds.

The Bucs now gear up to host reigning SoCon champion UNCG on Saturday. Tip-off is set for 4 p.m. inside Freedom Hall. The game is a “Gold Out” so fans are encouraged to wear their gold Buccaneer apparel.