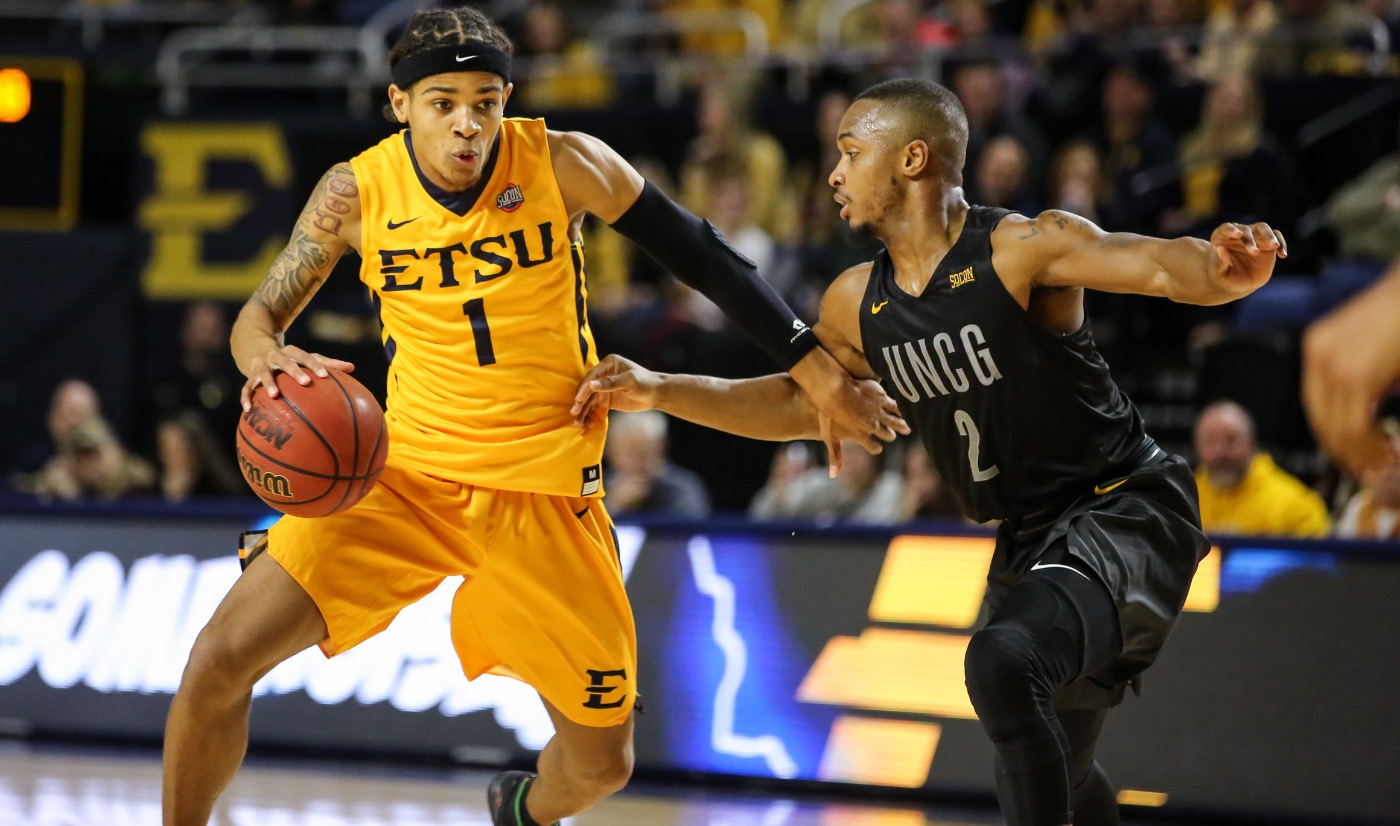 Tray Boyd III scored all of his team-high 17 points in the second half on Saturday.
ETSU has win streak snapped in 75-68 loss to UNCG
UNCG at ETSU | January 19, 2019
Related Links

JOHNSON CITY, Tenn. (Jan. 19, 2019) -- The ETSU men’s basketball team saw its pair of win streaks come to an end as UNCG dealt the Buccaneers a 75-68 setback in front of a season-best 5,702 fans on Saturday evening inside Freedom Hall.

In rematch of the last two Southern Conference championship games, the Blue and Gold could not get anything going offensively in the early stages, while the Spartans, who average just under eight threes per game, knocked down 11 of their 22 attempts to hand ETSU its first loss since December 15 – snapping its eight-game win streak.

After falling behind by 16 points early in the second half, junior guard Tray Boyd III (Memphis, Tenn.) gave the Bucs a spark by draining three consecutive three-pointers, but despite pulling within 50-44 with 10:46 remaining in the contest, ETSU didn’t have enough to get over the hump.

Boyd, who scored all of his team-high 17 points in the second half, accounted for five of the Bucs’ seven made threes, while junior Jeromy Rodriguez (Santiago, Dominican Republic) posted his 12th double-double of the season. Rodriguez ended with 16 points and 14 rebounds, and sophomore Bo Hodges (Memphis, Tenn.) – the lone Buccaneer to connect on a three-pointer in the first half – totaled eight points, five assists, three blocks and three steals.

The Bucs held Francis Alonso to 15 points on 4-of-13 shooting, but it was a pair of forwards in Kyrin Galloway and Angelo Allegri that give ETSU fits all night long. The Spartan duo combined for 29 points on 11-of-14 shooting and 7-of-8 from beyond the arc. Galloway made all six of his attempts to finish with 14 points, while Allegri – who entered the game with nine made threes on the season – was 5-of-6 from three and added 15 points off the bench. James Dickey finished with 10 points, nine rebounds and four blocks in 22 minutes.

Despite the large crowd and build up to the game, ETSU missed on its first four shots and fell behind 8-2 early. After pulling within a point five minutes into the contest, UNCG used a 9-2 run to go ahead 17-9 following a three-pointer from Demetrius Troy with 12:47 left in the first half.

The Bucs were able to cut the deficit to three later in the half, but after making it a 22-19 game at the 7:08 mark, the Spartans pushed their lead to 10, 36-26, following a pair of free throws by Alonso with just under two minutes to go. ETSU,j who only made one jump shot in the opening 20 minutes, got a lay-up from Isaiah Tisdale (Lexington, Ky.) with 28 second remaining to make it a 36-28 game at the break.

UNCG opened the second half on a 10-2 run to see its lead balloon to 16, 46-30; however, that’s when Boyd’s long-range shooting kicked in and the Bucs fought back.

The Bucs scored the next nine points on three straight triples from the Memphis native, but after having three possessions to make a bigger dent in the comeback, UNCG stopped the surge with a steal and fast-break dunk by Isaiah Miller to go back up by nine.

The closest ETSU would eventually get would be six when Boyd found Rodriguez for a dunk to make it 50-44 with 10:46 to play, but the Spartans scored the next five points to grab momentum.

UNCG’s lead remained in double figures until the Bucs clawed back to within 69-63 with a minute to play, but ETSU was unable to cap off the comeback and suffered its first home loss of the season.

The Bucs will now embark on a three-game SoCon road trip beginning next Saturday when ETSU takes on Western Carolina in Cullowhee, N.C. Game time is set for 7 p.m.