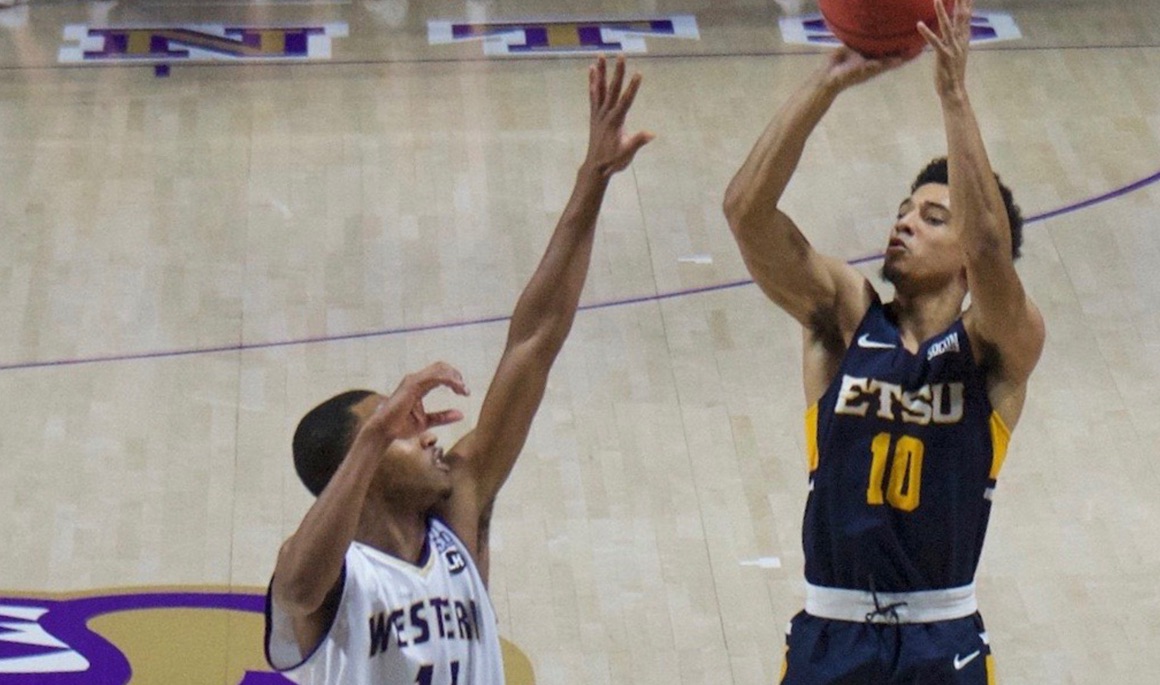 Good sets school record with 11 made threes; Becomes only the 16th player to score at least 35 points in a game

The Buccaneer guard set the program record with 11 made threes en route to finishing with a career-high 35 points, as ETSU men’s basketball defeated Western Carolina 91-69 on Saturday night inside the Ramsey Center.

Good, who became the 16th player in program history to score at least 35 points in a game, broke Courtney Pigram’s record of 10 made threes, which was set back on Feb. 28, 2009. The Johnson City, Tenn. native went 12-of-18 from the field (11-of-17 from beyond the arc) and bested his previous career scoring mark of 21 points – occurred twice when he was at Appalachian State.

Good wasn’t the only Buccaneer to have a career game as sophomore forward Mladen Armus (Belgrade, Serbia) turned in one of his best nights in an ETSU uniform. Armus, who totaled his fourth career double-double, scored a career-high 21 points (9-of-13 shooting) and grabbed 12 rebounds. Junior Jeromy Rodriguez (Santiago, Dominican Republic) also scored in double figures as he netted 14.

The Bucs set the tone early as they jumped out to a 17-3 start and never looked back. Good connected on his first triple just over three minutes into the game, with his second capping off the run in the opening four and a half minutes.

Western Carolina was able to cut the gap to nine on two separate possessions, but Good’s hot shooting helped propel ETSU’s lead back into double figures.

The Johnson City, Tenn. native knocked down his third three-pointer to give the Bucs a 26-14 lead with just under 10 minutes to go before halftime, while his fourth triple came six minutes later and the fifth and final one of the half followed a minute later to make it 40-23 with 2:20 left before the break.

For the half, Good totaled 15 points on 5-of-6 shooting from three, while ETSU went 17-of-31 (55 percent) from the field and 6-of-10 from beyond the arc. The Blue and Gold forced the Catamounts into 13 first-half turnovers, resulting in 20 points for the Bucs.

Good came out on a mission to start the second half as he made his first four threes in the opening five minutes of the stanza and extended the Bucs’ lead to 23, 61-38.

Sandwiched in between the run of triples by Good, the Bucs also put on a dunk show as they threw down five slams over a five-minute stretch in which Armus, Rodriguez, Lucas N’Guessan (De Lier, Nethleands), and Kevon Tucker (Dacula, Ga.) all rocked the rim. Overall, the Blue and Gold recorded seven dunks on the night.

Freshman guard Kameron Gibson finished with a team-high 28 points for Western Carolina, while Carlos Dotson added his ninth double-double of the year (15 points and 11 rebounds).

The Bucs continue their road swing on Thursday night as ETSU takes on Samford at 7:30 p.m. ET inside the Pete Hanna Center.